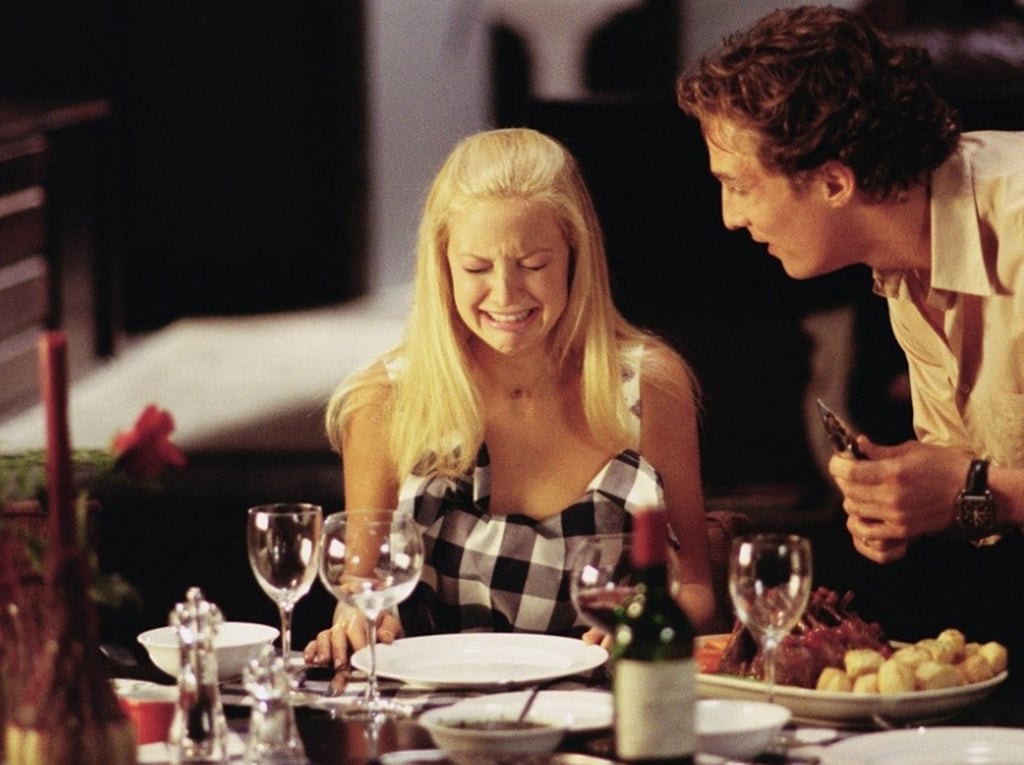 Ever find yourself on a first date that you think you're just killing? You're charming. You look great. If this were a job interview, you'd get an offer tomorrow.

Then a day passes, a week, a month, and . . . nothing. Or you get a slew of excuses, flaking, and cryptic emoji until all signs point to he or she is just not that into you.

WHAT WENT WRONG? Were you TOO charming?!

I've been on both ends of this situation. Like a few weeks ago, I was on a first date with a very cute and charming guy . . . Until . . .

He didn't know what an old fashioned was. As in the drink I like to sip on as I pretend to be fascinated in my date's journey at CrossFit.

Perhaps this is a shallow dealbreaker. But to me it represents taste and awareness. Unless you're Frank Sinatra. There's nothing more unattractive to me than an alleged man ordering a jack and coke. Are we going to a frat party later? Unclear.

Then I began to wonder, am I too picky? Are my standards so unreasonably high?

We all have dealbreakers; some call them red flags, others nonnegotiables. And for every person this varies.

So I thought I'd do some research. Polling friends, co-workers, and Tinder dates, both guys and girls, gay and straight, I attempted to uncover why there wasn't a second date. Here are some tips I learned:

"If his car is dirty, then his house must be dirty. I don't want to be a mom. That's why I met my last guy at a carwash."

2. Cool It With the Future

"I met a girl on OkCupid. We were an 87 percent match, which practically means we're soul mates, right? Any time we talked about our likes/dislikes she would relate it to our future together. Like, 'you like pancakes? I'll make pancakes for you!' Or, 'wait until you taste MY chocolate chip cookies.' And 'I can't wait to show you what I'm learning in dance class!' Way too much, way too soon."

"He didn't look like his profile picture. That worries me, cause WHAT ELSE IS HE LYING ABOUT?! Good thing he didn't post any d*ck pics on Tinder, because those probably wouldn't be to scale."

4. Remember, Captain Planet Is Our Hero

"As I'm about to sit down in the passenger seat, he takes the garbage that was lying there and THROWS IT OUT THE WINDOW. Just straight up litters. Obviously, I'm horrified, because I'm sitting in a car with America's biggest problem. His reasoning? 'It creates jobs.'"

"I had a JDate bring her newborn baby to a bar in her JanSport. We then proceeded to discuss the absence of the father over appletinis."

"I was on a pleasant date when the guy revealed himself to be a Republican. That wasn't a deal breaker. But when he implied that he didn't know The Colbert Report was satire, I knew there wouldn't be a second date."

"He got wasted and started making fun of every other guy at the bar. He also had a hair complex and stupid shoes."

"The first guy I ever dated from the inter webs, said to me, 'you're a lot lighter than I thought you'd be.' I thought he was talking about my skin color. But nope! He corrected me! He meant to express his relief that I wasn't as fat as he thought I would be. THANKS BRUH, you could have just played along!"

9. Know How to Order

"He ordered a strawberry daiquiri at a wine bar. Just, no."

"He asked me out by saying, 'You should let me buy you a drink,' and then he DIDN'T BUY MY DRINK. He also mentioned he'd driven, 'all the way from Echo Park to West Hollywood,' to meet me, so we should put the drinks on my tab."

"I won't ask for a second date if there's no attraction, if we're exact opposites or if the date just bores me and I end up drinking three martinis."

"I was seeing this girl and on our second date she told me that her mom loves me. I was confused, since I never met her mom. And then she revealed that she told her mom everything about me, and her mom thought I was perfect for her. I couldn't see her after that. It was way too much pressure."

"She was so religious that she tried to convert me."

"She talked about her one semester abroad in Rome like she was the Pope. But then again, agreeing to go on a date with me is somewhat of a deal breaker."

"There wasn't a second date because he was married."

There you have it. Why there wasn't a second date. Not trying to date shame here, rather to help you learn and grow. I think this all boils down to self-awareness. Be present. Try to read your date. If your date seems uninterested, quiet, checking their phone, or scared, then you're probably not "killing it." Hopefully this insight can help guide you through your dating endeavors. Or at least give you something to laugh about. If you need me, I'll be drinking an old fashioned at the mixology bar of the moment.

TikTok
Am I the Only One Who Tried the Baked Feta Pasta Recipe and Hated It?!
by Kalea Martin 5 days ago