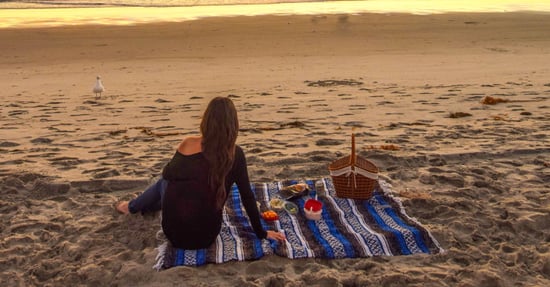 A few weeks in California. My best friend, her baby . . . and three Tinder dates. Well, that escalated quickly. Let's back up a smidge here. I was visiting my BFF (since seventh grade) on the left coast, working from her place, and making her show me around, naturally. We adventured, ate pints of ice cream, cheers-ed at local breweries, and watched the entire two seasons of Stranger Things in an unreasonable amount of time. The other key piece I should mention here is that we had a third wheel for all of these best-friendly activities in the form of her wildly adorable 6-month-old baby. We were a glorious trio, the three of us.

As someone who travels regularly, I'm used to swiping on Tinder in different cities, regions, and areas of the world. It's incredibly entertaining, and well, I'd be lying if I didn't admit there's always that sliver of hope that I might unearth an end-all-be-all connection. My friend, having gotten hitched before Tinder was a thing, backpacked onto mine and swiping left or right became a joint effort between marathon episodes.

We swiped, we "oo-ed", we "ahh-ed", we cringed, and we assessed while wearing our pajamas and stuffing our faces with junk food. And, somehow, we set up three dates with my "give zero f*cks" attitude. To be fair, I did the chatting and organizing of said dates; she agreed to go and judge us. Why did she have to come? She was my ride, and I was there to spend time with her, so she was invited by default on both accounts. And boy, was she a little too happy to be a proverbial fly on the wall.

But first, I had to weed through the dudes. Who would be willing to go on a first date with someone and their best friend plus baby? WHO? Turns out, plenty of people, actually.

Related:
The Ultimate Best Friends Bucket List — Cross These Off With Your BFF!

There were, of course, a handful of suitors that didn't make the cut. The ones I didn't match with were the most obvious. Whatever. Then there's the "matched but didn't message me" species which means we will never, ever know what magic could've unfolded. (There are some traditional dating things I employ, and personally, I never message a guy first.) Their loss. We can't forget the ever-classic "no effort" guys whose witty opener is usually "hi" or "hey" — which I have no patience for. Where are your clever chops? Byeee.

Then there was the "too hot" guy that I sassed and he liked it. He was on the hunt for nonlocal girls that like to put out. I was not one of those, and he took this as a challenge. At his suggestion to meet up, I released a family of crickets and didn't look back . . . except a few times because he had the face of a god. People shouldn't be that pretty.

Then we had the fella that went hard and fast out the gate, promising me grilled cheese and never following through. That kind of betrayal will get you on the sh*t list real fast.

But enough about the losers; there were a smattering of takers, and I was simultaneously nervous and excited by how this would all play out. I had to wonder — would this three-women show be a hindrance, or the perfect icebreaker I had never thought of?

It does not go unnoticed that there were three guys, three dates, and three girls. (That all happened by accident; I do not have a thing with threes.) That being said, the three lucky gentlemen were as follows:

J mistakenly got two dates. The first, I was actually solo and opened up a 15-minute window for a quick meeting since he was "nearby" the cafe where I was pounding away on my laptop keys, high on coffee. It went all right, but something was off. I chalked it up to being distracted, pressed for time, and an intense need to use the bathroom, so if I'm being honest, I just wanted him to leave. Feeling as though I hadn't given him a fair chance, I agreed to J meeting our charming trio for a rooftop happy hour drink to gain the input of my friend.

Since he had divulged his slight disdain for kids at the first meeting (red flag number one), I was anxious to see how he'd interact with our fourth half-person wheel. He pretended seemingly well, but I knew the truth. He talked 98.9 percent about himself in a smug manner that confirmed my suspicions of douchebaggery. As I sucked down my beer to avoid conversation, I let my bestie take the reins. It was clear that I was not interested, but only to myself and my friend. Conversation steered to a preference of being ghosted or straight up honesty when dating. You know, because asking for a friend. He said he'd always prefer to be ghosted, and I took a secret note.

Best Friend Musings: "I knew in the first three seconds that he wasn't for you."

He said ghosted, so that is what he got.

M and I had the briefest of conversations with a fast spark-like connection that resulted in agreeing to rendezvous for a stroll on the boardwalk by the beach. Doesn't get more romantic than that . . . unless you add in your best friend, her baby, and the fact that he had been playing volleyball all the sweaty day long. The baby smiled within seconds of meeting him, and although his scent was reminiscent of a gym sock, he was charming, cute, and exactly my kind of danger. We joked about riding tandem bikes together and I plotted to MacGuyver anything I saw with two wheels together within a .1 mile radius to make my dream come true. I was in trouble, and it was totally unexpected. He low-key snuck his arm around me . . . pretty sure my shorts melted straight off my body. He laughed at all my jokes . . . checkmate. Our conversation flowed and the banter was on point . . . I think I just moved to California permanently. I really kinda definitely liked him, and of course, never heard from him again.

Best Friend Musings: "He totally checked out your boobs after you hugged."

B was the tallest guy I'd gone out with since junior prom — and that guy was a giant. He was giraffe-size and funny as hell. We had badminton banter, which for me is a Tinder/texting must. I was, however, thrown by the amount of sexual innuendos. They seemed harmless and a bit forced. Was this guy really as horny as he came off, or was it just a nervous thing he did? I was determined to get to the bottom of it over sushi. It was risky inviting him for dinner, but we were hungry and the happy hour deal was legit. Luckily, he was goofy and kind and got along with our trio in mere seconds. Whatever the weird overly sexual vibe he casually gave off before didn't accompany him on the date. He fit in as part of the group and at some point over dinner, I think he became the baby's honorary uncle. Overall, it was a fun time. I could be really good . . . friends with this guy.

Best Friend Musings: "I really liked him! I want to be friends with him!"

Going on dates with your best friend (and her baby) in tow sheds new light on the concept of a "third wheel." It was good, it was bad, and it felt a lot like having a chaperone. The guys were surprisingly agreeable to this eccentric style of date, and that might have been the most shocking aspect. What have we learned other than babies are a great judge of character and best friends know you sometimes better than you know yourself?