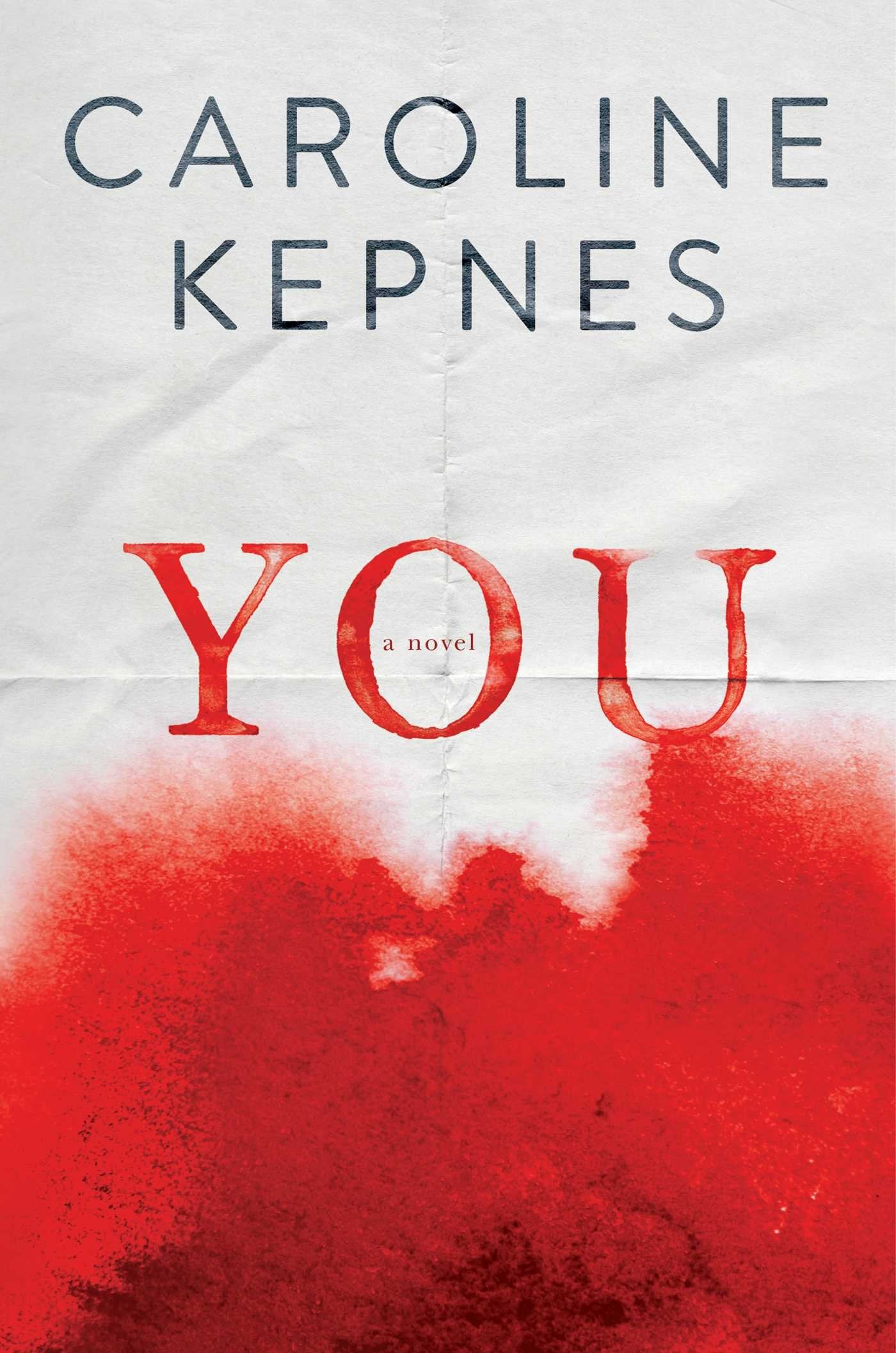 Writer Caroline Kepnes's disturbingly addictive relationship thriller You is custom made for the pop-culture obsessed. A former editor at both Tiger Beat and Entertainment Weekly, Kepnes is just as likely to reveal her characters' inner selves through their love for Pitch Perfect or memories of David Bowie songs as she is by dreaming up details about their childhood or mannerisms. In fact, when I met Kepnes for coffee in LA, she actually clapped with delight when talk turned to TV (her current obsession is The Affair). It's clear the author's pop passions struck a chord — less than a year since it was first published, the book has already been translated into 18 different languages.

Kepnes's novel about obsession and lust — the story is told from the perspective of her main character, Joe, whom she describes as a "narcissist with borderline personality disorder" — was bound to be compared to Gone Girl. Beyond the books' manipulative main characters, they also share a cinematic quality, and Kepnes was coy when I asked about whether or not a film adaptation of You could be in the works: "Um, can we talk about something else?" Film rights aside, the book is swiftly gaining a legion of fans, including Stephen King. The horror master has tweeted his praise for the novel more than once, calling it "really creepy, but weirdly funny" as well as "hypnotic and scary." Read on to find out how Kepnes discovered her passion for writing and for a preview of You's upcoming sequel. Then, read the first two chapters of You on POPSUGAR.

POPSUGAR: At the risk of sounding like a total freak, I read your entire book in one night. I just could not put it down.
Caroline Kepnes: I love that. I love that feeling!

PS: It sounds like your experience writing it was kind of like that, too.
CK: Yes. I think my thumb is permanently damaged. I would literally have to stop writing because my fingers were bent. I would get in the car, and I would be at a stoplight, writing in my phone. It just wouldn't shut up, in the best way. The first draft I wrote very quickly, within a few months. I wrote the first 40 pages over a few weeks, and then I wrote the rest of the book in a few months. I would just wake up wild-eyed — that's assuming I was able to sleep — and then drive like a maniac to a coffee shop and write all day.

PS: Considering how engrossing the writing process was, did it take a toll on you to live with a character like Joe?
CK: Yeah. I've written a lot of short stories about people who are similar, but those are obviously much shorter, and then you're done. But yes, it stays with me, and I'm working on the sequel now. It picks up not so long after where we left off. Amy is an employee of Mooney books, and she's also Joe's Goldberg's girlfriend.

PS: People might question whether they can live inside this character's head for a whole book when they start reading it, but there's something so genius about the way you draw people into his logic.
CK: Well, I love psychology. I studied abnormal psychology, and I've taken a million classes, and I love getting in people's heads. I've been reading this website where they have prisoners looking for pen pals. And I love reading the ones where they have a solid voice and you hear the genuine remorse, and then the ones that you can tell, "This is the part where I try to sound like a good guy."

PS: In You, the bookstore where Joe works is almost its own character. Are you a big fan of old-school bookstores and actual, tangible books?
CK: I am. I love bookstores. I just reluctantly read my first book on my phone, and I get it, and I loved it, and I'm sure it's even better on a normal-sized reading device. But I love bookstores. The atmosphere. I love movies that are set in bookstores, I love bookstore stories. When I was a child, it was my favorite place in the world. I want to keep them around, so I thought, "Oh, if I set a book in a bookstore, then they stay." When you walk into a bookstore and see you all these books, there might be one that you would never otherwise have found that you pick up. I'm a hoarder. I like looking at them, and I worked at a used bookstore. I had an old copy of Love Story in hardcover that I'm obsessed with and just pet sometimes.

PS: I really enjoyed all the pop culture references in the book, but I feel like some authors are almost afraid to include them because they worry it will somehow take away from the timelessness of the story. Did anybody suggest that you shouldn't?
CK: No, because fortunately [my publishers] read what I had and they were on board from the beginning. I felt, too, that the story's strong enough that you could take them all out and there would still be a story there, and that's what matters to me. I felt like they help tell the story but they're not just window dressing. And I loved the device of Joe reading into these things and how much they mean to him. Hannah and Her Sisters is a movie I love and I've seen a million times, but I loved how Joe thinks it's a stalking love story. American Psycho was one of my big influences, because Bret Easton Ellis is someone who writes unabashedly about pop culture. I remember reading that in high school and shaking my head, like "Oh my god! You can do this. You can write about Whitney Houston for five pages in a novel and it's still part of the story."

PS: But sometimes writers are so precious about it! Like, "Oh, I don't want to have my character send a text message!" But it's our reality now.
CK: It is our reality, and for me, I can tell when [writers] are consciously trying to stay away from that. I don't want to say it's easier, because every era is different, but think how much easier it was to tell a horror story without cell phones. Now, someone has to drop the cell phone or be out of range. There are new challenges.

PS: There have been a lot of comparisons between your book and Gone Girl. It does seem like there's a desire for these relationship thrillers lately. Is there something about the cultural moment you think is sparking that?
CK: Well, I worked with Gillian at Entertainment Weekly years ago. I was so excited for her! And yes, I kind of think so. I feel like it comes from hypercommunication. We're so in each other's lives. There's such an anxiety now, thinking that we know everything about everyone — and we don't — and thinking that if you're upset with your life, well, it'll make me feel better to project happiness. These devices and all the networking allow us to have such a discrepancy between what's real and what we're projecting. I like that character of Amazing Amy in Gone Girl in that way, for being someone who seems perfect. It's a great symbol of the Facebook person that we're all trying to put out there.

PS: Talk about the dynamics of how you think cell phones and social media have changed relationships for people. For example, if you go on a first date with somebody, you're likely going to Google them beforehand.
CK: And there are schools of thought on that — that you shouldn't or you should. I could never say that you shouldn't, because I'm human. I can't imagine not doing it! The lack of mystery is what's fascinating to me. That's a big change and I think where these stories are compelling to people. Mystery is just nice. It's nice to wonder who someone is, to be surprised, and there's just not a lot of that. If you're always sharing, then you're never holding anything back, and that is creepy to me. There are so many levels at which it's mixed things up. I'm obsessed with Deathbook — what happens when someone dies — or when people hit the "like" button on a status like "Today my brother passed away." There's no sympathy button, and everything has been reduced to "like" or retweet. It's dangerously simple that way.

PS: Why all of a sudden do we need characters to be likable? Especially characters written by women?
CK: It is a new phenomenon. It's a story! It's fiction! In some of my favorite books, the people are all unlikable, but it would never have even occurred to me to say that. I grew up watching Knots Landing, and they were all horrible people! Shallow and vapid, but I loved them, and I would have joined that world in a second. The likability thing is very modern, and I think it does relate to social media and wanting everything at least having a nice surface. My thought is often, OK, this person seems awful, but how can you find your way into them? There's comedy in horrible people . . . And we can all be unlikable, and we know it.

PS: You've written in every kind of genre you can really think of: screenwriting and journalism and YA novels and TV. What's your journey been like as an author?
CK: I love writing, straight up, and when I went to college, I thought this would be my dream job. But you know, you can't graduate and go get a job writing novels. I did lot of journalism in college, and I started in high school. My brother was in the movie School Ties, and I went to the set, and it was literally like Ben Affleck, Matt Damon, Chris O'Donnell. All of these guys around. And I thought, how can I talk to them? And I thought, "Oh, this is why journalism exists!" And I was already writing. It wasn't like complete, sheer stalking. [Laughs.] So I cold-called YM Magazine, and this woman Linda Friedman answered. I was literally like 15. And Linda was the only person in the world who wouldn't be like, "Sure, give me your phone number and I'll call you back." She said, "OK, how do we do this?" and explained to me about publicists and contacts, and I interviewed Chris O'Donnell and it was in the Cape Cod Times. She's one of my heroes. But no matter what I was doing, I always wrote fiction. I went from Tiger Beat to Entertainment Weekly. I'd chosen Tiger Beat over a job at Condé Nast, and they were like, "What?" And my parents were like, "What?" But it was the Backstreet Boys! And then when I went to Entertainment Weekly, they were fascinated that I worked at Tiger Beat. So, follow your heart!

Elliot Page
Elliot Page's New Memoir Is a Pivotal Win For the Trans Community: "It Didn't Feel Possible"
by Chanel Vargas 4 days ago