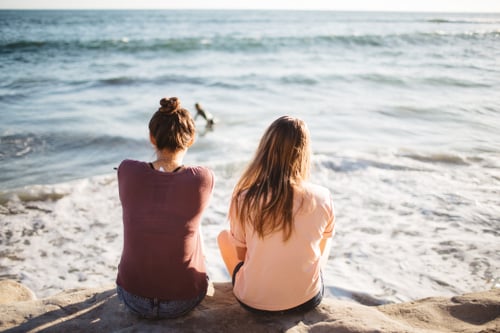 My best friend of 20 years has always been a rock in my life. We met the second day of second grade and have been inseparable ever since. Even now, despite living in separate states and having two extremely different lifestyles, we are still so close and know that, should we ever need anything, the other will be there. For as long as I can remember, she's always been the one to make me laugh, annoy me, and just keep me company when I needed it the most. But there was a time when we faced the very real possibility that she would no longer be with us.

The fact that she got through it will never cease to amaze me. She's a freaking warrior, and I try to remind her of that every chance I get.

At the start of high school, she signed up for track and field. She was so excited to be part of the team and get started with practice, but she noticed a quick decline in her energy and soon developed difficulty breathing. We thought it might have been asthma or her body not being used to consistent activity, but when she went to the doctor, the horror smacked her (and, as a result, me) right in the face. She had a hole in her heart and was told that if she had run an entire lap around the school, she might have died.

This news was difficult to digest, especially considering how young we were at the time. We had barely started our teenage years, and she was suddenly told she would have to undergo extensive open-heart surgery.

The morning of her surgery, I was home. I wanted so badly to be there, but the hospital insisted only her immediate family wait for her there. She had been scheduled for an extremely early operation, and the exact minute she was scheduled to go in, I woke up, like some sort of instinctual internal clock. A feeling of dread settled into the pit of my stomach, and while I'm not exactly the religious type, I started praying that my best friend would not be taken away from me.

Later that day, after the operation was finished and she was in recovery, I went to the hospital to see her. She didn't even look like herself. All of the color in her features had gone, leaving her incredibly pale. She tried so hard to be present and engaging, but she was so weak and just needed to rest. She was like that for weeks. School didn't feel the same without her, but I visited her as much as I could, brought her schoolwork to her, and bought her dumb gifts to make her smile. I wanted to keep her up to date on everything and feeling like herself as much as possible, so no detail was too small.

I won't say that period of time wasn't hard on me, but it was nothing compared to what she went through. And the fact that she got through it will never cease to amaze me. She's a freaking warrior, and I try to remind her of that every chance I get. Seeing her get better, smile, and laugh was worth every moment I spent worrying about her. And I know she felt guilty leaning so much on others, but she always tried to show her love and appreciation. I just felt (and still feel) so lucky to still have her by my side, because I was so close to not having her at all.

To this day, thinking about that period of our lives is difficult, but it reminds me just how strong and resilient we can be. Situations like that aren't easy for the person going through it and for the people helping them through it, but it reminds me to be thankful for every day I have with the people I love. And I'm so thankful for my strong friend.