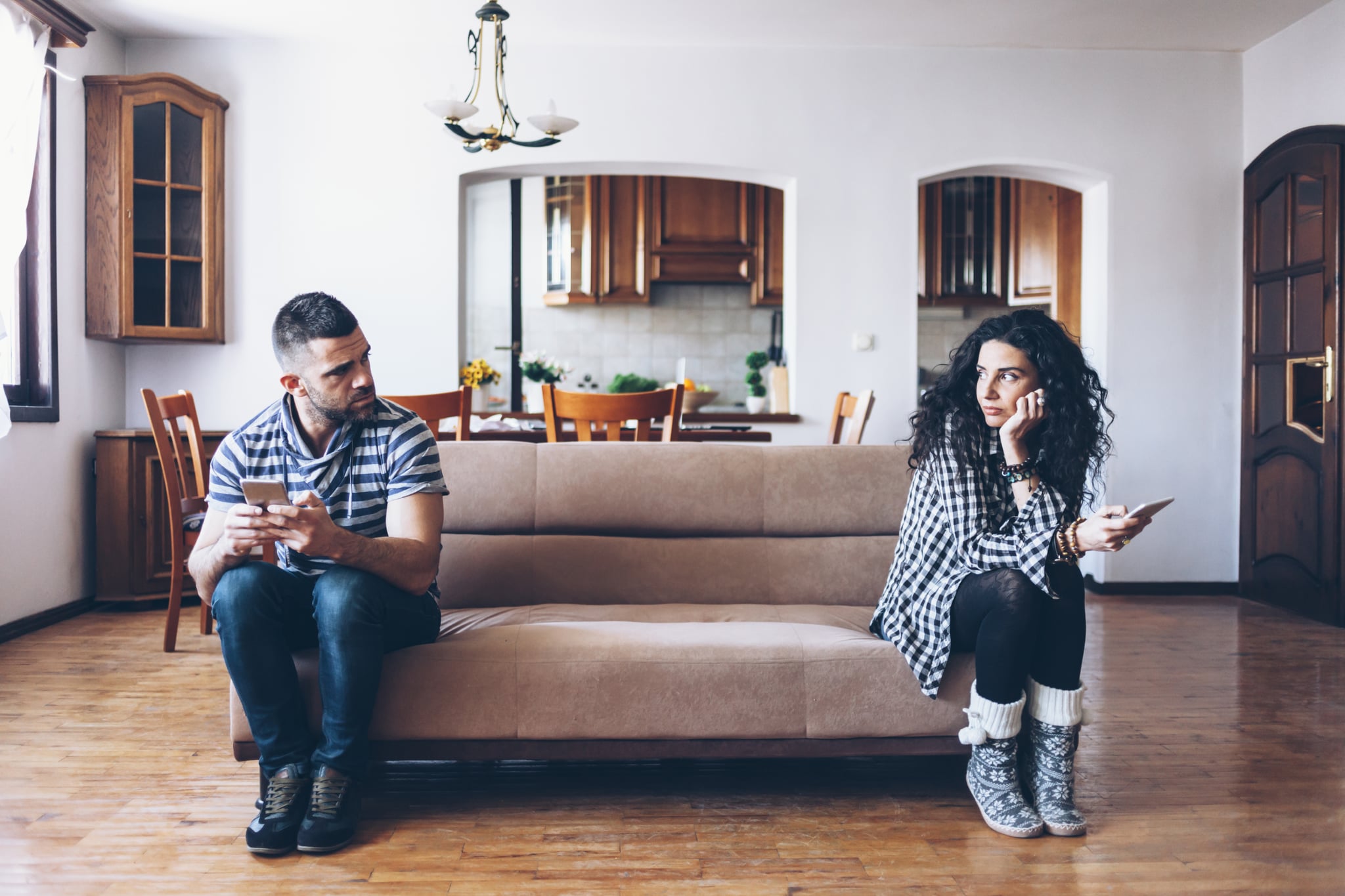 Since the dawn of the modern text message, we have been using texts to flirt with a new crush, tell loved ones we got home OK — and, also, to send passive-aggressive thumbs-up emojis. But now, some couples are advocating for fighting via text — aka "fexting," according to The New York Times.

Simply put, fexting is a text-message fight. But it's so much more than that. It's a ballet of emotions, except your fingers are doing all the dancing. And it's not just for long-term relationships: it also works when a second date cancels last minute. It's also good for sending the literal "last word" in a situationship that's run its course. Fexting doesn't discriminate. As long as you have a phone and feel wronged, you are capable of fexting. But is it healthy for your relationships? That's up for debate.

"Many people use texting to communicate more intense emotions because they don't want to hurt their partner's feelings or they don't want their partner to hear the emotion in their voice when they talk about something difficult," Akos Antwi, APRN, PMHNP, psychiatric mental health nurse practitioner, tells POPSUGAR. "Texting can be a useful tool, but couples should lay down some ground rules before they start."

Like with any confrontation, licensed couples' counselor Leslyn Kantner says you should avoid personal attacks and instead focus on facts and feelings. Also, keep the messages between the two of you. "There's a tendency during 'fexting' to share the fight with outsiders, which is generally a no-no," she says. "Plenty of times I've witnessed a group of people collaborating on a text response, and it can escalate negative energy without much effort. It's nice to feel validated, but the 'fight' needs to be refocused on the people involved." Also, be sure to allow time for the other person to respond. If the requirement is for an immediate reaction, you'll likely get emotional instead of giving thought-out contributions.

Considering texting for your next fight? POPSUGAR spoke to couples' counselors about the pros and cons of fexting, what boundaries should you set before engaging in a battle of the fexts, and alternative fighting styles if confrontation is not your thing.

Fexting is a fight that happens over text messages. Sometimes it's spontaneous, like a backlash from misunderstood punctuation. But some couples use fexting intentionally. "Fexting is the new way for couples to communicate their feelings," Antwi says. When couples are face to face, they can easily get caught up in an argument and lash out at one another. Sometimes this confrontation leads to harsh words that can be difficult to take back or forgive. "Fexting gives couples a chance to process their emotions without being too vulnerable in front of each other — or so they think!"

Antwi has worked with several married couples who use text-message fighting as a way to hash out their problems before they come face to face on an issue. "The arrival of mobile phones has made it easier than ever for couples to communicate with each other, but it's also opened up a whole new set of issues," she says. While it's possible to use texting as part of a healthy relationship, she doesn't recommend starting a fight over text. "Talk face to face when possible."

What Are the Benefits of Fexting?

Kantner says she's not a fan of fighting it out via text. "For me, it's the immediacy that can complicate things," she says. "Another complexity about 'fexting' is that the fighting energy is then accessible all day." Unless we put the phone down and walk away from it, we might as well be stuck mentally in the active argument. "It's exhausting and can be hard to walk away from."

But she does say there's a benefit to writing out your feelings. "It takes a bit of thought to craft a written response," Kantner says, suggesting that if you must text it, write or type it out in your Notes app separately, let it marinate to be sure the message conveys your intent, and then copy and paste it to text. Antwi agrees, adding, "Writing out what's on your mind gives you time to think about what it is exactly that bothers or concerns you." Other benefits of fexting include:

What Are Alternative Ways to Address Conflict?

If you're in a relationship that is not ready to incorporate face-to-face confrontation yet, there are ways to communicate other than via text message. Below are some alternative ways for couples to resolve conflict:

Relationships
Is "White Lotus"’s Albie a Nice Guy, or Is He a White Knight Gone Wrong?
by Melanie Whyte 22 hours ago

Family Life
Why Are More Couples Choosing the DINK Lifestyle?
by Devan McGuinness 2 days ago

by Emily Oldenquist 46 minutes ago