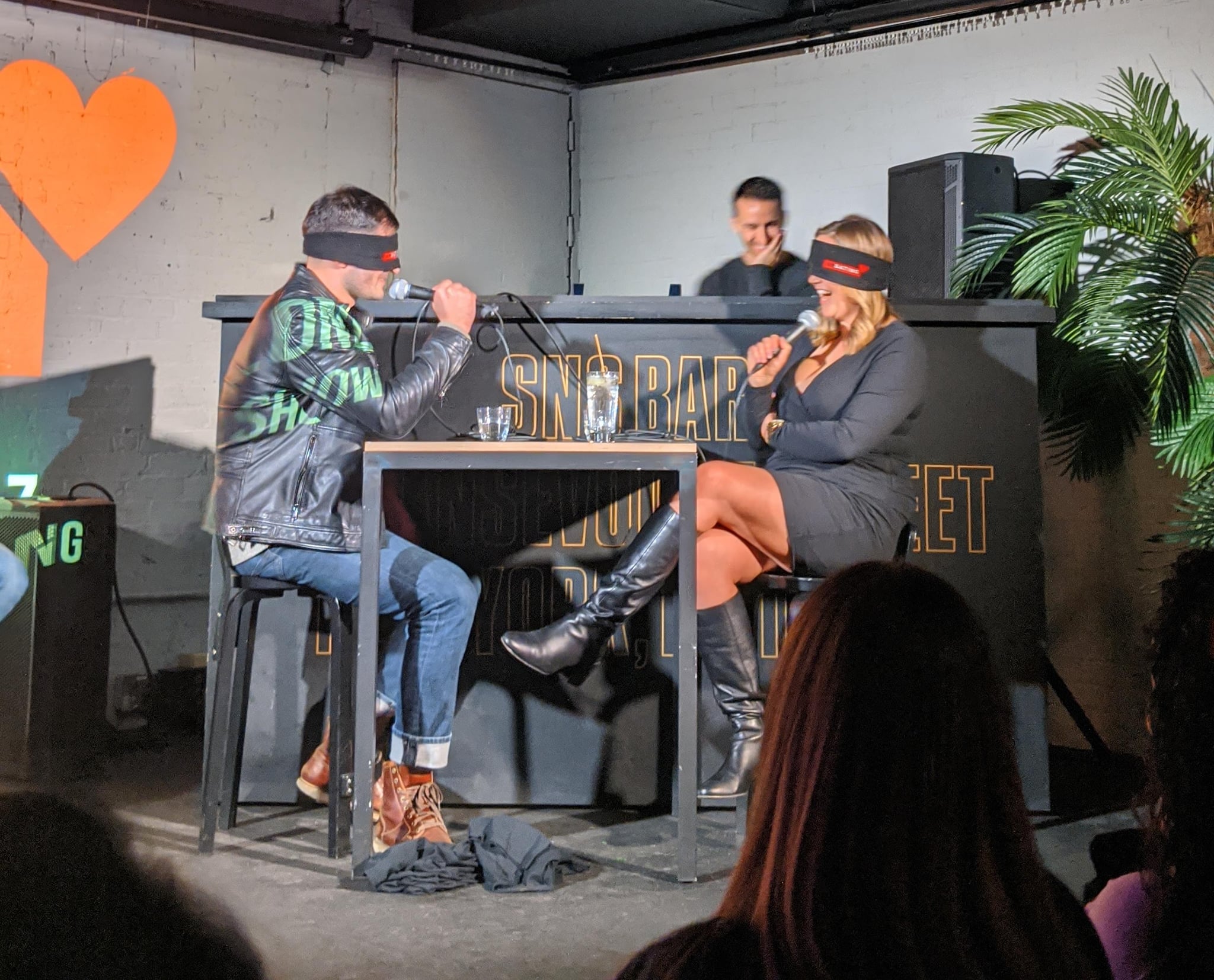 Something I really love about New York is its anything-can-happen energy. There are certain moments when you can't help but feel like the city scoops you up and plops you exactly where you're supposed to be. For me one recent Friday night, that meant being on a first date arranged by a comedian and a dating blogger, on a stage, donning a blindfold — aka UpDating.

UpDating is one part matchmaking, one part improv, and one part game show. And not only is it entertaining as hell, but it actually has a decent track record for successful romantic matches. The concept, dreamed up by cocreators and hosts Brandon Berman (comedian) and Harrison Forman (blogger), is that everyone likes eavesdropping on a first date, so whether it's a total train wreck or a cute rom-com, the audience will still have fun. As for the contestants, hundreds of singles apply each week to take the stage for the blindest of blind dates, which could be taken over at any moment by someone in the crowd. Is this what dating has come to? A Lord of the Flies-style showdown for love? Sign me up!

After a rigorous application and interview process, I received an acceptance call that gave me a rush of excitement I hadn't felt in ages. I realized what compelled me to do this in the first place was that the paradox of choice inherent in dating apps had me bored with my romantic life. I was addicted to the zing of a first date, and now, I sought out something stronger. Well, the adrenaline rush coming my way was about to hit this junkie like a truck.

The night began with an onstage solo interview, as Brandon chatted with me about my aspirations for a romantic partner. We riffed about how low the bar gets sometimes, and I lamented that I just want someone who cares enough about the environment to recycle. The crowd loved it because they felt this way, too. As my rapport built with them, so did my excitement.

While they interviewed my date, I sat in a storage closet (LOL) where the building adrenaline could course its way through my body in what felt like a generously sized standing coffin. After a few minutes that felt like 10 years, it was time to don my blindfold and take the stage. And . . . wow. Turns out the zing I had experienced before was just an appetizer. As I touched the hand of my mystery man, I felt about 20 kilos deep in the crazy first-date energy swirling around the bar. Then it was as if the entire meatpacking district of New York City was at high voltage when, from across the table, a voice like smooth ganache said, "Hello."

Rattled as I may have been from the buildup, I gathered myself together enough to kick a hello back and learn my date's name: Charles. From there, a dramatic pause nearly lost our audience before he hit me with, "So . . . do you have any burning questions?" If this sounds like it was off to a slow start, well, we weren't exactly in a race to see who could make the biggest fool out of themselves, so it was a bit of a game of chicken at the onset. Luckily, my amateur comedy session at the top of the show prepared me for such a moment. I inhaled slowly and then trotted out the flirtatious question every woke person is hoping to get: "Do you recycle?"

The audience, bless 'em, roared, and Charles got the opportunity to boast that he recycles because he's from California. I responded with a dash about my San Diego upbringing and off we went, on a normal date with all these lovely strangers hooting and hollering for us in the background. At some point my imagination slotted in the unknown details about Charles. With a voice like clarified butter and a conversational pace like a poet, I pieced together a fictitious handsome stranger and the flirting came naturally. By the time I was two gins and 10 jokes in with a (presumably) totally hot guy, I found I was genuinely enjoying myself. As he attempted to best my witty jokes by peacocking his own talents like singing and playing the piano, I tossed around my blowout and thought, we're crushing this.

After a brief intermission, it was time to take the blindfolds off, but not before the cohosts interviewed us individually about how it was going. Who knows what Charles said about me, but once he and his delicious singing voice were whisked away, I donned a cloak of brutal honesty and got right to it with the crowd who was now collectively my bestie. Throwing one leg over the other, I confided, "OK, he seems into it, but what was with that opener?" Everyone was with me on that; they thought he could have been more engaged, but his voice had us all swooning, so together we decided there was reason enough to meet him sans blindfold. Brandon and Harrison made a real moment of the big reveal, and while I discovered my fictitious Charles looked nothing like the real one, the good news is they're both gorgeous. The real Charles has smoldering eyes, dark hair, and the facial structure of a Kennedy — so I was on board.

What happened next was one of the most vulnerable moments of my adult life. They asked the audience if anyone wanted to take over this date, and a darling woman about a decade my junior jumped at the chance and made her way to the stage. She arrived at my elbow, grabbed the mic, looked into Charles's eyes, and offered, "I think you have a really great voice and you're pretty handsome, too. I guess I'm here because if Lisa doesn't want this date, I'll gladly take it over."

You'd think this might be a waking nightmare, but it was strangely quite the opposite. I can't imagine the gumption it took to do or say any of that, and so instead of fearing her, the rest of the onlookers and I shared a moment of pure admiration for her. Plus, I'd already had the night of my life, so if this is where it was going to conclude, so be it. I turned to our host Brandon to say, "Should I get up?" and am relieved to tell you that Charles ever so subtly communicated that no, I should not, and the brave little hijacker took her seat. Charles and I then wrapped up our date in an ostensible you-may-kiss-the-bride moment I just couldn't pass up.

He texted me later that weekend, and we're making plans to go out again. Regardless of what happens, I had a ball, and the wins were not limited to just a successful date. By breaking away every protective layer, UpDating cocreators Brandon and Harrison offer audiences so much more than eavesdropping. They let everyone experience the emotional roller coaster of first dates in a delicate, intimate way that captures the romantic dance. As this duo continue to bring humility and humanity back into the dating process, I can assure you I'll be in the front row of as many shows as possible, cheering on those brave romantic hopefuls, and if you find yourself in New York, I encourage you to join me.

Image Source: The UpDating Show
DatingPersonal Essay
Around The Web

Healthy Living
I Tried Intermittent Fasting to Lose Weight, but I Didn't Expect to Break Free From Sugar
by Elisa Cinelli 7 hours ago

Family Life
In My House, Every Night Is Date Night, and It's Easier to Do Than You'd Think
by Stephanie Henderson Snyder 7 hours ago

Fashion Week
I Shopped My Own Closet For Fashion Week and Honestly, I Feel Like I've Never Looked Better
by Nikita Ramsinghani 2 days ago