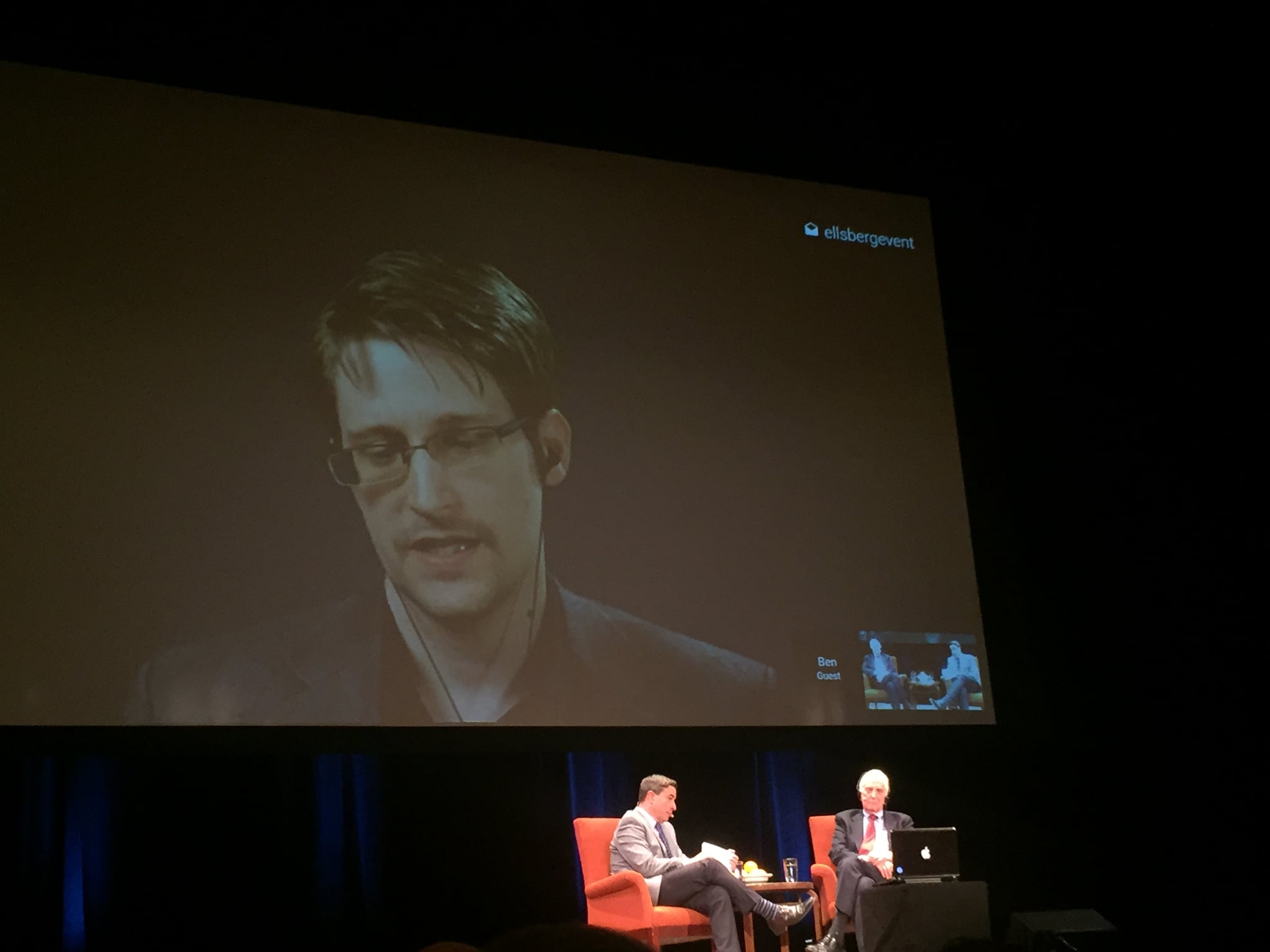 Regardless of your opinion on Edward Snowden, his ability to access a fair and free trial should concern every American. On Feb. 26, whistle-blower-turned-activist Daniel Ellsberg, Snowden, and KQED host Scott Shaffer came together for a conversation in San Francisco. Their discussion revealed some surprising truths about national security, including what exactly Snowden means when he says he won't get a fair trial if he returns to the United States.

Snowden, who leaked evidence that the National Security Agency had implemented a widespread mass surveillance program while he was working as a private contractor for the government in 2013, has long requested a fair trial. While many consider his actions treasonous, Snowden maintains that he released the trove of information to journalists at The Guardian because the government's program was illegally targeting citizens.

Snowden has also fielded criticism about his reluctance to return to the United States from Russia, where he is currently living under asylum, to face charges against him. Those charges include the unauthorized communication of national defense information and the willful communication of classified intelligence information to an unauthorized person. Snowden says that until he receives assurance from the United States government that he will receive a fair trial, he won't return — and he has evidence he claims proves why he wouldn't.

Ellsberg's case is the first to demonstrate Snowden's point, as does Chelsea Manning's. In 1971, while working as an analyst for the RAND Corporation advising then-President Nixon on Vietnam War strategy, Ellsberg leaked the Pentagon Papers to The New York Times and The Washington Post. The documents revealed that the American government under President John F. Kennedy and especially under President Lyndon B. Johnson had repeatedly lied to Congress and the public about expanding operations in Vietnam and the war's stalemate, which was costing lives.

"Legality is not a substitute for morality."

After the now-named Pentagon Papers were published, Ellsberg was charged under the Espionage Act of 1917 for receiving national defense documents, communicating national defense documents, and retaining national defense documents. While his case was eventually thrown out because Nixon had authorized the infamous "plumbers" to illegally gather evidence on Ellsberg, his trial revealed the discomforting tenants of the seemingly antiquated law. Ellsberg was the first American to be charged under the Espionage Act, and his case set the precedent for future presidents to charge would-be whistle-blowers. It placed leaking documents or information, no matter how justified, on the same level as selling state secrets to another country.

During the trial, Ellsberg's lawyer asked him why he had leaked the documents to the press in an attempt to allow his client to explain that he wanted to prevent unnecessary loss of life in a seemingly unwinnable war. But the government prosecutor immediately objected to the question, citing it as irrelevant to the case. The judge did not permit Ellsberg to answer why he did what he did. The judge said it did not pertain to the charges according to the law, which describes the action of any type of leak as intended to cause injury to the state and leaves no room for the defense to suggest other intentions. Ellsberg also recounted this experience in an article for The Guardian, which argued Snowden's chances of a fair trial are slim.

Chelsea Manning's case presented the same challenges — or, depending on who you ask, flaws — with the law. Manning is one of the seven people who the Obama administration brought Espionage Act charges against after she leaked a trove of documents on the Afghanistan War to Wikileaks. Like Ellsberg, Manning was prevented from explaining her purpose for leaking the papers during her trial. "The military judge in that case did not let Manning or her lawyer argue her intent, the lack of damage to the US, overclassification of the cables or the benefits of the leaks until she was already found guilty," Ellsberg wrote in 2014.

Despite the fact that Ellberg's and Manning's leaks did not cause any deaths — Ellsberg's arugably saved lives — their purpose for revealing such information is legally considered immaterial; a crucial puzzle piece of their cases (and future cases) was not heard by a jury. While this is technically permissible as dictated by the law, it does not seem fair, which is why Snowden is so adamant about ensuring he will receive a fair trial. In fact, Snowden said that his request for a fair trial from American officials was repeatedly denied — the only promise they can make is that he won't be tortured if he turns himself in. Snowden laughed as he shared the government's offer with the audience.

Both Snowden and Ellsberg insisted that the Espionage Act must be reformed to protect whistle-blowers. So long as the 1917 act remains written to preserve the government's interests, whistle-blowers will have no choice but to break the law and circumvent avenues for legally calling attention to government wrongdoing. Those paths are demonstrably ineffective and do not protect anonymity.

It's worth pointing out that Snowden is also insistent that he is not a hero; he maintains that there are no heroes, only heroic actions. "Whistle-blowers are elected by circumstance," Snowden said of his decision to leak classified documents. Snowden also reiterated during the talk that he does not regret his actions. "Legality is not a substitute for morality," Snowden told the audience. Indeed, just because something is legal does not mean it's right.