At POPSUGAR, we made no secret about our support for Hillary Clinton, so when my colleagues and I entered the Javits Center press room on Tuesday night, we did so wearing Hillary t-shirts. Immediately, we noticed that most journalists at Clinton's post-election event in New York had taken a nonpartisan approach, in both wardrobe and demeanor. Halfway through the night, as the results started to turn against us, I realized how exhausting it is to both cover an election and care deeply about the results.

While my friends watched the news together or surrounded by family, I watched in a room filled with strangers. Three of my fellow editors staked out spots on the event floor, with Hillary supporters and staff, but I stayed down below in the massive press pit, where I plotted Facebook Live coverage with our three-woman video team. In a room easily the size of a football field, hundreds of journalists from around the world sat elbow to elbow at cramped tables, surrounded by laptops, chargers, cameras, and dinners on paper plates. Like the rest of America, we watched the results unfold on TV, giant ones scattered throughout our makeshift office. The environment was exhilarating, exciting, and then devastating. But it was where I belonged, and I am grateful that I spent the historic night surrounded by strangers, with no choice but to move forward. 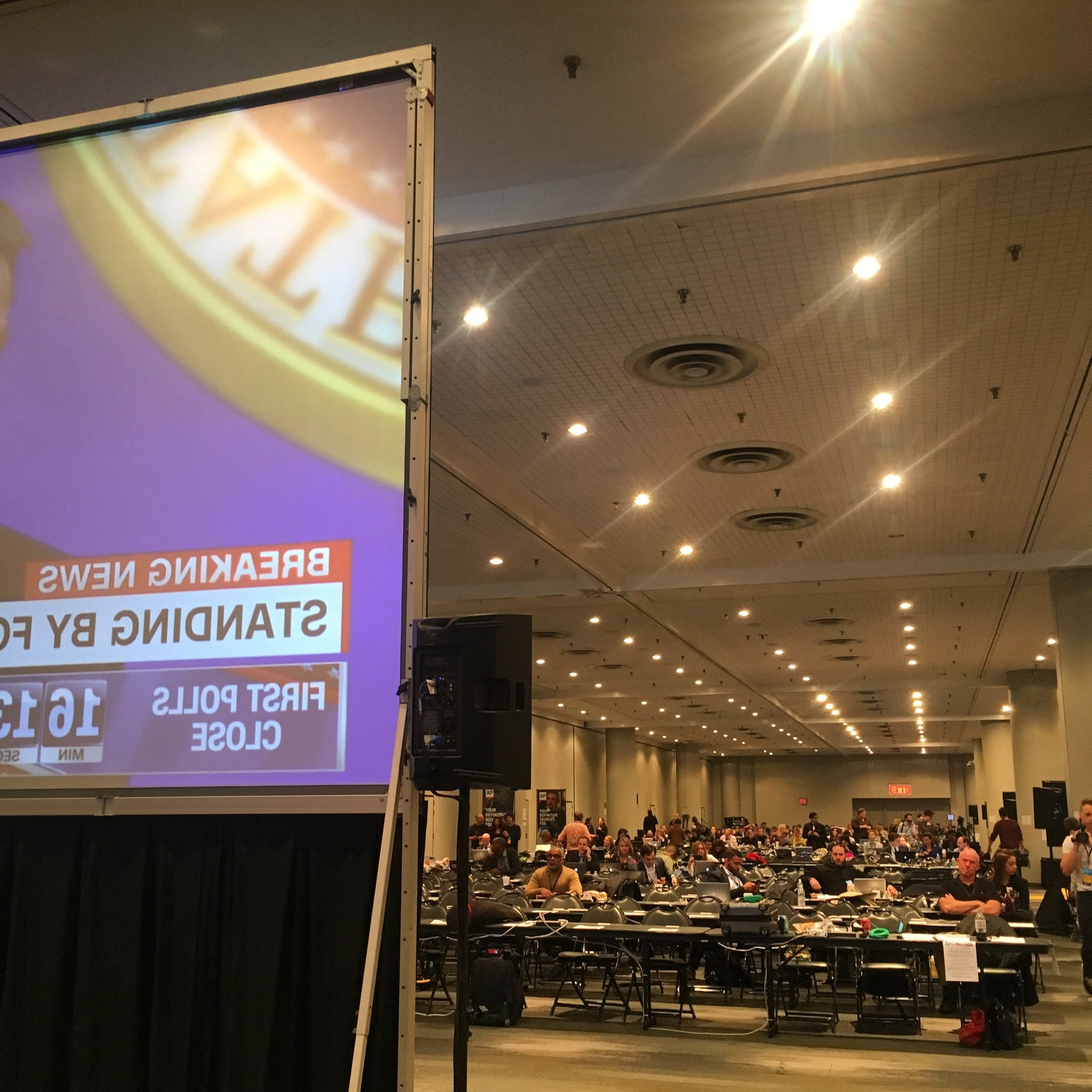 Like many Hillary supporters, I began the night cautiously optimistic. We bought "Love Trumps Hate" buttons from a vendor on the street and excitedly Instagrammed our media badges and fed off the energy of our surroundings. In the early-result doldrums, we sketched out talking points that addressed the historic nature of the evening without making any assumptions, while in my head, I acknowledged my doubts and fears and refused to accept a Clinton victory as a foregone conclusion.

But then I started speaking to Hillary supporters — a mother and her wise 13-year-old daughter, an inspiring young female comedian of color, and an optimistic 21-year-old campaign intern — and I began to lose my grip on skepticism. The people I interviewed seemed so optimistic, I felt wrong bringing up the possibility that our side might lose. Then, the bad news started rolling in, the on-camera guests became harder to wrangle, and I wondered how concerned I should be.

As the night went on, I thought back to the other elections I've covered as a journalist, starting with the contested election of 2000. I remembered the excitement in the newsroom, how insane it felt to go to sleep not knowing who our next president would be — and to still not know for 36 more days. Even compared to that, last night at the Javits Center felt exponentially more intense, and the stakes infinitely higher. I have always watched election results with interest, but also acceptance; if my candidate didn't win, I was disappointed, but I could get on with my life. But never before have I felt so incapable of finding common ground with another party's candidate. Never before have I been so utterly shocked on election night — not even in 2000 — nor have I ever worried that the outcome could be dangerous.

Around the time Florida was called for Donald Trump, I started receiving a flurry of text messages from friends and family, expressing dismay, wondering how I was doing, asking how weird it felt to be there at the Javits Center. Suddenly, I was extremely grateful to be in that press room, where all night, even when cheers erupted from the crowd upstairs, it remained oddly calm and quiet. I found it hard to engage with the emotional texts on my phone while I still had work to do, a sentiment clearly shared by the pragmatic reporters surrounding me.

That's not to say I was numb to my emotions, because I had plenty, but last night, I mostly had to process them on my own. Rather than be surrounded by a group of like-minded friends, I was in the midst of like-minded strangers, and I felt privileged to be alongside them. Being in a room full of journalists, who had no choice but to accept the election results and move on, helped me do the same. I was reminded that as a member of the press, I have a job to do, and that free speech is an essential part of our democracy. While I can't control the election results, I also can't dwell on them, because this is bigger than me.

Digital Life
I Started Putting My Phone in a Different Room at Night, and It Really Improved My Mental Health
by Caitlin Gallagher 12 hours ago