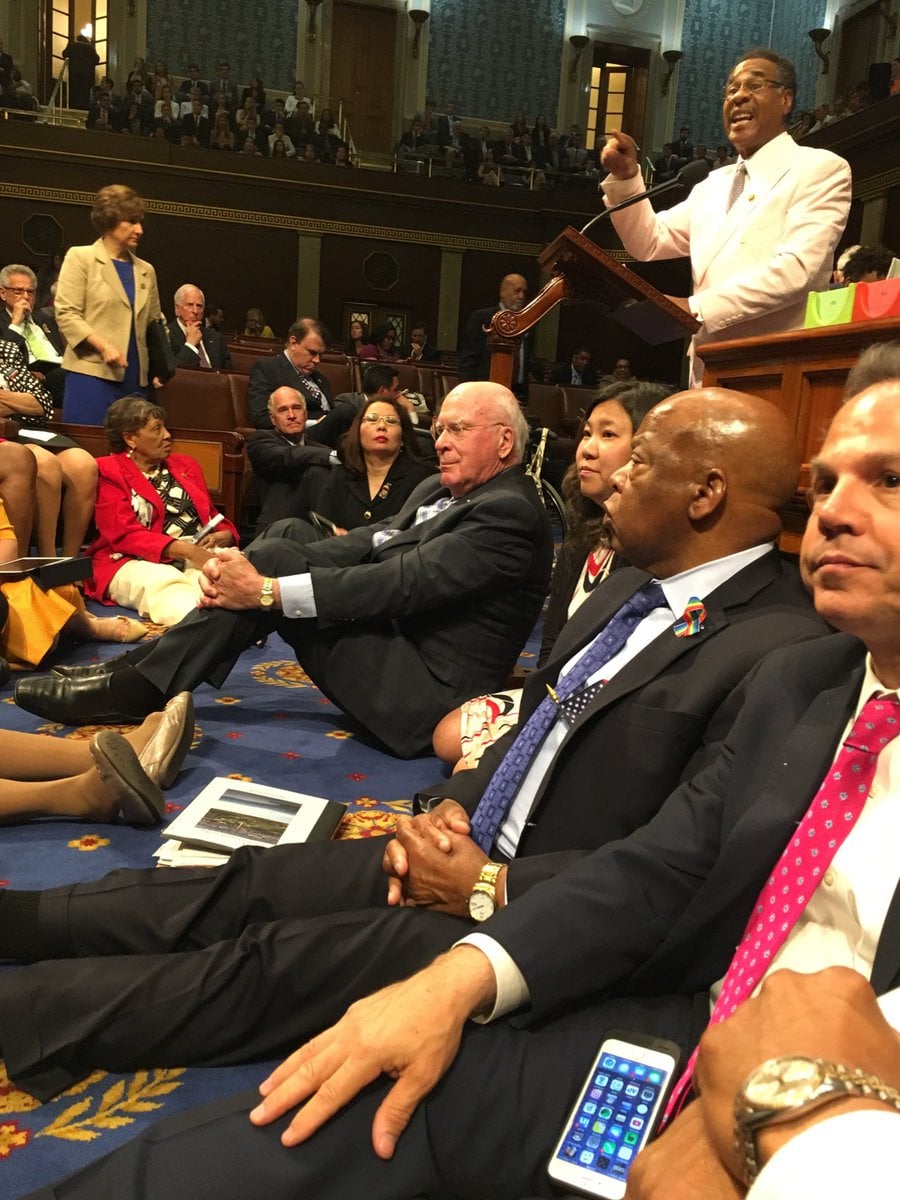 Update: After the congressional GOP opted to adjourn for a recess until July 5 rather than vote, the House Democrats chose to end their sit-in protest on Thursday. According to Rep. John Lewis, the participating representatives will come back "more determined than ever before."

We got in trouble. We got in the way. Good trouble. Necessary Trouble. By sitting-in, we were really standing up. #NoBillNoBreak

We must never ever give up or give in. We must keep the faith. We must come back here on July 5 more determined than ever before.

The act of civil disobedience began Wednesday morning, and the representatives have no intention of moving until House Speaker Paul Ryan calls for a vote on measures that would tighten gun control in the United States. They have received words of support from President Barack Obama, and the #NoBillNoBreak Twitter hashtag has over 200K tweets at the time of writing.

Thank you John Lewis for leading on gun violence where we need it most. https://t.co/vctfqAH5Wt

While there are no cameras running inside Congress, participating representatives have been tweeting live from the floor. Check out their updates below, then follow along with the protest on Twitter.

My colleagues & I have had enough. We are sitting-in on the House Floor until we get a vote to address gun violence. https://t.co/rTqrPifuUz

From Newtown to Charleston... how long will it take for Congress to act? #NOMORESILENCE #goodtrouble pic.twitter.com/uH4G5HCQc5

Joining w/ @repjohnlewis &dozens of my colleagues for House sit-in for a vote to prevent gun violence #NoBillNoBreak pic.twitter.com/Lg4cM9Gzj0

John Lewis knows a thing or two about sit-ins. We will not give up the House Floor until we get a vote. #GoodTrouble pic.twitter.com/X269SIhyRp

The @HouseGOP may run from a vote for common-sense gun measures, but they can’t hide. #NoBillNoBreak pic.twitter.com/TMnjPmJClS

.@SenatorReid is on the floor. @HouseGOP can you hear us yet? We demand a vote to stop this carnage. #NoBillNoBreak pic.twitter.com/sV8zhYhBjC

Reggina was just 16 when she was killed leaving a vigil in Oakland. I’m staying on floor for her. #NoBillNoBreak pic.twitter.com/PSJu2L2SKF

Joe Biden
Take a Tour of Biden's Transformed Oval Office, and Learn More About Its Symbolic Decor
by Kelsey Garcia 16 hours ago