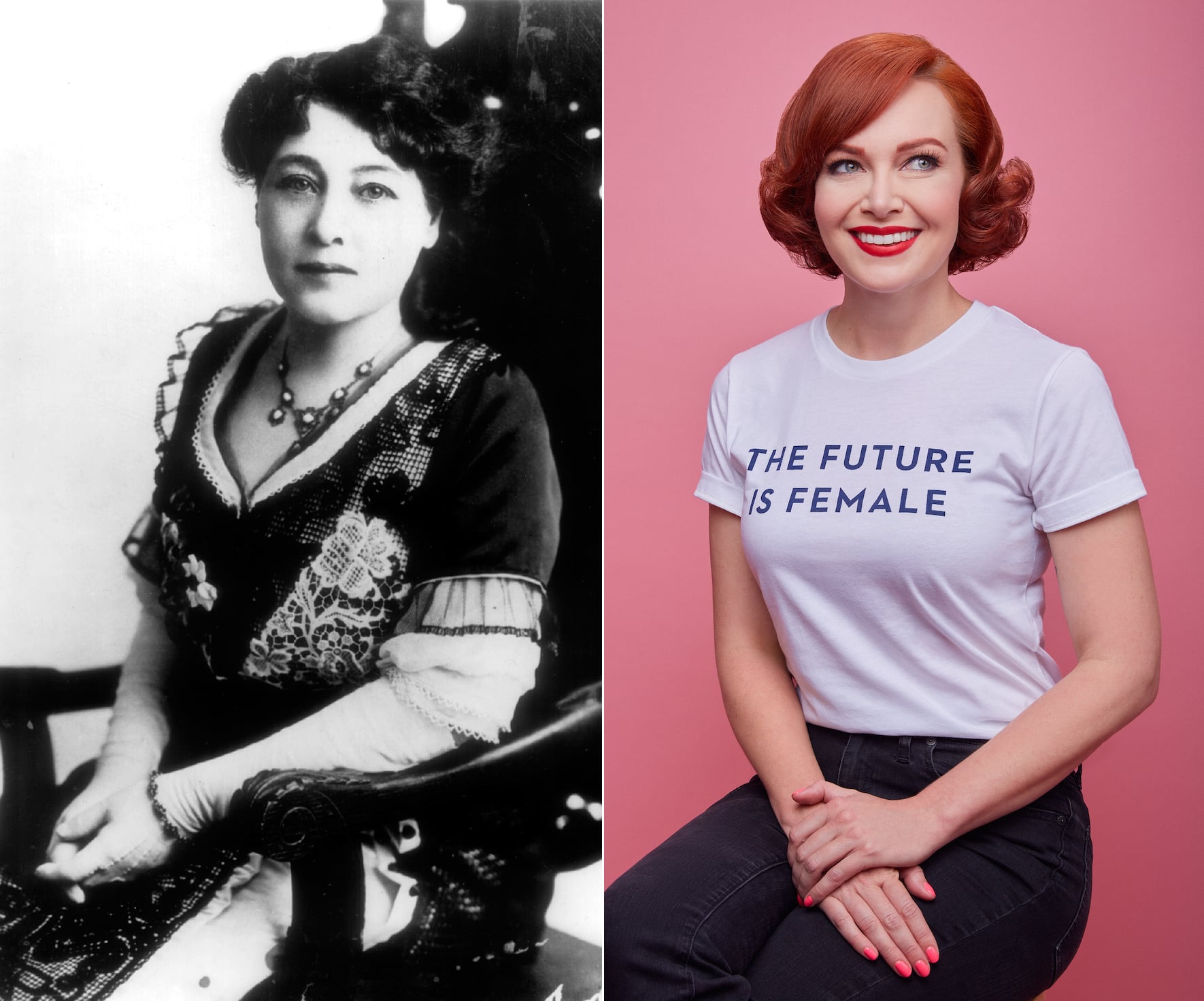 Alice Guy Blaché, on the left, and Alicia Malone, on the right

As a Fandango correspondent and film expert who has lent her expertise to NPR, CNN, and TODAY, Alicia Malone knows a thing or two about movies. Now, she's bringing her passion and knowledge to bear with her first book, which looks back on some truly incredible women who have made waves in the movie industry. In Backwards and in Heels: The Past, Present And Future Of Women Working In Film, Malone digs into the true stories of women who forever left their marks on the silver screen. In this exclusive excerpt, she shines a spotlight on Alice Guy Blaché, whose legacy as the first woman director was nearly lost forever. Read it below, and catch Malone at Comic-Con on the "Female Voices of Film" panel on July 21.

One of the first directors in cinema history was a woman. Her name was Alice Guy Blaché, and her story was lost for many years, because it was erased by the man who hired her.

Alice was born in Paris in 1873; 20 years later, she applied to be a secretary for Léon Gaumont, an inventor and the owner of a photography business. One day, Léon and Alice attended an exhibition put on by the Lumiére Brothers. They were showing off their latest invention, a camera which could record motion pictures. Léon purchased one, and Alice, inspired by the footage she watched, asked if she could borrow it.

With this camera, Alice made a short movie called The Cabbage Fairy. This was 1896. As you may guess from the title, this was a simple scene of a fairy pulling babies out of cabbages. It was created to show Léon's customers what a motion picture camera could do, but now stands as one of the very first movies in history which featured a story. Alice didn't think it was a masterpiece, but said, "the film had enough success that I was allowed to try again."

Around this time the first movie production companies were being set up, and Léon decided to create his own — the Gaumont Film Company. Alice was put in charge of making the films, and she proceeded to direct every single movie out of the company for the next 11 years.

Slowly, Alice's productions became more elaborate, and new technicians were hired to help her out. Alice had gone from being a secretary to a powerful figure at the fledgling studios, and she had to learn how to take charge.

On one of Alice's movies, a camera operator fell ill, and an English man by the name of Herbert Blaché-Bolton was sent in his place. He was new to the equipment and found his director to be cold and distant. "No doubt he was right," Alice said later, "still young, in a job where I had to give proof of authority, I avoided all familiarity."

Over the course of working together, however, Alice began to trust Herbert, and they fell in love. Unfortunately, their first film wasn't as successful. When the print was developed, it was found to be overexposed, scratched, and unusable. Alice cited faulty camera equipment — which could be true, cameras were not very reliable in those days — but I prefer the romantic version that she was trying to save any blame from falling on Herbert. Not long after, the two were married, and three days later they set sail for a new life in the United States.

For a few years, Herbert and Alice ran the new Gaumont Film Company in New York. But Alice wanted her own production company, so in 1910, she built Solax Studios in New Jersey. This made Alice the first woman to ever start her own motion picture studio.

At Solax, she oversaw the production of more than 300 films, everything from comedies to dramas and westerns. She directed about 50 of those films and continuously experimented with new filmmaking techniques, such as in her movie Beasts of the Jungle, where she used a split-screen effect to make it appear as if a lion were on the other side of a family's front door. Really it was two recordings side by side, one of the house and the other of a lion at the zoo.

Alice also coached her performers towards a realistic acting style, with the words "Be Natural" emblazoned on a large banner inside her studio. This was unusual for the time, because in silent film, actors were taught to "pose," using over-the-top gestures to indicate their emotions. But if you look at the acting on one of Alice's films, such as Falling Leaves, about a child suffering from tuberculosis, it's toned down and realistic.

In the end, Alice had a sad conclusion to her career. Solax couldn't compete with the major Hollywood studios, so she had to shut it down. Her marriage to Herbert also didn't survive, so Alice moved back to France in 1922.

Five years later, she returned to the U.S. to get copies of her films, hoping she could use them to find work as a director in Paris. But out of her 1,000-plus movies, Alice couldn't find a single print.

This was very common during the silent era. Nobody thought movies would become a cultural phenomenon or that the preservation of film history would be important. It's estimated that 90 percent of all silent films made in America have been lost. Negatives were destroyed after they played in the theater, and if they were nitrate prints, storage was often hazardous. This type of film stock was highly unstable and had a nasty habit of combusting when not maintained in exactly the right conditions. And once nitrate film caught fire, not even water would put out the flames.

So unfortunately for Alice and many other silent filmmakers, most of her work disappeared, and today only around 130 of her movies remain.

Now broke, Alice had to lean on her children for financial help. In 1930, to make matters worse, Léon Gaumont published a history of the Gaumont Film Company, which didn't mention anything before 1907. He omitted all of Alice Guy Blaché's work as a director. Consequently, nobody knew for a long time how significant a role she played in setting up his very successful studios and in the birth of film itself.

Ten years before Alice passed away, the French Government discovered her accomplishments and gave Alice the 'Legion of Honor' in 1953. A year later, Léon Gaumont's son Louis admitted in a public speech, "Madame Alice Guy Blaché, the first woman filmmaker . . .has been unjustly forgotten," and film historians started to take notice.

In 2011, Martin Scorsese awarded a posthumous Director's Guild of America Award to Alice Guy Blaché. In his speech, Martin called the loss of her history "a tragedy," saying that Alice was "a pioneer in audiovisual story-telling . . . more than a talented business woman, she was a filmmaker of rare sensitivity, with a remarkable poetic eye and an extraordinary feel for locations."

Laverne Cox
Laverne Cox Was Dubbed by a Male Actor in the Italian Promising Young Woman, and It's Not OK
by Kelsie Gibson 10 hours ago