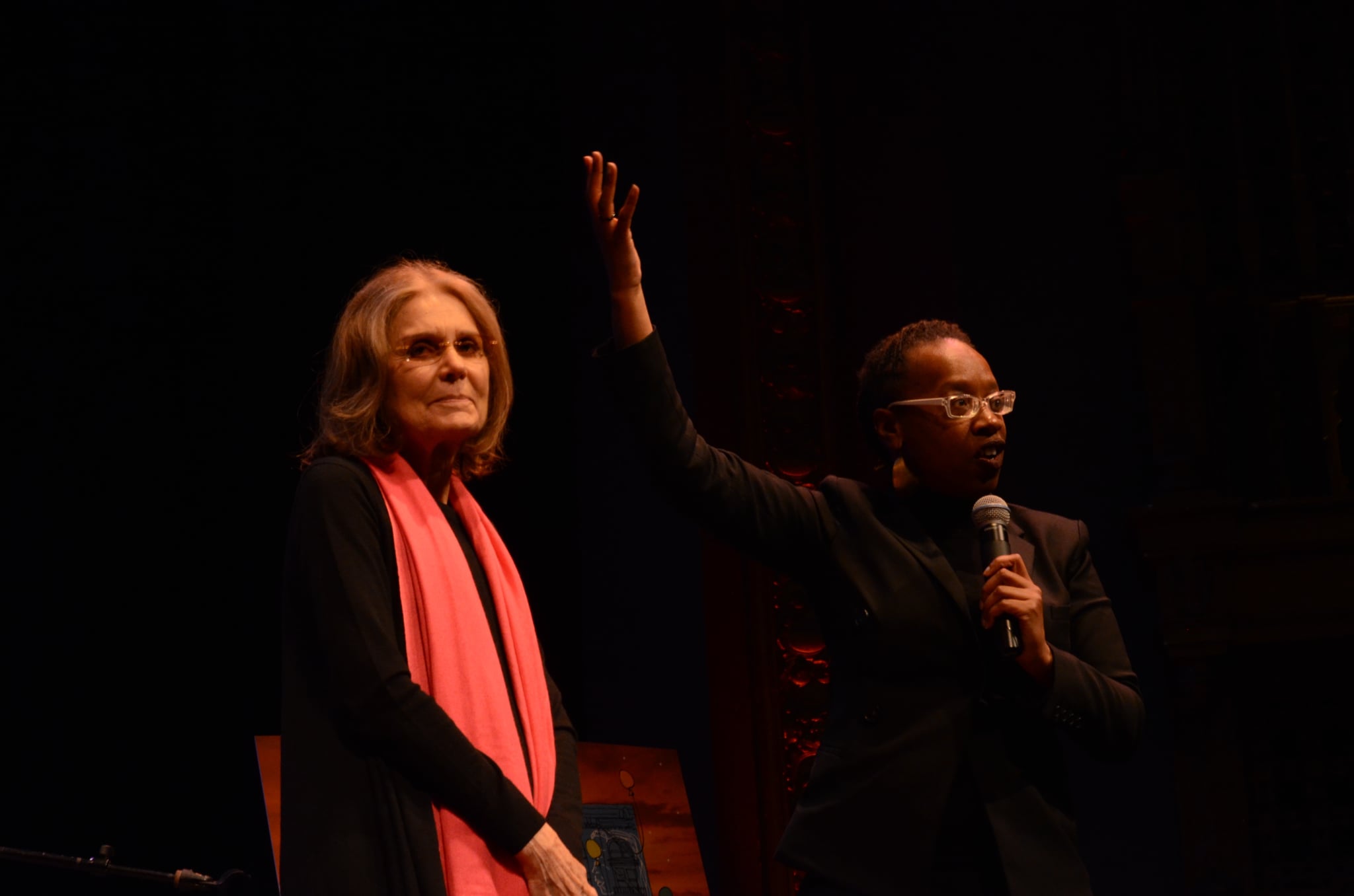 "Don't look up — look at each other." That's how Gloria Steinem responded when asked how to evade anxiety under Donald Trump's administration during a recent talk in San Francisco.

It's easy to forget just how radical Gloria Steinem's beliefs were considered nearly 40 years ago when she first dedicated her life to women's liberation. Now, thankfully many of those ideals (namely equality for all women) have been adopted by the mainstream.

As we enter an era where equal rights for women are potentially threatened, Steinem's ideals are especially relevant. Speaking to an audience hosted by The Women's Building of San Francisco, Steinem spoke with another influential Bay Area activist, Lateefah Simon, about her life as an activist and strategies to subvert Trump's policies.

Teresa Mejia, the Executive Director of The Women's Building summarized the conversation in a statement to POPSUGAR News. "Keeping hope alive at this moment is vital. Gloria Steinem and Lateefah Simon remind us that as women, we are strong and will come out the other side stronger," Mejia said. "You have the ability to make a difference; look beside you and help neighbors, volunteer, put your money where you want to see growth. You have this choice every day and it's your power."

Ahead are some takeaways on remaining hopeful during this administration and how you can take action daily.

1. Recognizing that support for the Women's March is stronger than ever before.

Steinem, who was at the forefront of the fight against the Vietnam War, declared that the activism surrounding the Women's March on Washington was "1,000 times" more than that in the 1970s. Speaking to how widespread the Women's March support was, Steinem quipped that she had calls from people in Nairobi, Kenya, and "more surprisingly, Oklahoma," expressing their encouragement. Steinem also added that friends in Berlin asked her to "please tell them walls do not work."

Historically speaking, the Women's March on Washington and its sister marches were the largest demonstrations since America was founded. If anything, the sheer size of attendance — which was estimated to be well over 3 million people — is hopeful because more people are mobilizing than ever before.

2. We each have different ways we can be effective.

Simon asked Steinem three ways that women can directly incorporate activism into their daily lives. Steinem said that woman have "dollar power, voting power, and ass power." Translation: women can choose to spend their money at small female- or minority-owned businesses, they can chose who to support politically, and they can choose what causes to put their "ass into."

But it's not just about thinking on a grand level, Steinem said. Activism also means looking for the joy and adventure of speaking for not just for your rights, but everyone's rights. "We all have different ways we can be effective," Steinem said.

Most significantly, Steinem called for women to avoid "shoulds" and just "do." Whether that action is running for office or simply defending your neighbor's rights, women must "get up in the morning and do whatever you can." Instead of "should," start using words like "I know, I can, and I will," Steinem said.

3. "People who experience are the experts."

Throughout Steinem and Simon's conversation, both activists reiterated the necessity for intersectionality between race and gender in the fight against restrictive policies. Steinem has always been a fierce advocate for both women's rights and civil rights, and she maintained their relevance. "Fighting for race and sex has always made you smarter," Steinem asserted. "There is no way on earth that you can be a feminist without being antiracist."

Steinem's call for "double jeopardy" (a synonym for intersectionality) echoed her encouragement of women's meetings. Motivating women to host meetings and have conversations about these pressing issues is paramount to solving them.

Most importantly, Steinem reaffirmed that "people who experience are the experts." Steinem's point was that oppressed people — and not the oppressors or the companies that try to study socioeconomic classes — are most capable of combating the issues they encounter daily. When women have an opportunity to express their experiences, like in women's meetings or even at informal gatherings, they often discover ways to challenge the system.

As an anecdote about this point, Steinem described an unexpected path toward preventing sex trafficking in a small Zambian village. While hosting a women's meeting in the village, Steinem discovered that avoiding prostitution in the city required a higher maize crop yield. The villagers expressed that elephants ate all of their crops once they got to a certain level and what they really needed were electric fences to protect the yield.

"If someone asked me how to end sex trafficking, I would not have said an electric fence," Steinem said.