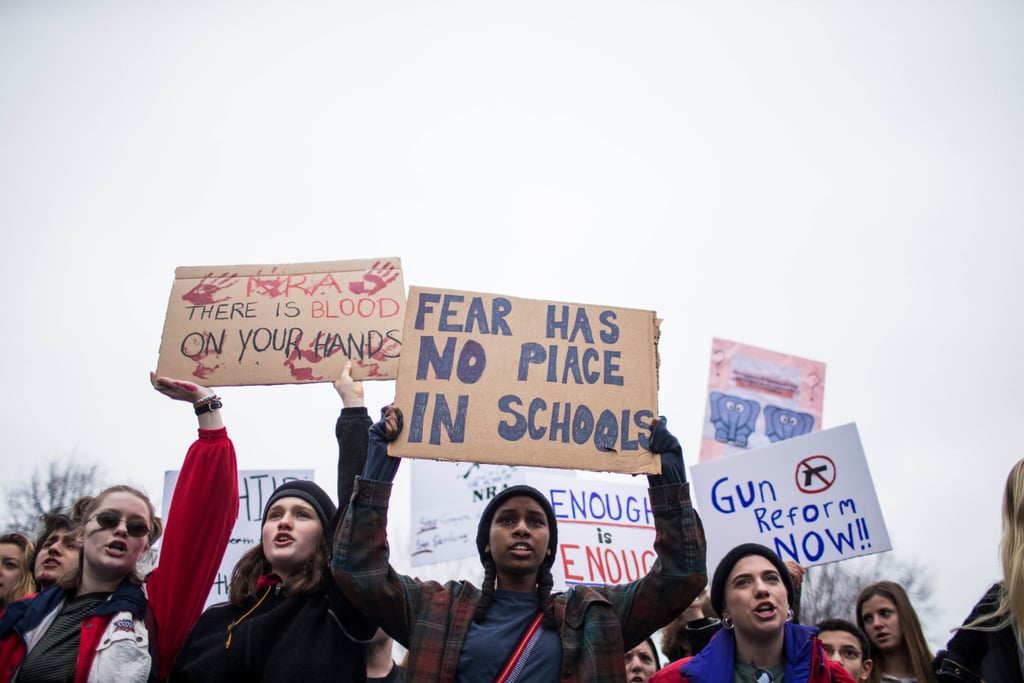 High school students gathered outside of the White House on Feb. 19 for a peaceful protest about gun control five days after the devastating school shooting in Parkland, FL. Dozens of teenagers stood outside in Washington DC and held signs with messages like "Fear has no place in schools" and "Enough is enough." The demonstration was planned by a new organization called Teens For Gun Reform, which formed in the wake of the Parkland shooting.

In addition to gathering by the fence and chanting phrases including "Am I next?" toward the White House, the President's Day event included a short "lie-in," or a few minutes during which the students lay silently on the ground to send a message and symbolize the victims of school shootings.

The Facebook page for the Protest For Gun Reform event reads, "Tomorrow's event centers around a lie-in, where protesters will lie down to symbolize the victims of school shootings; by doing this, we will make a statement on the atrocities which have been committed due to the lack of gun control, and send a powerful message to our government that they must take action now. The lie-in will last for only a few minutes, starting at 12:15, in order to symbolize how quickly someone, such as the Parkland shooter, is able to purchase a gun in America."

Regardless of your opinion on the controversial debate surrounding gun-control legislation in America, you've got to hand it to these young people for speaking up and trying to make a difference when the pain hits close to home. Take a look at some of the most powerful images and videos from the protest ahead.

Related:
How You Can Join a National Walkout For Parents, Students, and Teachers Sick of Gun Violence
Previous Next Start Slideshow
Gun ControlWhite HouseGun SafetyUS News