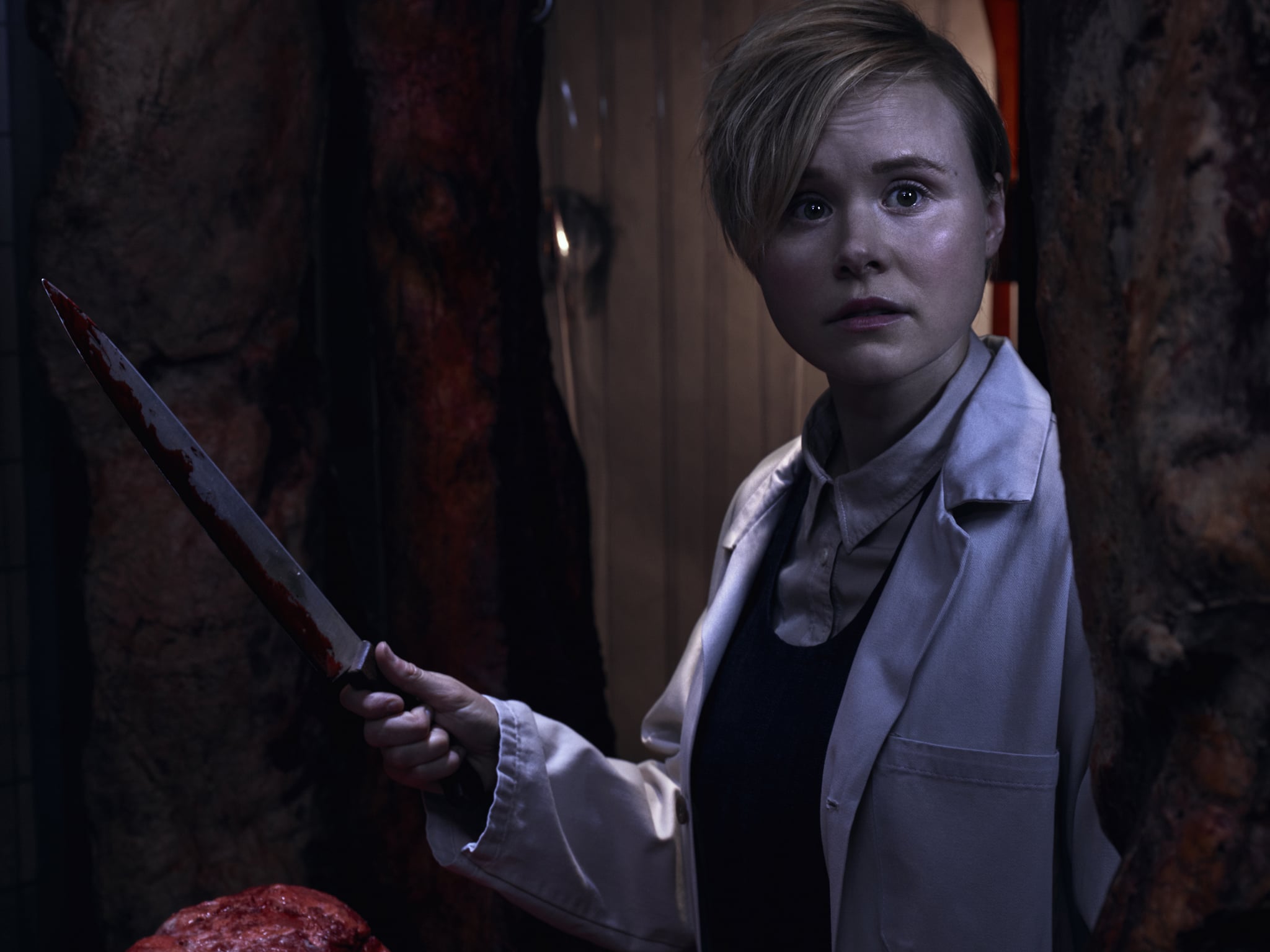 This week, American Horror Story fans finally get to witness the long-awaited seventh season of the show. Considering that creator Ryan Murphy teased the season's 2016 election tie-ins as far back as February, it makes sense for viewers to be hyperaware of any and all political commentary layered between the lines of creepy dialogue and the disturbing confrontations with all those clowns. I've seen not just the premiere, but the first four episodes of Cult. So if you're wondering just how political it gets, let me put it like this: you can't swing a dead cat in the dark AHS: Cult universe without hitting some kind of critique of American politics.

Without giving too much away, Donald Trump and Hillary Clinton do both appear in the season premiere, but not as characters. Instead, we see the real-life politicians through the various TV screens being watched by characters and in compiled footage from the election trail. The season kicks off on election night, and AHS presents what seem to be the most intense reactions to the results from both political parties: the liberal, Ally (Sarah Paulson), screams in agony and horror and immediately crumbles into an emotional mess when Clinton concedes to Trump. On the Republican side, Kai (Evan Peters) screams, "F*CK YOU, WORLD!", then proceeds to thrust his hips into his flatscreen TV while he chants, "USA! USA! USA!" Back in her home, Ally yells, "Go to hell, Huffington Post! F*ck you, Nate Silver!" Kai then proceeds to blend up a bag of orange cheese puffs, smear the mixture on his face, and practice his own Trump impression.

For all the explicit (and sort of unhinged) political commentary, there are also glimmers of a more nuanced — though still easy to spot — critique on the outcome of the 2016 election. Back in July, Murphy revealed that the season would be set in Michigan. This state in particular marked one of Trump's narrowest victories; he beat Clinton by less than 10,000 votes. With slightly more than 50,000 votes going to Jill Stein, it's not hard to see a scenario in which Clinton could have won. In the context of the 2016 election, Michigan is especially divisive: that fact that Michigan was part of Jill Stein's recount effort adds more salt to the wound.

Interestingly enough, Cult's Ally is a Jill Stein voter who insists she just couldn't bring herself to cast a vote for Hillary Clinton. "When I got into the booth, I couldn't do it. I tried, you know that I did!" she says, pleading with her wife, Ivy (Alison Pill). "But as much as I hate him, I didn't trust her!" She goes on, "Come on, you can't blame me! She (Clinton) didn't campaign enough in the battleground states! She went to Arizona, for God's sake." This is a charge levied by more than just a fictional AHS character. Ahead of the election, many critics believed Clinton was wrongly focusing her efforts on the ground. After the election, many more voices (notably some Bernie Sanders supporters) claimed Clinton ignored the most important swing states.

Back in the scene with Ally, Ivy snaps back, "We needed 10,000 votes, and you would have been one of them." This moment seems to encapsulate the game in American Horror Story: Cult and shine a light on Murphy's world view. The election has come and gone, but the characters would rather deflect blame and point fingers than focus on living in this new reality. Ally's logic is pulled directly from the perceived attitude of so many American people in the final months of the election race as publications from The New York Times to Washington Post were publishing think pieces about why we simply "couldn't trust" Hillary. This moment also seems to touch on another kind of rhetoric that was adopted near the end of the election: "I hate Trump, but I'm voting for him anyway." It was an attitude carried by some Republicans and on-the-line Democrats who, as Ally puts it, simply "couldn't do it" when it came to voting for Hillary.

The core of American Horror Story's message seems to be a mixture of these realizations: there's the same shock many Americans felt the day after the election, the desperation to look back and figure out what went wrong. AHS seems to posit that everything has changed for the worse — and forever — so there's little use in rehashing it. Murphy's Cult characters can live in denial all they want, but the clowns will come out with sharpened knives and terrifying, painted-on grins either way.

Netflix
Netflix Bids Grand Army Goodbye After Just One Season, and We're Not Sure How to Feel
by Grayson Gilcrease 4 hours ago