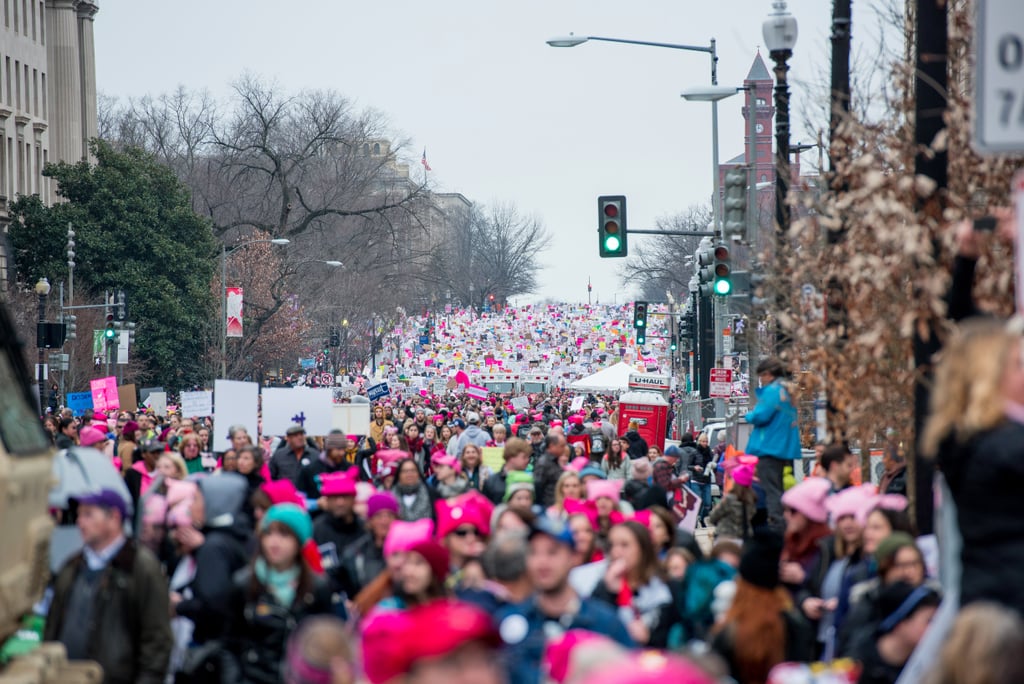 Update: As of Monday morning, a new and stunning estimate of the Women's March crowd size has been taking over social media: according to University of Connecticut professor Jeremy Pressman and University of Denver professor Erin Chenoweth, more than 1 in 100 Americans turned out for the historic demonstration. The duo estimate that as many as 4.6 million Americans joined the March.

Original story: When one grandmother in her 60s came up with the idea to march on Washington as a way to express her emotions following the election, no one predicted that this would turn into a massive event taking over cities around the world. The bright pink crowds in Washington DC are already predicted to be bigger than the inauguration, and that's just one of the many cities protesting.

As of 11 a.m., DC saw more than 275,000 Metro rides on Saturday, which is "more than eight times a normal Saturday and even busier than most weekdays," Metro officials wrote on Twitter.

The enormous crowds are loud, radiating bright pink, and preparing to march. They are carrying powerful signs to protest the policies President Donald Trump and his cabinet support, just one day after he was sworn in. Swarming the train stations, the buses, and the streets to head to Washington DC, the crowd may make up the biggest march in inauguration history.

In fact, the march in Chicago was so big that it is no longer being considered a "march" and has since been changed to a "rally," as reported by Chicago Police officials. In addition, the organizers in DC can no longer make a formal march to the White House, because the planned route is so full of protesters, according to a District of Columbia official.

Keep reading to see some of the jaw-dropping photos of Women's Marches around the world, and then find out if there's a march happening in a city near you.