For many Muslim-Americans, it was an emotional weekend — not just because of President Trump's Muslim ban, but because of the outpouring of support for Muslims and refugees that it sparked.

"We've cried like three times already," said Rokaya, an 18-year-old Iranian-American at the San Francisco International Airport protests who chose not to give her last name. "When they were talking about Muslims and how it was OK to show your beliefs, it was really nice to hear from such a big crowd," she said about the demonstrators.

At the San Francisco International Airport, hundreds if not thousands of people gathered on Friday and Saturday to speak against Trump's executive order banning refugees and citizens from Iran, Iraq, Somalia, Sudan, Syria, Yemen, and Libya from entering for 90 days. Rokaya was there with Janah, her best friend since middle school. Janah, who also chose not to give her last name, is Muslim-American; her parents were born in Yemen. "We were trying to get my aunt to come from Yemen because it's dangerous there right now. But now, she's stuck there," she said. "It makes me really sad and it's really frustrating, but it's really nice to see everyone coming together and supporting."

"I'm amazed and impressed with all this love, and I'm so happy. Thank you, Americans."

Some like Zainab Litto, a 30-year-old Muslim-American citizen originally from Morocco, had a direct message for Americans who were protesting: "I've been here for almost 10 years . . . I'm amazed and impressed with all this love, and I'm so happy. Thank you, Americans. That's what makes America great."

Others wanted their children to feel the love, too. Amnah Ibrahim, a 34-year-old Muslim-American from Fremont, CA, went to the San Francisco protest with her four young daughters partly so they could see how many people support Muslim-Americans. "All these people are here supporting Muslim-Americans," said Ibrahim, who was born in California but whose parents are Palestinian. "I want them to know that this is America, not what they may hear, all the negative things." 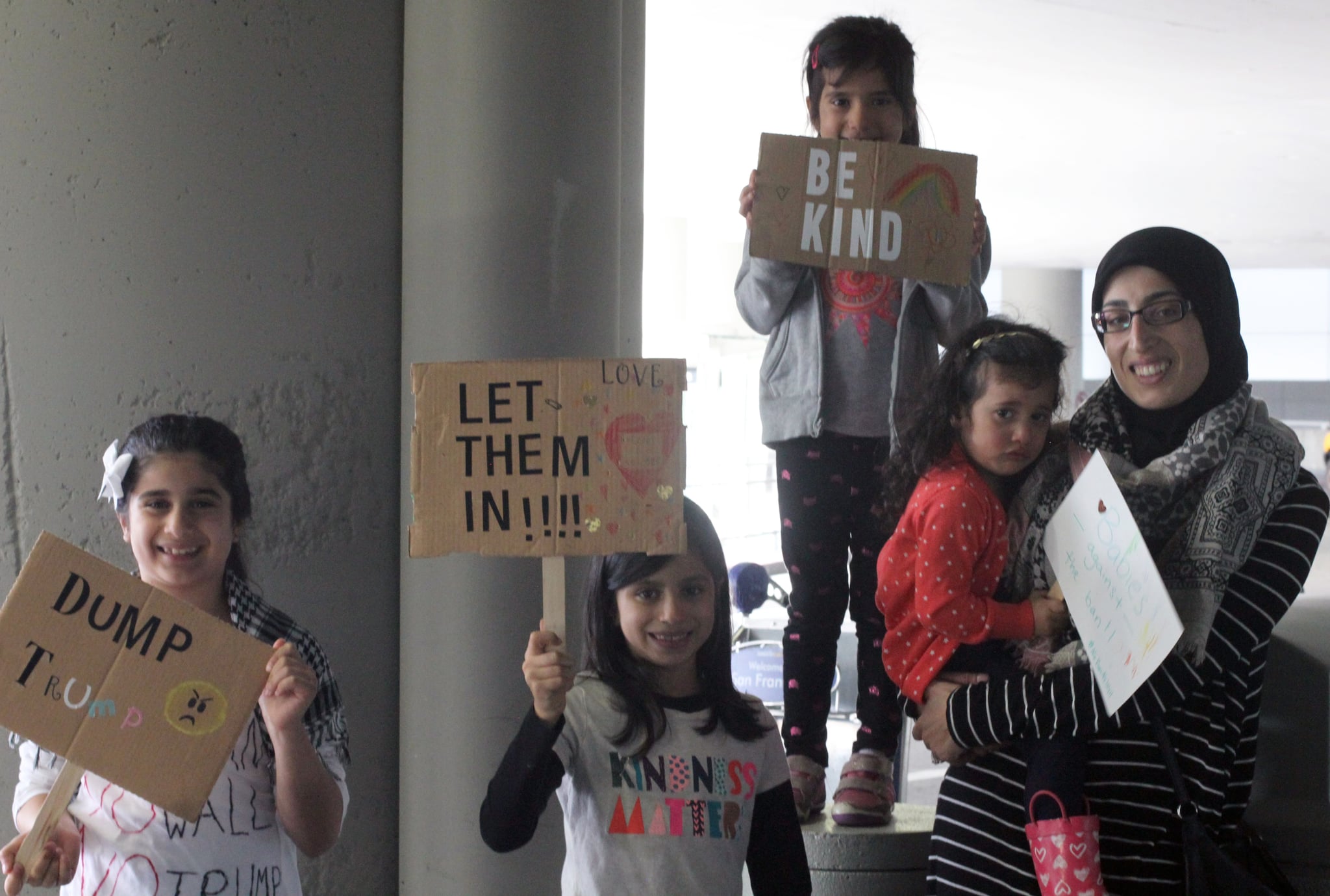 Protesters at SFO identified with many different backgrounds: white, black, European, Latino, Persian, Chinese, and Indian — like 28-year-old San Francisco State University student Ruqaiya Modan, a Muslim-American whose parents were born in India. "I have family in India who are trying to come here. This land actually belonged to Native Americans, so he [Trump] shouldn't be here if none of us are supposed to be here," she said. "I feel a lot of support and it's making me emotional. I thought there were a lot of racist people around, but I see this crowd that are being really supportive — it's really nice that they're being really supportive."

"If you ask me, I would never live anywhere else, so I'm going to do whatever I can for any community."

And for others, despite the ban, the US is still the land of the free. "I'm so grateful, that's what makes us so different from any other country," said Saidi Adem, a 56-year-old Muslim-American who came to the US from Ethiopia in 1982. "If you ask me, I would never live anywhere else, so I'm going to do whatever I can for any community. I'm going to stand up for humanity."

While some might argue that this sentiment is limited to those who live among "coastal liberal elites," it should be noted that protests against Trump's ban spread all across the country, including states like Indiana, the Carolinas, Texas, and Kentucky. 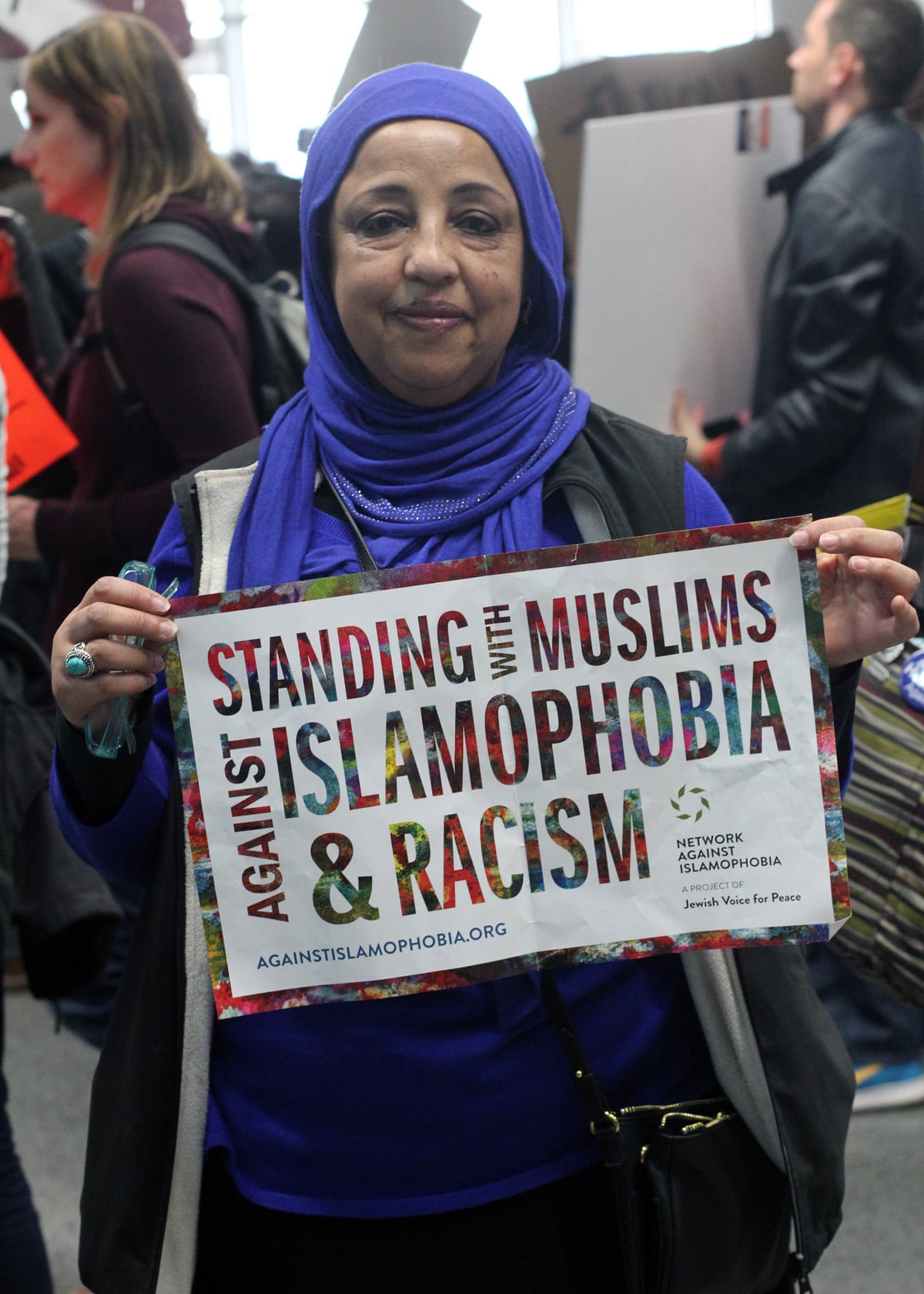