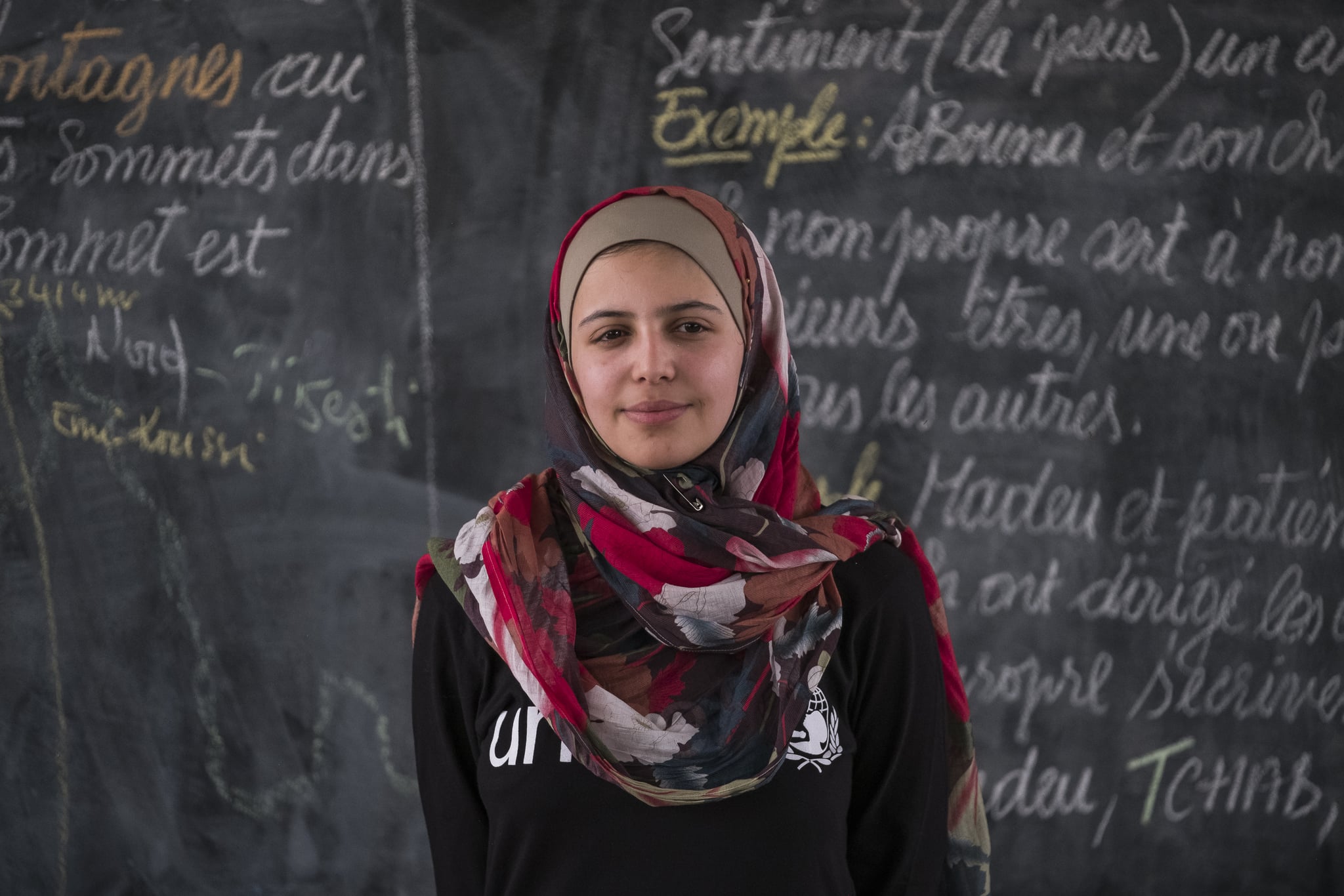 Muzoon Almellehan was 13 years old when a civil war forced her to stop going to school in her hometown of Daraa, Syria. Fast forward six years and Almellehan, 19, is one of the lucky ones. She now lives in Newcastle, UK with her family, where she's preparing for college — and making history. In June, she became UNICEF's youngest Goodwill Ambassador, joining the ranks of such household names as Serena Williams, Harry Belafonte, and Katy Perry. Her aim is to get more children — particularly girls — into school and educated around the world. In many ways, it's fitting that she is often referred to as the "Syrian Malala," and that she considers Malala Yousafzai both a friend and role model.

Refugee children don't just lose their homes and countries when they're forced to flee. Often, they must also give up education and, in turn, their dreams for the future. Only half of refugee children are enrolled in primary school, according to UNICEF data, and just 25 percent of refugee youth are enrolled in secondary school. In conflict-affected countries, girls are more likely to be out of school than boys.

During her fourth trip to New York City on Sept. 19 — this time for the United Nations General Assembly — Almellehan sat down with POPSUGAR to discuss her journey to the UK, the importance of educating girls, and what people need to know about refugees. A day later, Almellehan travelled throughout New York City in a convoy of 27 empty school buses to symbolize the 27 million children who are out of school in conflict zones, five years after she began campaigning for education rights aged 14.

I believed that if I lost my education, I would lose everything in my life.

POPSUGAR: Tell me about your journey from your hometown in Syria to the UK.
Muzoon Almellehan: When the war began in Syria, our lives changed. We had nothing in Syria during the war; for example, no access to our basic needs like food, access to education. My father couldn't work. We were worried about bombing; at any time we would die. So that affected us. We had no choice but to flee.

My father decided to go to a refugee camp in Jordan. First, we lived in Zaatari camp [located near Syria's southern border with Jordan]. I didn't want to leave my country, my friends, and especially my school. I was worried that I couldn't continue my studies in a place like a refugee camp. I believed that if I lost my education, I would lose everything in my life.

When I lived in the refugee camp, there were many challenges. There was no electricity, and we had to bring water from a very distant place. We lived in a tent. We started everything from zero, to make new friends, to make relationships with our new neighbors. All those things were so difficult, but for me personally, I didn't care about them. My worry was just my education. When I arrived at Zaatari, I asked about the school. When I realized that I could continue my studies in the refugee camp, I was so pleased. I saw that my education could change that difficult situation, and I could make a difference for myself and others as well.

PS: Why is education so important to you?
MA: When I lived in refugee camps, I saw many girls and boys and also parents who [thought] that education is not a priority. So I encouraged them to go back to school because education is important for me personally, and I consider it an important part of my life. I consider it important for others because Syria does not need me alone, it needs a strong generation. We can build that strong generation only by education. I tried my best, and I did as much as I could to encourage them to be educated people and consider education as a priority.

I just want people to know that refugees need you.

PS: And why is it important for girls especially to have an education?
MA: Education in general is something really important for everyone, no matter if you're a girl or a boy, or even if you're an old person. Girls are sometimes missing in the community. Some people think in their culture, in their norms, that it doesn't matter for girls to be educated. That it's better for her to sit at home to do cleaning, washing dishes, or raising the children. Women should have an education because the woman takes care of the children, and once we have very strong women with education, she can give us a strong community. When she's educated, she can teach her children and give them knowledge. When we can't have women as strong people, we can't have healthy and safe communities. That's really important because education is the only way that helps us to build our communities and face the challenges in our lives. 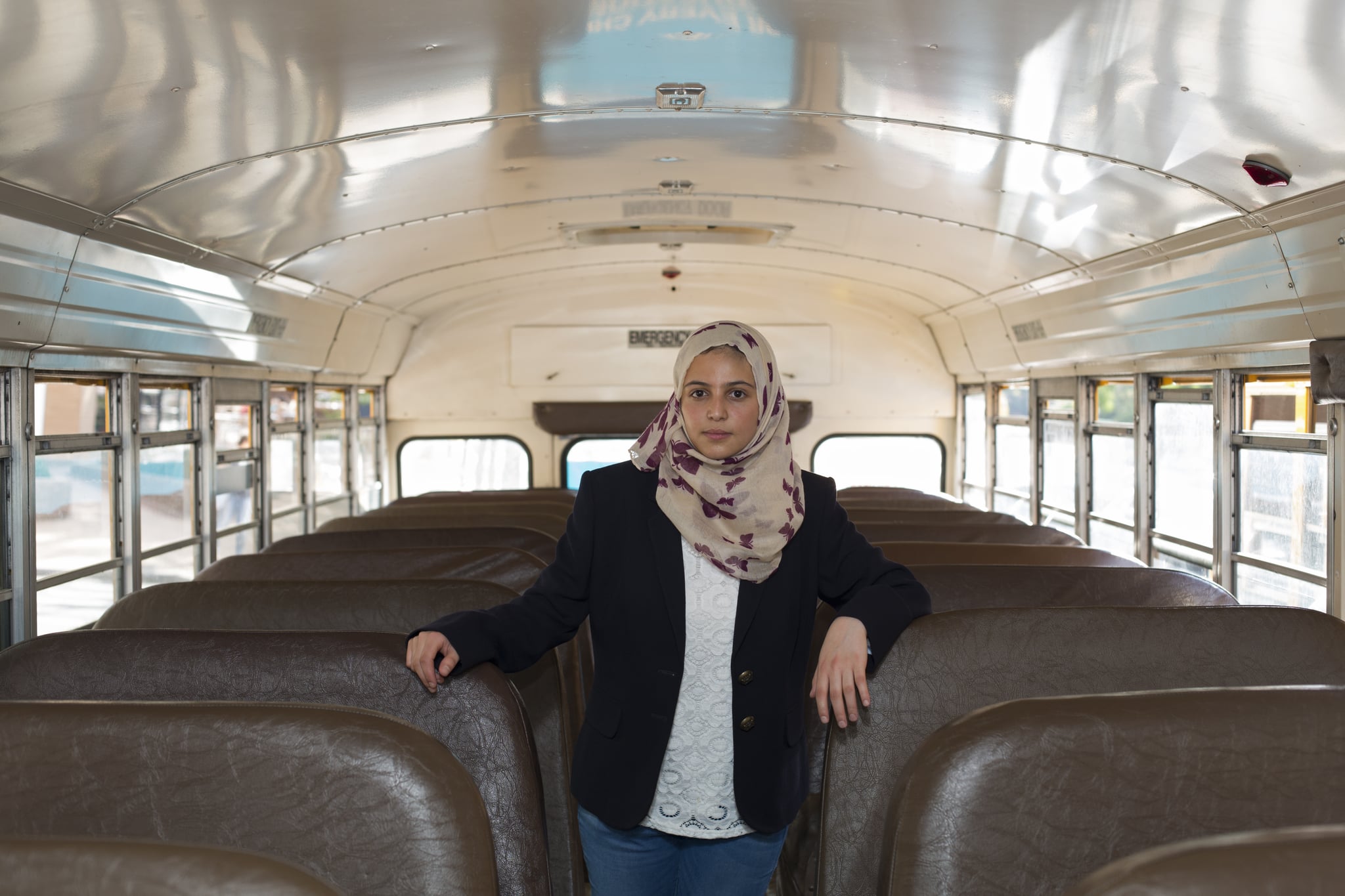 Al-Mellehan stands on one of 27 empty school buses that UNICEF drove through Manhattan on Sept. 17, during the United Nations General Assembly. The buses represent the 27 million children who cannot attend school because they live in conflict zones. Photo courtesy of UNICEF / Tom Pietrasik.

PS: In many countries, including the US and UK, there is often a stigma against and negative feeling toward refugees. What do you want people to know about refugees?
MA: There are many people who don't know anything about refugees. Before I became a refugee, I didn't want to become one, because I thought it was something shameful — or people will think I'm a different person, not a good person, a person who needs help all the time or who needs food. When I became a refugee and started campaigning for education, when I just tried to look to the positive sides of my life, I realized something: a refugee is a strong person, a refugee is a person who has had difficult experiences and difficult circumstances, which forced that refugee to become a refugee.

For you to become a refugee, it's not your choice, but it is your choice to go to a safe place to find new ways to live a normal life. That means when you become a refugee and you want to flee war or conflict, that means you want to start a new life and continue this journey in life. This means you are a strong person who believes in life and believes that you matter in this life. For this reason, I want to survive and to be somebody in this world. I don't want just to die in this war and nobody knows me. I am a person who has a voice. Refugees are normal people like others. They are people who have hope, and they have rights.

I just want people to know that refugees need you because they have difficult lives, so we need to give them opportunities, like welcome them into our countries. They deserve our attention, and they deserve for us to know that they are strong enough to rebuild their countries in the future as well. They need us in these difficult times. It is lovely, actually, for people to love us when we are citizens in our countries, but we appreciate it more when we have difficult times and people believe in our abilities and believe that we are strong, even if we are suffering.

PS: When you're done here at the UN General Assembly, what is next for you?
MA: I'm in my last year of A-levels in the UK; it is really tough. When I'm done with my work here at the General Assembly, I'm going back for homework. Next year, I will apply for university, and I'm looking to study politics and international relations. I love journalism, and it is a lovely job, and I would love to work in this field in the future.

This Q&A has been edited and condensed for clarity.