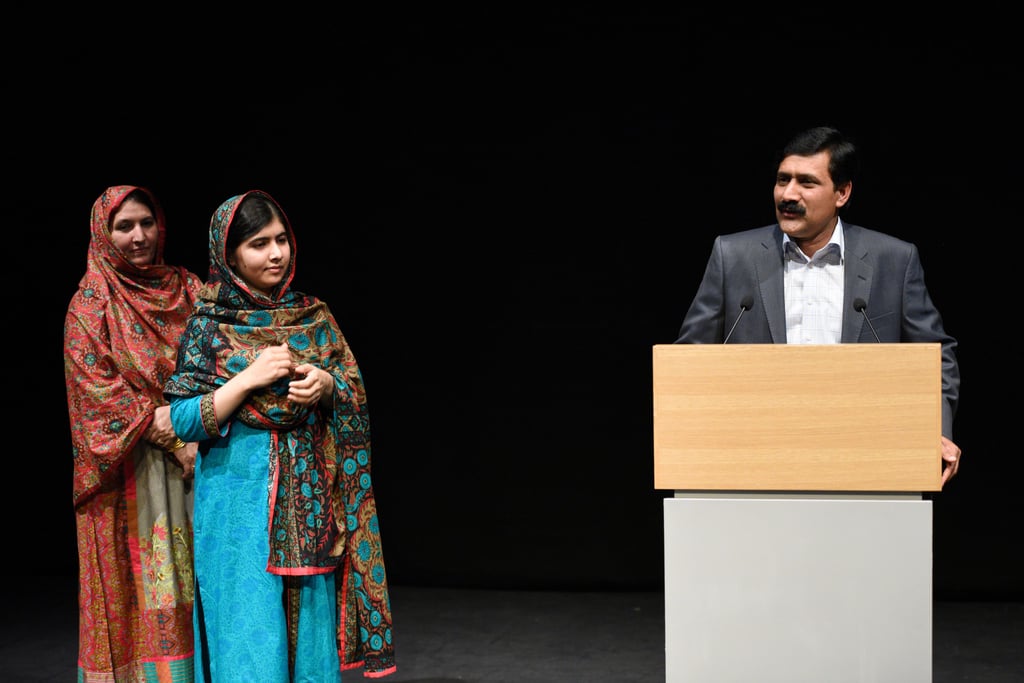 Many sons and daughters consider their parents heroes, but for Ziauddin Yousafzai, it's the other way around. You've probably heard of his daughter, Malala Yousafzai, who was shot by the Taliban for defending a woman's right to be educated and is the youngest person in the world to win the Nobel Peace Prize at age 17. But even well before that incident, Zia knew Malala was extraordinary and the two became incredibly close. "She was such a brilliant and lovely child. She enjoyed my company and I enjoyed her company," he says. "This became a very strong bond between us."

We recently spoke with Zia about his relationship with Malala, the fight for women's education worldwide, and their involvement with the Syrian refugee crisis before the documentary He Named Me Malala airs on National Geographic this evening. Turns out, his story is incredibly inspiring, too.

Before Malala was born, Zia was an activist for women's rights and education. "Education has changed me as a person, education has changed my daughter as a person, and I have seen many people who are completely changed because of quality education," he says. As the son of a religious leader in his community, Zia received a modern education where he learned math, science, and English, but his sisters were not sent to school. Though Zia believes what happened to his sisters was wrong, he says it would have been unusual for his father to educate his daughters because of his religious role in the community. Even Zia's modern education was contested, but he is thankful that his father sent him to school, "in spite of pressure from some of the people in the village." Witnessing his sisters get denied the right of education is what inspired Zia to open a school where both boys and girls could attend.

It is also one of the many reasons that make Zia's relationship with Malala unique. In Pakistan, women are 61 percent literate, while 79 percent of men are literate — instead of learning how to read, women are taught how to cook and keep a home. What's more, many fathers there do not encourage their daughters to go to school. Zia was adamant that his daughter and her peers would not be confined to their homes."If you go to a patriarchal society and you ask a father, 'Do you love your daughter?' they will say 'Yes, I love my daughter,'" he says. "But, if you then ask him 'Why don't you send her to school? And why isn't she equally treated like boys?' I think they would not have any good answer for that."

Zia's wish for Malala deviated drastically from the norm since he "did not clip her wings" and he encouraged her to be free, just like the boys. Malala was deeply curious from a young age and Zia fostered that by bringing her to different gatherings, galas, festivals, and meetings whenever it felt suitable to take her. As she matured, Malala's bond with Zia only strengthened — but during her childhood, the Taliban's presence where they lived, the Swat Valley, also increased.

By 2008, the Taliban controlled most of the region and ordered the schools whose curriculum were considered modern to close. Zia was targeted by the Taliban repeatedly for not closing the doors to his school; they sent him death threats and labeled him a public enemy. When BBC Urdu inquired if Zia would nominate a student to journal about daily life in Swat under Taliban rule, no one volunteered because it was too dangerous. Though she was only 11 at the time, Zia suggested Malala could write the blog and BBC Urdu agreed. Malala began chronicling her experience going to school anonymously, but within a year of her initial post, Malala publically advocated for women's education in Pakistan — inspired by her father, not because Zia pressured her to do so.

As soon as her identity was revealed, Malala was targeted like her father. But despite the multiple fatawa (sometimes considered to be Arabic for death sentence) decreed against their family, Zia and Malala remained resilient. After the Taliban attacked Malala on her way to take an exam, shooting her and two friends, they remained resilient — if not more strengthened when Malala recovered.

Zia insists he did not force Malala into educational activism; he points out if he had goaded Malala into defying the Taliban, she wouldn't have continued after she was shot because Zia would be to blame for endangering her. He says because Malala was afforded an education, she was "taught to ask questions" from a young age and empowered to question the Taliban's unjust authority. Zia's admiration for Malala exceeds the typical pride: he considers her one of his heroes because "she never fails, in terms of the values she believes in, expressing her views, her vision, and her wisdom."

He dreams of the day when every girl in the world is free, independent, and "part of the other half of this world that is composed of men," but he realizes there is a long journey to that goal. When asked about his greatest wish for girls' education worldwide, Zia answered, "There's no magic wand [to educate everyone in the world], but education itself is a wand that has a magical power." If women are encouraged to go school, they will be empowered, and become leaders in their community. Zia also adds that if there were more women leaders, the world "would be much more peaceful and it would be free of war and conflict."

Malala's fame and success has received considerable backlash in Pakistan. Talk show hosts, the news, and local leaders have criticized Malala and Zia for being puppets of Western ideology; they have even accused her of being a spy. Malala's book was also banned from private schools in Pakistan. The reluctance to accept Malala's message has not disheartened or disrupted them, however. "The more they want to make us to be shaken, the stronger we strain, like a rock, because it strengthens our beliefs, our values, and our mission to have a peaceful society where the children can ask every question and where they are not indoctrinated, where they are educated," Zia says. Recently, when Zia talked to Malala about a talk show in Pakistan where they were condemned, her only response was, "Oh, it means we've had an impact!" Zia pointed to this moment as another reason Malala is his hero.

Looking forward, Zia and Malala are committed to bringing education to the 700,000 Syrian refugee children in camps in Lebanon, Turkey, and Jordan — as well as the two million children who are without school in Syria. Through the Malala Fund, they have opened a school for Syrian girls in Lebanon and they have invested in other projects there. But, the Malala Fund can only do so much. Zia urges the world — from developing countries to developed countries — to support the Syrian children so that they will not be a generation lost. Comparing the Syrian children who are not in school to the Afghani children who were not in school for ten years during the American invasion, Zia says, "We still suffer because that generation, who were not sent to school, now they are in the mountains, they are fighting their own people, killing their own people." Malala has been working with a girl named Muzoon — sometimes referred to as the Syrian Malala — to compel world leaders to act before it is too late.

Malala was named after an Afghan folk hero and warrioress who mobilized local fighters to defend against invading British troops — like her namesake, Malala has rallied the world to fight education inequality. Zia's support and love for Malala allowed her to flourish into the activist she is now. But ultimately it was Malala's education, not him, that gave her "wings to fly."

Celebrity News
John Krasinski Teamed Up With Oprah, Steven Spielberg, and More For a Virtual Graduation
by Chanel Vargas 5/03/20 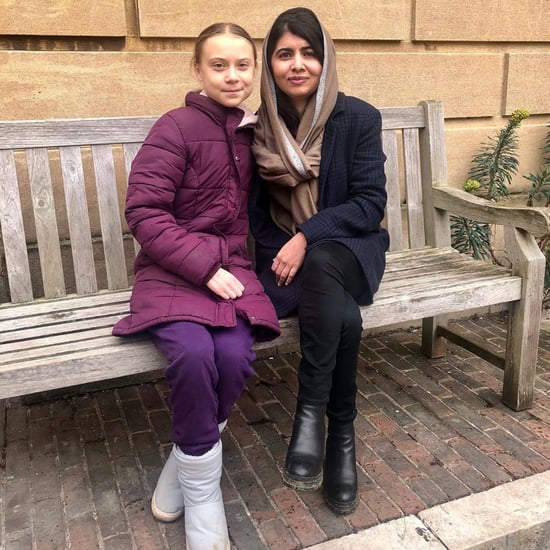 Greta Thunberg
Greta Thunberg and Malala Yousafzai Finally Met, and This Feels Like a Historic Moment
by Chanel Vargas 2/25/20