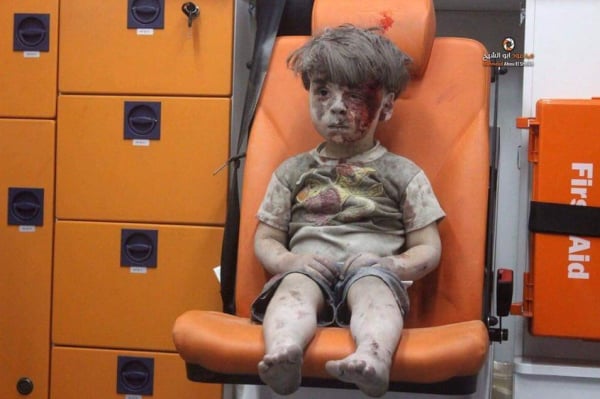 The little boy sits on an orange chair in an ambulance wearing shorts and cartoon t-shirt. His face is smeared with blood dripping from his head, his body coated in dirt from the rubble. It's impossible to forget him.

His name is Omran Daqneesh and he was injured by an airstrike in Aleppo, Syria. A photo and video of him looking dazed in the ambulance quickly went viral across the world on Wednesday, many calling him an iconic face of violence resulting from the Syrian war. Doctors told The New York Times Omran is 5 years old and said he suffered from head wounds but was discharged.

The building where Omran pulled from collapsed and eight people died, including five children, reports the Times. Omran's three siblings (ages 1, 6, and 11) survived, as did his mom and dad. The air strike is believed to be the work of Syrian government or Russian warplanes that targeted the rebels in the area.

A videographer named Mustafa al Sarouq with the Aleppo Media Center captured the video, in which we see Omran rescued from the building and looking confused as he touches his head only to get blood on his fingers. He wipes them on the chair. The imagery is so powerful, CNN host Kate Bolduan teared up while reporting on Omran's story.

"This is Omran. He's alive. We wanted you to know." CNN anchor Kate Bolduan gets emotional while reporting on this heartbreaking photo from Aleppo, Syria http://cnn.it/2b4wW4y

Since the start of the Syrian war in March 2011, more than 18,000 civilians in Aleppo have been killed, according to the Syrian Observatory For Human Rights. More than 4,500 of them were children under age 18. The videographer al Sarouq told CNN, "The truth is that the image you see today is repeated every day in Aleppo."

Omran's story comes a week after 15 doctors in Aleppo wrote a letter to President Obama urging for help. "We do not need tears or sympathy or even prayers," they wrote. "We need your action. Prove that you are the friend of Syrians."

Hopefully those who see Omran's story don't think it ends there; his family now has nowhere to live, another devastating consequence of the war that many face even after they survive the horrors of bombs and air strikes, horrors that can never be truly conveyed in photos or videos, no matter how viral they go.