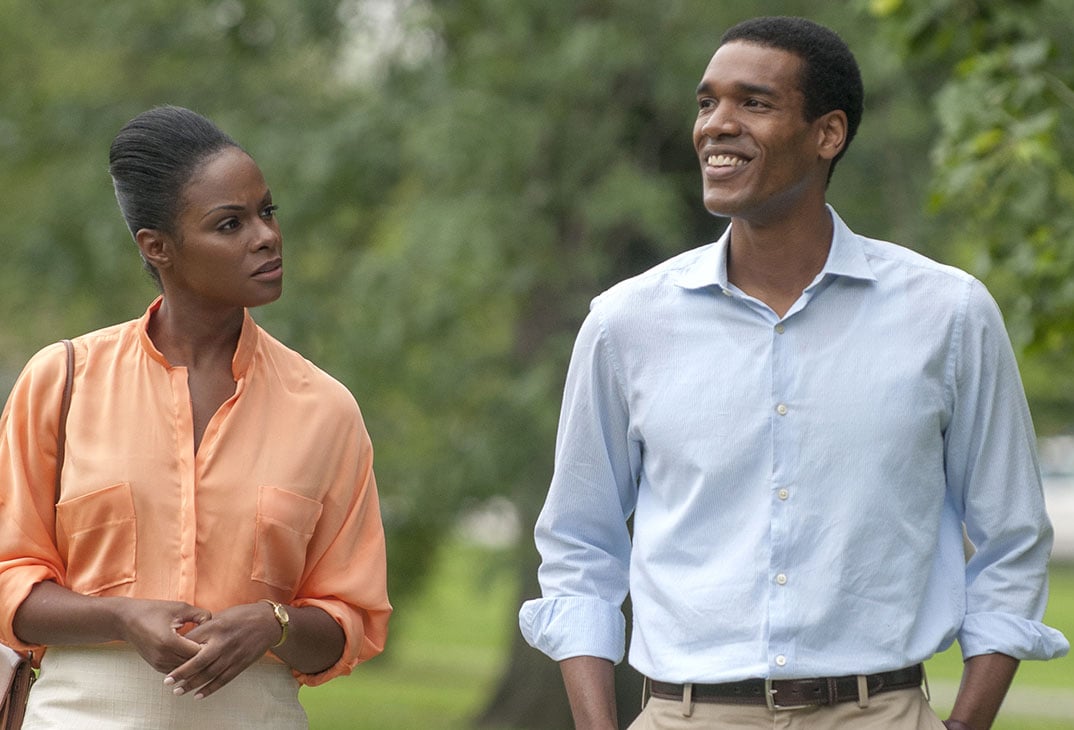 It's the Summer of 1989, and a smooth 28-year-old Barack Obama is about to go on his first date with Michelle Robinson. Well, it's not technically a date at first since 25-year-old Michelle refuses to call it that, but the future president tries his hardest to win her over after picking her up in a car with part of the floor missing.

In the new movie Southside With You, we follow along as Barack and Michelle spend a day in Chicago going to an art exhibit, a community organizing event, the movies to see Do The Right Thing, and eventually, an ice cream shop where the two share a kiss. Back then, Barack was a Harvard Law student and Summer intern at the Sidley Austin law firm where Michelle was a second-year associate and his adviser. In many ways, this film version of their down-to-earth yet deep-rooted first date reflects the type of first couple they'd eventually be.

"From all the accounts that I read, when Michelle walked in a room, it was like, 'Who's that girl?'"

A rom-com about the Obamas might sound cheesy, but the crew pulls it off. It stars Tika Sumpter as Michelle and Parker Sawyers as Barack and was produced by John Legend (as well as Sumpter) with directing credit going to Richard Tanne. Sumpter and Sawyers do an incredible job of capturing the mannerisms and speech patterns of the first couple without overdoing it or making it feel comedic rather than genuine. It's even more impressive when you learn they only had about a month and a half to prepare for the role by poring over old videos and books about the two. The film has already gotten glowing reviews and became a hit when it showed at the Sundance Film Festival.

One of the biggest takeaways from the film is how much we learn about Michelle. When we chatted with Sawyers, he said the most surprising thing he learned in his film research was how accomplished she was.

"It's all about Michelle. I'm surprised, I didn't realize she graduated Harvard at probably 23, 24, if she was a second-year law associate at 25 years old," he said. (Michelle earned her undergrad degree from Princeton when she was 21 and her law degree from Harvard at 24.) "It's hugely impressive. I mean, I knew she was smart, I knew that she was his equal, but I didn't know perhaps she surpassed [Barack's] intelligence."

Of course we don't know if some of the details and dialogue actually happened, but we can imagine the truth to it. A striking moment in the movie comes when Michelle tells Barack why she's hesitant to date him in the first place: it's hard for women to make a name for themselves at the firm, but she has to work twice as hard to earn respect as a black woman. She doesn't want to be taken less seriously if she starts dating the first cute black guy who comes in. "So you think I'm cute?" Barack answers, making light of the moment.

For Sumpter, Michelle's contagious personality left a lasting impression. "I didn't know she was that confident at such a young age. From all the accounts that I read, when she walked in a room, it was like, 'Who's that girl?'" she said. "People loved her, like loved her in school, high school, and her magnet school that she went to. She had this thing about her from the beginning."

We see this shine through in various moments of the film, like when Michelle spontaneously joins a drum circle and dances at the park outside the art exhibit; and we see it today in real life, be it through Michelle's viral Carpool Karaoke video or when she learns how to Snapchat from the guys who started the Running Man Challenge or when she dances with a 106-year-old woman during Black History Month at the White House.

The characters reach emotional highs and lows when they talk about the absence of Barack's father and Michelle's desire to do something more meaningful with her life besides working at a corporate firm. They make each other uncomfortable with these discussions but push one another to complex realizations. It all comes to a head when Barack revisits the community organizing group in Chicago where he used to work and gives a rousing speech encouraging the audience to imagine walking in somebody else's shoes to understand where they're coming from. "You can see where that sort of attitude in politics, or wherever — it can take you really far," said Sawyers.

The film does its best to mirror their actual first date; from what the first couple has described before, we know they went to an art exhibit, had lunch at the art institute, took a walk, went to the movies, and had ice cream.

Most of all, the movie does its job because it gives us more of a couple that people already feel like they know and appreciate. "One of the reasons that the film works as well is because they've shown us so much of themselves over the past eight, 10, 12 years when they've been in the limelight," said Sawyers. "There are quite a few politicians that are very politiciany and very closed off and if you saw a romantic film about them you'd just be like, 'Really?' But with this one, you buy it. You say, 'Yeah, I could see it being like that.'"

Some might see the film because they're sad to see Barack and Michelle leave White House, but it has appeal regardless of politics.

"It's not a political film and hopefully people can come in with their guards down," said Sumpter. "The other day, somebody said, 'My 8 year old saw it and was like, "Are you and Mommy like that? Did you guys meet like that?"' If an 8 year old can relate to it, I'm sure a grown person with whatever political stance they have can take that off for a second and just be in a movie."

Southside With You opens in theaters on Aug. 26.