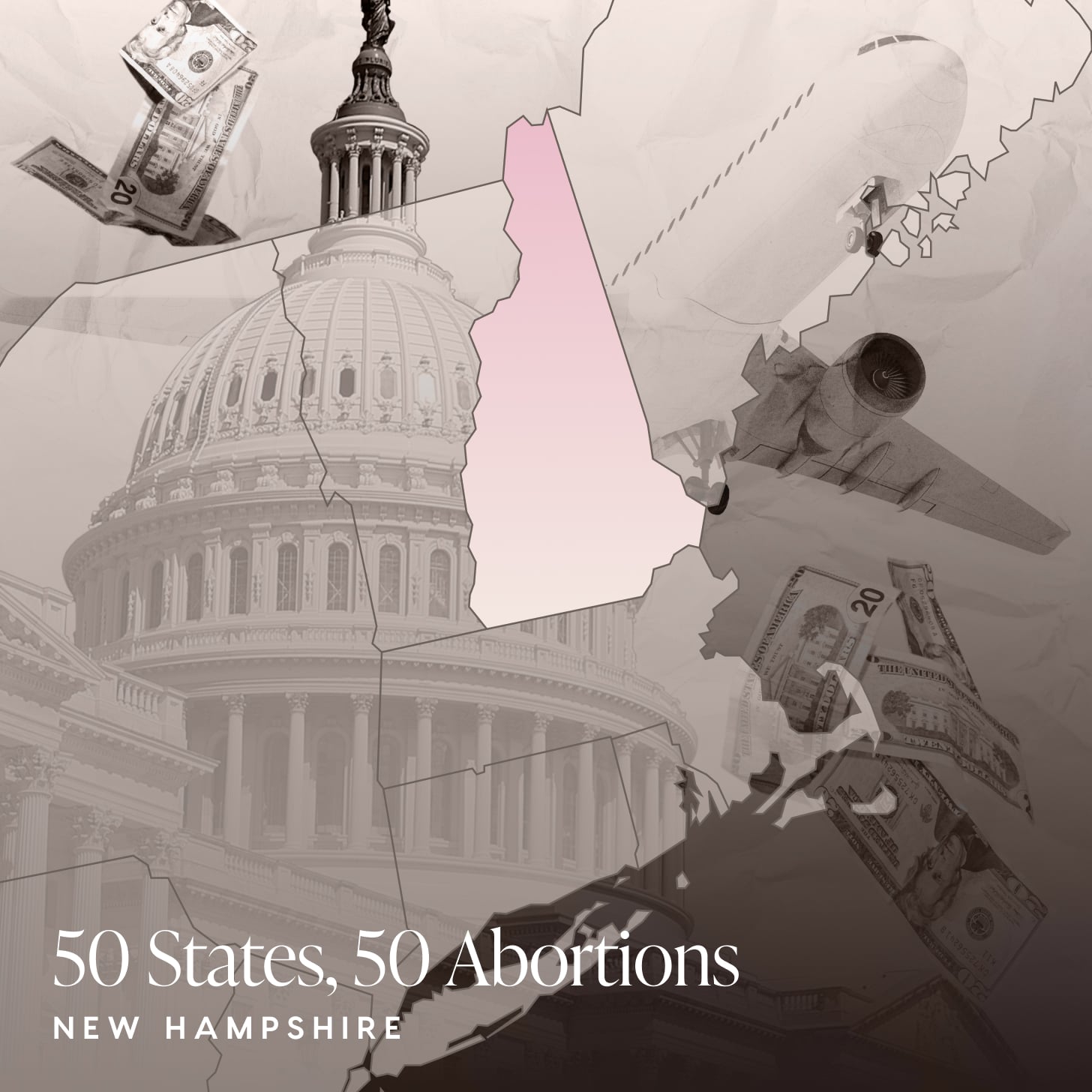 I was 22 years old. I had just graduated from college, maybe fewer than 30 days before. I moved to New Hampshire with six friends, including an ex-boyfriend, who became my boyfriend again very quickly. He'd cheated on me twice, and we'd gotten back together for the second time. I wasn't on birth control yet, because we had literally just gotten back together.

All our roommates were gone that day. We were having sex on the couch, and we'd had a conversation right before where he said he'd pull out. Of course, he didn't. Afterward, he said to me, "Oh, I forgot, was I supposed to pull out?" Yeah, dumbass, you were.

I said, "We just made a baby. I felt conception." And I had; I'd felt it. It felt like those tiny, ghost-y fireworks you throw on the ground around the Fourth of July. They just go "pop" real fast and quick. That's what it felt like in my belly. I'd been having sex since I was 17, and I'd never felt that before.

I realized pretty quickly that my cycle was late. I was at work, and a friend went with me to get a pregnancy test during our lunch break. I was in the bathroom with a few coworkers, and when it came back positive, I screamed so loudly, "No!" It was guttural. It just came from the middle of my belly. I'll never forget that moment.

We lived in New Hampshire, where the state motto is Live Free or Die, and even though my boyfriend cheated on me, drank a lot, and smoked a lot of dope, he was very supportive during this time. He left it to me and said it was my decision. He supported me either way. And I chose abortion because I didn't have another option. I had no desire in carrying a baby and giving it up for adoption. I had no desire to keep the baby. I was [22]. I had literally just graduated from college. I was starting my life. I made minimum wage. How could I raise a kid on that?

I remember finding out about Planned Parenthood. They gave me the option to go to Maine for the abortion — I think in New Hampshire at the time, there were only a few days a week that you could get one. My boyfriend and I had to drive to Maine. We both had to take the day off work, and the abortion cost $350, which we did not have. We were broke as hell. That was our electric bill. That was our whole utility bill! I think we actually borrowed the money from friends.

It was scary. My boyfriend couldn't even go in with me. Some random nurse, who was very lovely, was holding my hand. I'll never forget the noise. It's very vivid in my mind. I remember that when we went out to eat afterward, I thought about how I could now eat without puking, because the pregnancy had made me so sick, I'd been throwing up all the time.

I remember the relief afterward. I just resumed my life. My abortion wasn't anything I lamented. I started taking birth-control pills, and I want to say thank you to Planned Parenthood because it had a sliding scale, and it cost me five bucks a month to get my pills.

I still have no regrets. To this day, no regrets. Would I have been a great mom? Yes. But I am grateful every day that I am not a mother. I'm not cut out to be a mother! I would have a 27-year-old kid right now, and I would not be where I am today. There's no way I would be living where I live, which is in Washington State, versus New Hampshire or Kentucky, where we met. I would never have become a state senator. I know that for a fact.

Before I started speaking out about my abortion, I had shared this with maybe seven people, because it's still shameful to many. And I'll tell you what: why are we, as women, ashamed? In my case, he didn't want to wear a condom because "it doesn't feel as good." He said he would pull out — "oh, [he] forgot." It's ridiculous that we women are bearing the burden of the shame. We need to end [this], and this is why I shouted my abortion.

I don't think my boyfriend ever thought about it again, but I've been carrying around this shame for 27 years. It's ludicrous.

I am grateful that my abortion did not put my life at risk. I had a medical doctor at a medical facility, and I never once feared for my safety. I would've had an abortion whether it was illegal or not, because I did not want a child at 22, fresh out of college.