NYC, 1975: The annual then-called "Gay Rights March" on Fourth Street. (Image Source: Getty / Peter Keegan)
By now, the LGBTQ+ acronym is so common and well known, it's hard to imagine it was ever anything else. Often shortened to LGBT (but meaning so much more), the abbreviation might just represent the most diverse and inclusive group of minorities in the current social landscape. What started as a declaration of sexuality grew over time to include a more fluid idea of sexual orientation, an array of varying gender identities, and eventually, a scattering of what might be considered "fringe" identities which, quite strikingly, don't fit into any box at all. With a civil rights movement spanning decades, we're tracing back to the origins of the LGBTQ+ acronym, from that very first G to the intricate map of humanity we know today.

The History of the Words "Gay" and "Lesbian" 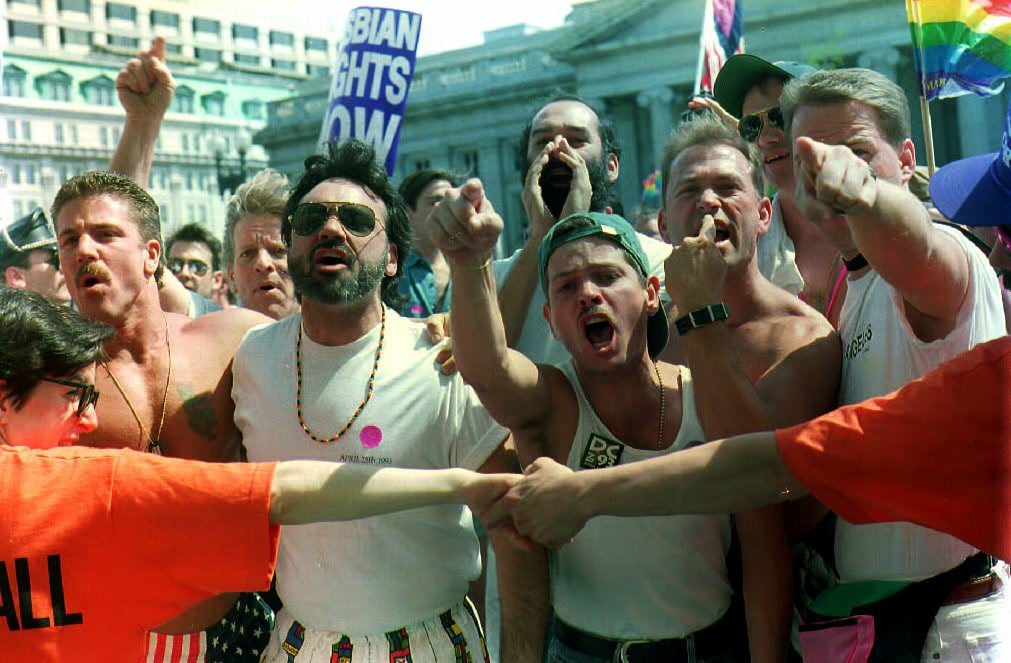 Washington DC, 1993: A group of protestors among the hundreds of thousands to march and rally for equal rights.
Image Source: Getty / Aryeh Rabinovich

It's pretty common knowledge that the word "gay" originated as a term that means "happy" or "excited." In fact, that's the primary definition listed by Merriam-Webster. According to the Encyclopedia of Homosexuality, the term "gay" wasn't widely considered to be synonymous with homosexuality until 1955, when English journalist Peter Wildblood declared it so in print. Many believe the term has circulated orally for decades before that, but this was the first time on record that someone defined "gay" as "a euphemism for an American homosexual." As time went on, gay, for a time referred to both men and women who preferred members of their matching sex.

A long time passed before "lesbian" became directly associated with homosexual women. Well, sort of. The term actually traces back to a poet by the name of Sappho who was from the Isle of Lesbos. Sappho's love poetry equally embraced men and women, and "lesbian" thus came to refer to this erotic freedom that included woman-on-woman love. This is also why the word "sapphic," in addition to referring to Sappho and her poetry, also relates to lesbians, lesbianism, and female sexuality. But when it comes to using the word "lesbian" — not as slang but instead in the context of the gay rights movement — the development is much more recent. During the feminist movements in the '60s and '70s, homosexual women embraced the term as a way to distinguish themselves from gay men. This helped women better assert their presence in the fight for gay rights and to feel more visible in the community as a whole.

The Addition of Bisexual and Transgender Individuals

Bisexuality has been chronically overlooked as a sexual identity. One of the most common misconceptions is that people aren't really bisexual. Instead, these people are just straight and confused, or halfway along on the journey to accepting their own homosexuality. Up until the '90s, those advocating for the rights of those with same-sex preferences simply referred to the community as "gay and lesbian." Time reports that the acronym LGBT became popular near the end of the millennium. In the mid-'90s, there were still arguments on either end as to whether a person could truly identify as bisexual. In 2000, Marjorie Garber published a book called Bisexuality and the Eroticism of Everyday Life. It contained an in-depth study that finally established the bisexual identity as legitimate. 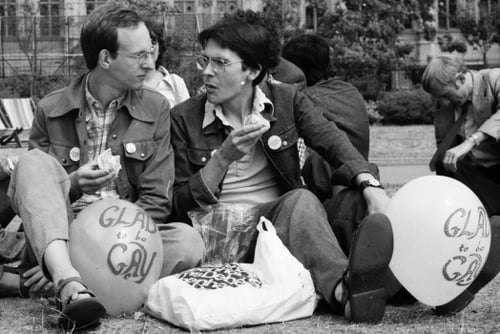 Adding "transgender" to the LGBTQ acronym was one of the more contentious decisions in the history of the human rights movement and remains controversial even well into the 21st century. Salon corroborates other reports that say "bisexual" and "transgender" were added at around the same time. Salon notes that "sometime in the late '90s, a few gay rights groups and activists started using a new acronym, LGBT — adding T for transgender/transsexual." This decision has been met with opposition. Many argued that the transgender community doesn't fit with the LGB in the acronym, since the former three deal with sexual identity, and the latter deals with gender identity. Even as recently as 2015, a Change.org petition demanded that the T be dropped from the acronym. The petition claimed that inclusion of the transgender community was "ultimately regressive and actually hostile to the goals of women and gay men."

Thankfully, the most prominent LGBTQ organizations in the country (including GLAAD and the Human Rights Campaign) spoke out and rejected the notions of the petition. These groups stood firmly behind the inclusion of transgender individuals. This division is part of a larger problem. The transgender community is quite commonly swept under the rug. Not only do transgender rights get different treatment in society, but there is a noted transphobia in the LGBTQ community. (Even the aforementioned petition is a testament to this internal bullying.) Furthermore, Associated Press reporter David Crary estimates that the transgender rights movement is about 20 years behind that of the gay and lesbian rights movement. Even the smallest acts, like fighting to keep the T in LGBTQ, matter a lot.

The Much More Recent "Q" Addition

Finally, we have the Q that lands us to the most common iteration of the acronym today. In October 2016, GLAAD CEO Sarah Kate Ellis announced the addition of the Q to the organization's official style guide. The letter would stand for the word "queer." Ellis stated: "On one level, it is just adding another letter, but really it is bringing a whole new definition to the way we describe ourselves. It's the start of a bigger shift."

"Queer" has historically been used as a derogatory term for gay men. As Time notes, it was repossessed by the community during the AIDS crisis ("We're here, we're queer, get used to it!"), and its modern-day use is much more broad. Instead of distinguishing oneself as gay or lesbian or even man or woman, the word "queer" establishes a sort of fluidity and freedom. It's a label that dodges the purpose of a label in the first place, and that's what makes it so impactful. From this, we've seen the growth of similar labels; someone who is genderqueer wishes to exist outside of the gender binary.

The "+" and All the Other Letters

From the LGBTQ acronym, there are many more distinguishing letters that denote a deviance from what society considers "normal" in the context of gender and sexual identity. There are a lot of different complete iterations floating around the internet, but one very comprehensive acronym is LGBTQQIP2SAA. It starts with the standard "lesbian," "gay," "bisexual," "transgender," and "queer," but then continues to outline a series of additional identities.

There's "questioning," someone who isn't sure about their identity. After that is "intersex," a person who has characteristics of both genders but ultimately does not meet society's definition of either male or female. After that is "pansexual," a person who sees beyond gender and feels attraction to another individual's spirit. The 2S refers to "two spirits." These individuals believe they have both a masculine and feminine spirit inside their bodies. The first A refers to "asexual," a person who doesn't experience sexual attraction. And finally, the final A is for "ally," a person who may not identify with any of the identities in the LGBTQ community but supports and advocates for those that do.

This is where the + comes in. It's quite a lot to write or say LGBTQQIP2SAA, so the plus is an attempt to incorporate any members of the community who do not feel represented by the LGBTQ acronym. This decision can, at times, be divisive within the community. Many members of the pansexual, asexual, intersex, and other communities often feel erased or underrepresented when it comes to LGBTQ+ discourse. This is why it's especially important to many people to include the + sign in modern discourse. It's a way to make sure every member of the community is represented at all times.