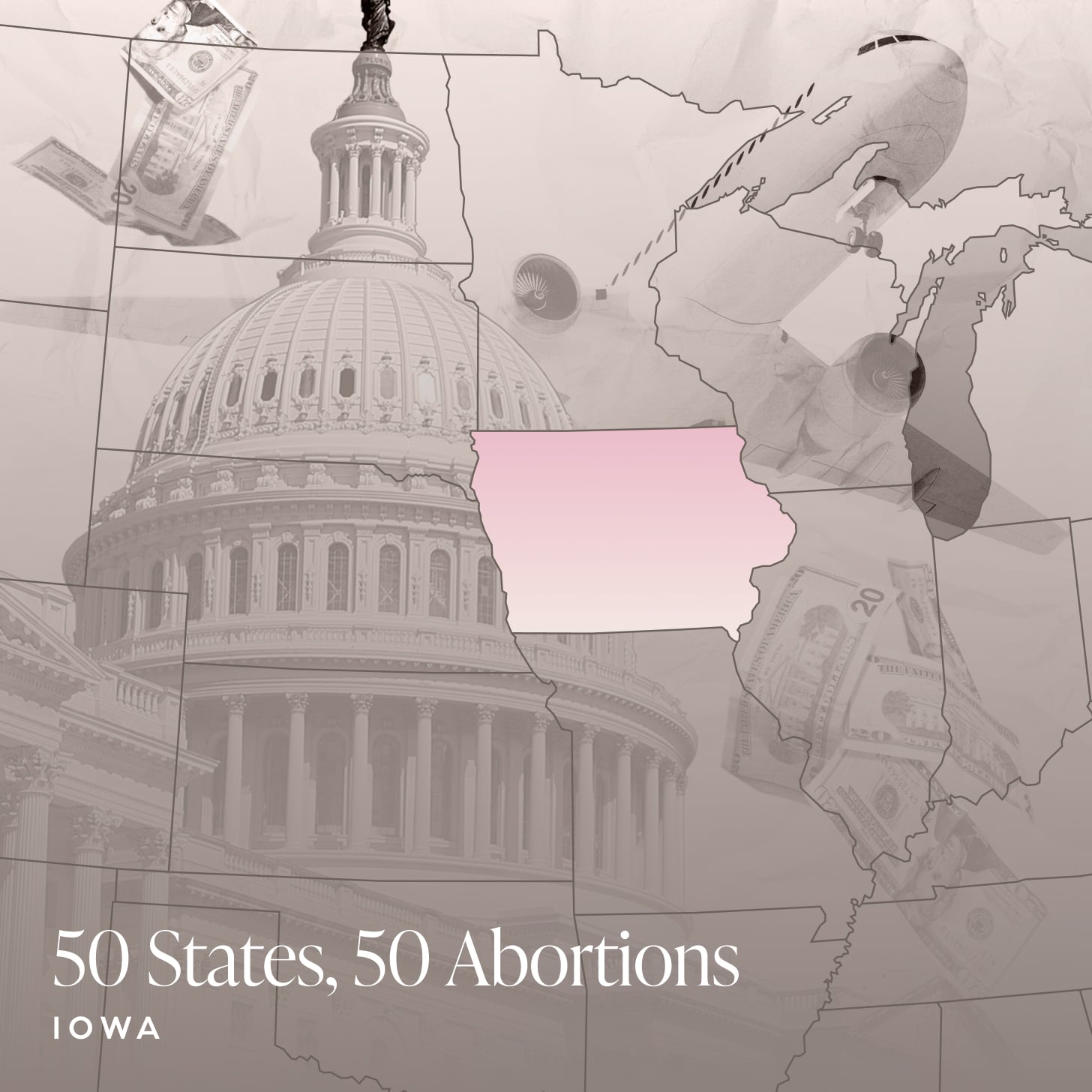 I was 16 and on birth-control pills at the time, but my period was late, and I noticed that my breasts were really tender — the water in the shower and just putting my bra on and taking it off were really intense. I went to Planned Parenthood to take a pregnancy test.

When we got the results back, my friend and I just froze and stared at each other. I would say it was an extreme sensory overload, just completely shutting down. Frantic, chaotic sensory overload.

I had every intention of going through with the pregnancy and raising the baby, because I was raised Catholic and pro-life. But my mom told me she and my dad wouldn't have anything to do with raising the baby or supporting me in any way, and I knew that would be crucial. I wasn't sure how I felt about adoption, and I knew that my relationship with my boyfriend at the time was extremely unhealthy. When I brought up abortion to him, he actually said he'd been hoping I would do that all along. I knew at that point that I didn't have the support of my parents or my boyfriend to raise a child, so I felt extremely isolated. I realized I didn't have the capacity, the resources, and the ability to take this on right now. And there was this voice in the back of my head, thinking of my future.

My mom asked me if I was considering an abortion, and if I'd thought of things like college. I said I had thought about abortion, briefly, and right away she took on the role of coordinating it. Within hours, I had an appointment scheduled. She gathered the funds, helped me take time away from school, made sure there was money for pain medication and prescriptions afterward, and gave me a ride to and from the clinic.

We lived in Des Moines, and we went to a clinic outside the city. I remember getting patted down and metal wanded by a security guard, and I think we had to hand over our phones. I went alone. I believe they wouldn't allow my mom back in the room with me. A nurse came and asked me several times if someone was forcing me to do this and if I was safe, and then I got an ultrasound. The tech asked me if I wanted to see the ultrasound, and I declined. Then she asked me, "I can tell you today if you're having twins. Do you want to know if you're having twins?" The crazy thing is that I am a twin, and twins are extremely common in my family. I declined, but for years, in the back of my mind, I've wondered if I was pregnant with twins.

From a physical standpoint, the abortion was really simple. I had a medication abortion, so I took one pill of the first medication at the clinic, then I took several pills of the second medication afterward when I got home, and my body started releasing the tissue. I stayed at home, my mom made me cozy food, and I stayed in bed.

Emotionally, the moment my mom and I walked out of the clinic, I had this sense of calmness and relief: I'm going to be OK; I'm going to be safe now. I understood the freedom I now had to be away from my boyfriend. The sun was shining, and I just let it wash over me.

Later, it did get hard for me because I grew up in a structured environment that shamed abortion. What was really painful for me was the shame and the stigma and how silenced I was. My family was very much so, "Do not speak of this, do not talk about it, this is not something you say out loud." I was told to lie to people that I'd had a miscarriage, because miscarriage is much more socially acceptable than an abortion.

And frankly, I really isolated myself — and I could see that the gravity of what I was going through, my other 16-year-old friends weren't really mentally, emotionally, and spiritually able to hold space for me. It was a lot for them as well. So I fell into a really deep depression.

I stopped going to high school for several months, and when I did go back, a vice principal told me I had to drop out because I'd missed too much school. I started crying and told him everything, and he was able to work with my mom to get me into an alternative high school.

Shortly after that, a friend called and told me I had to get out of bed. She said, "I'm driving to your house. I just need you to get your ass out of bed. I will be there in 10 minutes." And her just telling me that changed everything. I really physically needed someone to pull me out of my depression.

If I could change anything about that time, I would've broken up with that guy a lot sooner. I would've been more open with the people in my life about what I'd been through and what I needed for support. I would've connected with the abortion community and gotten involved in advocacy and shared my story sooner. I'm getting much more vocal about it after the Roe v. Wade reversal, but there's still this underlying shame and stigma. I'm 27 now, and my dad still doesn't know I had an abortion.

So many people in power have been chipping away at reproductive rights for so long, it didn't surprise me to hear about the reversal. There was just this general sense of numbness almost, where I found myself just staring blankly, thinking of my life, and what if I [hadn't been] able to have an abortion? And that really scares me for my physical safety of what my life would be like now.

Thank God abortion was legal. Thank God I had an abortion. Thank God my abortion unlocked so many doors in my mind and my soul, my spirit, my body. That I found autonomy in my life and my relationships. And I truly found freedom in my abortion.

If you or someone you know is struggling with depression, the National Alliance on Mental Illness has resources available including a helpline at 1-800-950-NAMI (6424). You can also dial 988, the nation's new mental health crisis hotline.