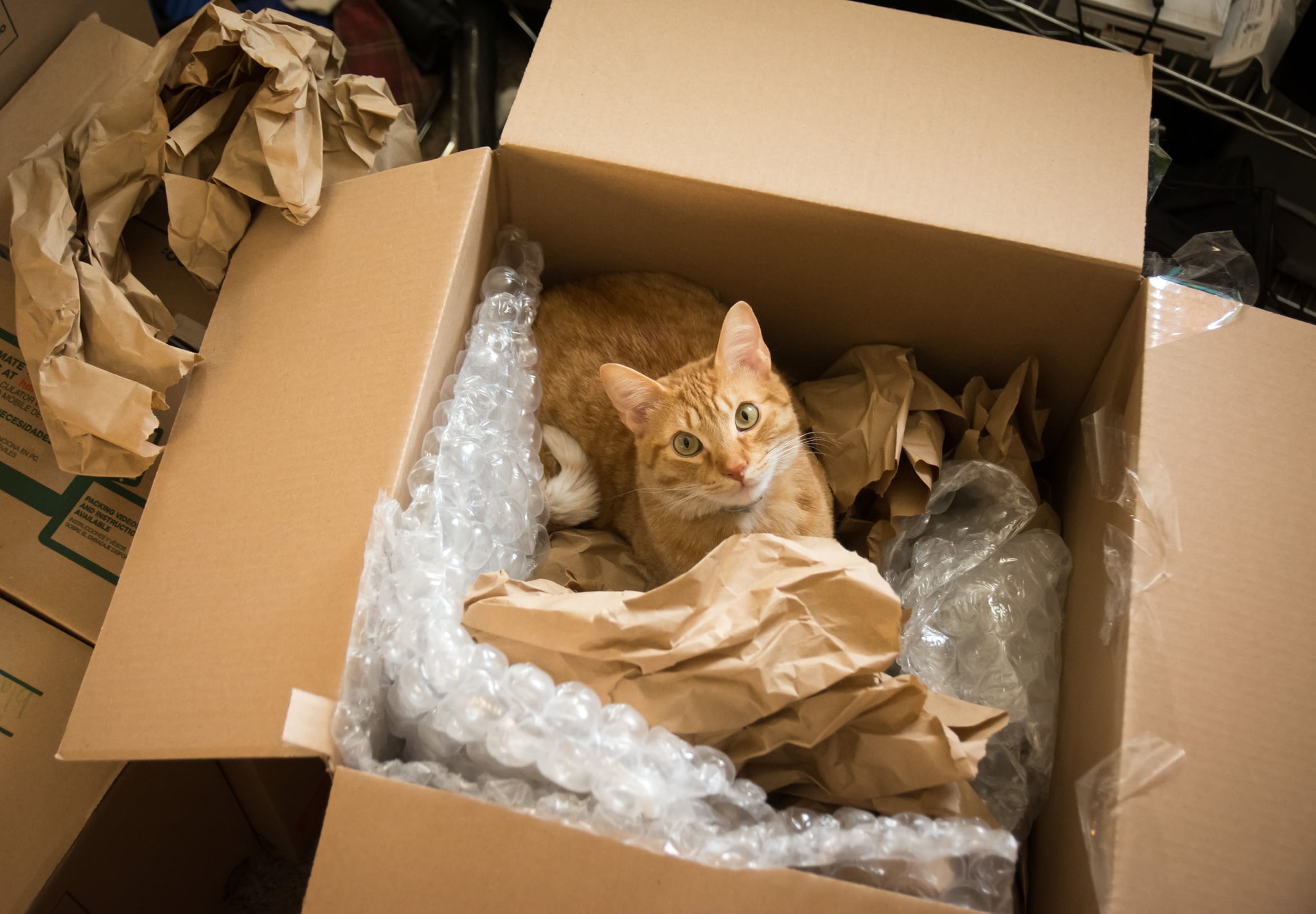 Whether moving for school, a job, or just because, it's an endeavor. Between the finding a place, packing, and getting it all to the new location, there's a lot to manage — you're uprooting your home over multiple days of hard work! While moving can greatly disrupt your life, it can also impact your cat's health and well-being. To help answer your questions and ease your concerns during an already stressful time, POPSUGAR spoke with two veterinarians about what you should know.

Related:
According to Vets, Your Cat's Ears Can Go Back For Any Number of Reasons Besides Fear

Does Moving Affect My Cat's Health and Well-Being?

Cheri Wilhelm, DVM, explained that cats are similar to many people in that they prefer stability. "When daily activities are predictable, life makes more sense," she said. "Moving typically brings an abundance of changes that occur all at once and cats are not able to sift through the long-term pros and cons of the temporary turmoil." As far as how long the effects will last, she said it depends on the cat. "Some cats are seemingly settled within a week and others may take several months to behave as they did prior to moving," Dr. Wilhelm told POPSUGAR.

Why Does Moving Affect My Cat's Health and Well-Being?

Dr. Wilhelm noted that cats' wellbeing may change due to anxiety they're feeling. "Anxiety during a move can arise from many things: Sensing that the people in the family are more anxious and have less time for the cat, from finding that food stations or favorite hiding places are relocated, from seeing a moving crew in the house, et cetera. If cats are being moved either by car or plane, this is very stressful as well," she said. She added that cats may struggle even after the move since they're in a whole new place. "There may be very different views looking out the windows of a new neighborhood, higher traffic, greater number of dogs, other cats, or wildlife around. If the cat is used to spending time outdoors, these threats and uncertainties may be amplified," she said.

How Can I Make My Move Easier on My Cat?

"Keep the cat's routine as normal as possible. Find time to play and interact with him or her. Use familiar bedding in pet carriers when transporting your cat," Dr. Wilhelm said. "Use a synthetic pheromone such as Feliway on bedding and toys during the moving process. This mimics natural soothing pheromones that are calming. Some cats may need prescription anxiolytic medications short term to help fear or nausea during travel or with the adjustment of their new surroundings."

Dan Suggs, DVM, agrees, and adds, "This is not the time to also redecorate your cat's accessories." Some cats may require a mild sedative to make it through the move, Dr. Suggs says, "Initially they'll need a constant drug dosage, then they can possibly wean off or even increase dosage if necessary until they're settled."

Related:
Yes, Your Cat's Behavior Will Most Likely Change With Age — 2 Vets Explain Why

How Can I Best Support My Cat If They're Struggling During a Move?

Both Dr. Wilhelm and Dr. Suggs encouraged maintaining as much stability and familiarity as possible with your cat(s). "Don't overload the pet by having lots of people or other pets over to visit, especially if it becomes obvious that your pet will take a while to adjust. If your cat is hiding often, coax them out with tasty treats or offer a toy versus forcibly moving them," Dr. Wilhelm said. "Place the litter boxes in easy to access areas that are free from high foot traffic or noise to promote consistent usage in the new home. Keep them scooped daily. Cats generally feel more safe when they are up high, so providing a high perch can be beneficial. From there, they can scope out their new territory and hopefully learn that this new normal is not so scary after all."

At What Point Should I Take My Cat to the Vet After a Move?

According to Dr. Wilhelm, you shouldn't wait long to take your cat to the vet if you see any worrisome behaviors. "Your cat should visit a veterinarian if they are not eating within three days, not drinking within one day, have vomiting over 24 hours, have signs of bladder inflammation (in/out of litter box often, straining, or urinating in inappropriate places), or are exhibiting excessive fear (hiding for prolonged periods of time) or aggression towards people or other pets in the house," she said.