So many people adopted kittens and puppies to stay sane during 2020 that many local animal shelters actually ran out of pets, and breeders had wait lists that were ridiculously long. Though I wasn't actually allowed a cat or a dog, I was feeling the social isolation many of us were feeling, and decided I needed a pet of some sort. So I adopted a corn snake.

In March of last year, I was finally living in a house where I was allowed to have a pet snake. It's something I had dreamed of since I was 11 years old. After looking at ads on Craigslist, I found someone who was rehoming their corn snake. Instantly, I replied saying I was interested, and they agreed to sell her to me. This was it! I was finally going to have a new friend to hang out with at home and fulfill my dreams of having a pet snake. They were only a short drive away, so I folded down the seats of my car and drove over to their house to pick her up.

When I saw her, I was already in love. She came out of her rock and flicked her tongue at me when I crouched beside her tank. It was a pretty heavy glass tank, about 5 feet by 2 feet, so her previous owner helped me carry it to my car. Luckily, I had a hatchback, so her tank fit perfectly. I tossed a blanket over top and brought my new snake friend on the highway and then home. She was an 8-year-old corn snake and they called her Alexandria, or Lexi for short. It was a lovely name, but since she was mine, now I renamed her. Now, her name is Lexicon, since I'm a writer. Of course, I still call her Lexi, too.

Related:
Here's What Uncommon Pet You Are, Based on Your Zodiac Sign

Lexicon was all too friendly and excited to see her new home. I intended to wait longer to let her adjust, but clearly, she was curious and extroverted. If I was snake I'd be just like her. I spent the first few weeks eating my meals in the living room while watching her hide in a rock. Sometimes she would pop her head out when I played the ukulele. Other times she would climb around on her favorite stick to get some exercise.

Honestly, she was a pretty boring pet when in the tank, but I still loved watching her. Over time, I gained the courage to take her out and let her play on my bed or wrap herself around my arms or shoulders while I would do laundry or other chores. I've since moved again, and she adapted pretty quickly to our new home. I talk to her about my day and tease her for hiding in dirt and ignoring me. She doesn't do much, but she's more exciting than a fish! Not to mention, she is much lower maintenance. I only feed her once every 10 days and change her water dish every few days. Everyone's first pet should be a snake, in my opinion.

As COVID-19 continues to spread, we're going through another stay-at-home order, I'm relieved I have her for company. She might not be the most conventional pet, but she adorable and friendly which is what matters most. Some friends of mine are scared of her, but most are fascinated and love to handle her. Despite what you might think, she's not slimy at all — if anything she just tickles!

Another perk is that she keeps away people who are judgmental and rude, so she's even helped my dating life! Farewell reptile haters! If you can handle my choice in pet, then you certainly can handle me.

And most importantly, she looks great in hats. 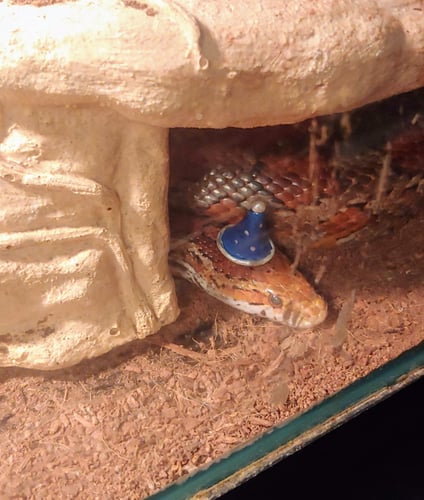