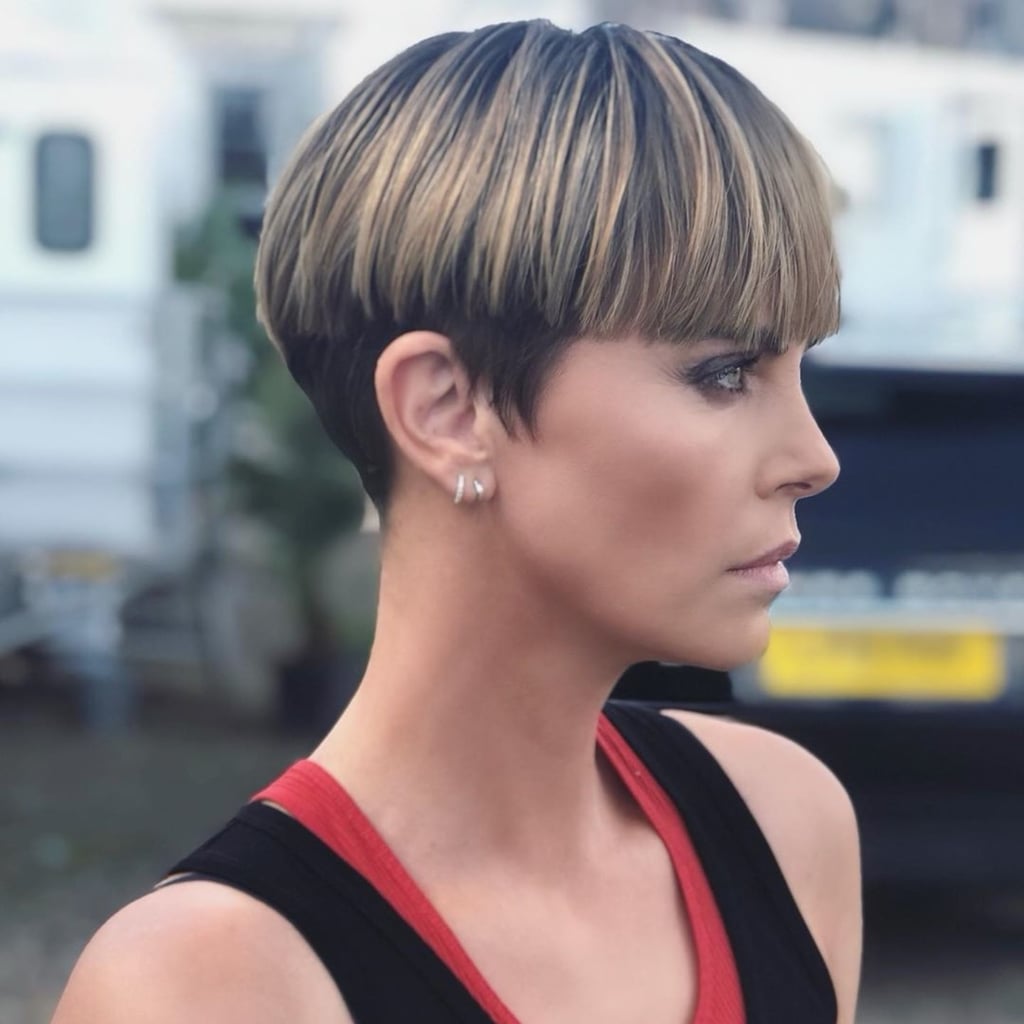 Charlize Theron just debuted a drastic — and damn sexy — hair change. The actor, with the help of hairstylist Adir Abergel and colorist Shannon Gallacher, ditched her brunette lob for an incredibly sexy bowl cut — three words we never thought could coexist in one sentence.

The actor shared a photo of her new bold style on Instagram, captioned "She's baaaaack #Fast9", referencing both her return to short hair — she first cut her hair back in 2013 for the Academy Awards — and the new Fast and Furious 9 movie, which she's currently filming.

The first step to achieving her new hairstyle was actually switching her color from dark brown to ashy blonde, which Gallagher did in just one day. "We used Virtue Labs Colorkick and the Virtue Labs Restorative Treatment Mask ($52) between each step to keep it from getting too damaged," Abergel tells POPSUGAR [Abergel is creative director for Virtue Labs]. Once the color change was complete, Abergel snipped her lob into a bowl cut with the ends just hitting the very tops of her ears. "The ends are mostly one length but they are very slightly textured," says Abergel, adding that this is how to keep the style looking modern versus looking like your middle school crush's yearbook photo circa 1997. He also cut the hair at the back of Theron's head so that it formed a very slight "V". "This keeps the overall look softer," Abergel says. To complete the undercut portion, Abergel enlisted the help of friend and British hairstylist, Jonny Eagland.

And it's not just us who are in awe of her new hairstyle. Theron's celebrity friends are flocking to the comment section of her and Abergel's Instagram feeds to share their admiration for the sexy bowl cut. January Jones wrote what we were all thinking, "This hair is next level good. But would only look good on you 😍" and Tyrese also showed support for the new style, "Damn we missed you!!!!!!!!!!!!", and Lily Collins commented "Love this!!"

Theron's new look certainly isn't the typical celebrity hairstyle switch-up and we absolutely love her for it.

Previous Next Start Slideshow
Charlize TheronCelebrity HairHair
Around The Web

Hair
How to Ease Irritation From Synthetic Hair, From Your Scalp to Your Skin
by Natasha Marsh 2 days ago