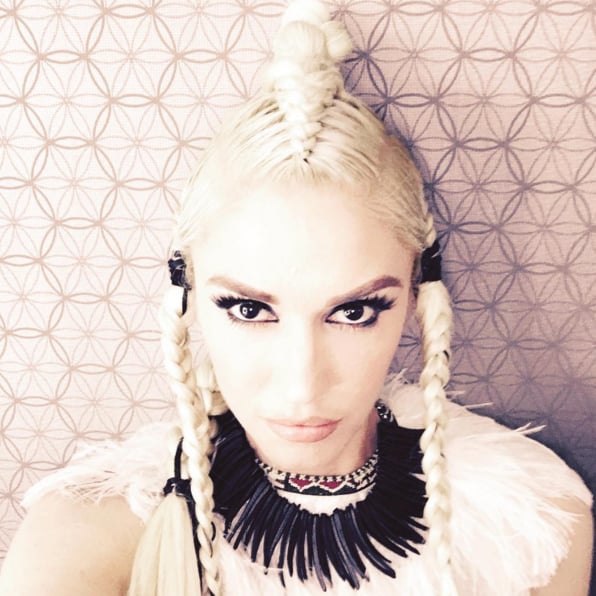 The Internet is pissed at Gwen Stefani right now. On April 19, she returned to the Voice stage to perform her new song, "Misery." As Blake Shelton stared at the stage googly eyed for his girlfriend, viewers at home fumed — specifically those who are part of or advocates for the Native American community. That's because Gwen is being accused of cultural appropriation for the multibraided hairstyle she wore. Her dancers were also dressed in tribal-inspired looks.

You know I had really hoped it was a fluke, that the first image I saw last night was a one off. It's really unfortunate that nothing was learnt [sic] from the video fiasco @gwenstefani. You should, in my opinion, be using your celebrity as a platform and mentoring new artists against cultural appropriation in this day and age. You know the "learn from my mistakes" talk. There's so many other way to be creative than to take very recognizable pieces of other cultures and exploit them. When indigenous cultures get upset it's because our cultures are not costumes or fashion statements. Indigenous cultures get put down or ostracized for wearing what they do - even after someone comes along and makes it "fashionable" and "trendy". Then our centuries old traditions become "celebrity inspired". There is clear Native American inspiration here, and more than one tribe - it's muddled, and inappropriate. The biggest problem I have with all of this is the sexualizing of it all. When this is done it helps to perpetuate harmful sterotypes and helps to fetishize the culture; a culture that is fighting to save our women because there are over 4,000 missing and murdered indigenous women. So, when I see a celebrity who I respect support something harmful and disrespectful to another culture I'm disappointed.

On the flip side, other people claim the style is NBD.

Writes @megan_jkLmao: "I KNEW someone would go and get offended! Lmao gee golly, can't braid our hair, that's offensive, can't wear pink on Wednesday, might offend someone! Lmao just ridiculous."

And @itsjustvee_ adds: "I mean can only French people wear French braids? I think it is beautiful and could bring cultural awareness."

What do you think: Is Gwen just expressing herself or is she politically incorrect?