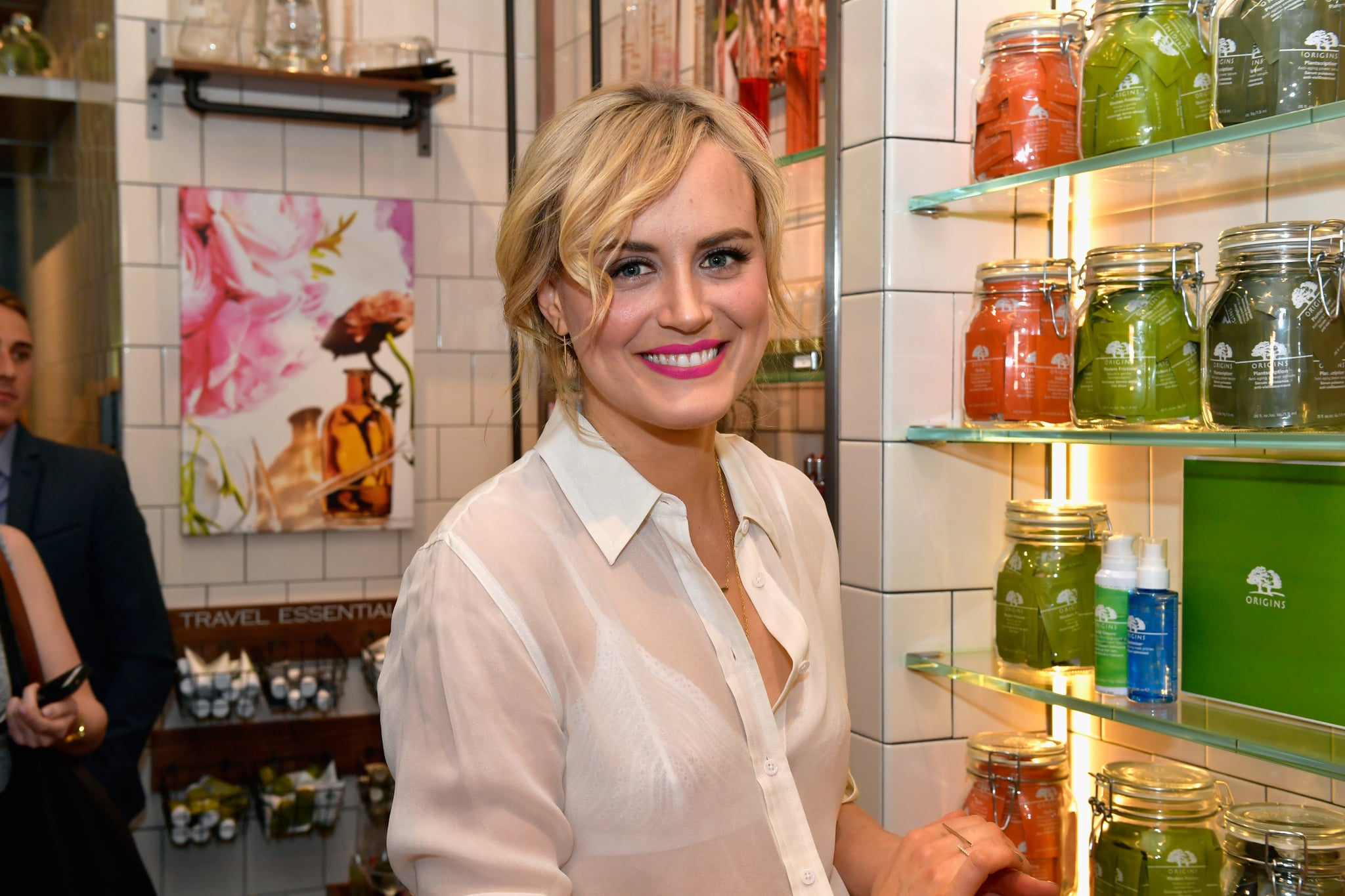 Taylor Schilling is worried about my cold — like, surprisingly worried. When I let her know that I've been battling the same bug for a few days now, she believably and emphatically says, "Oh no . . . That's the worst!" We go back and forth about this for quite some time until I realize that we're actually meant to be talking about her ongoing partnership with Origins.

That's the thing about Schilling — or at least what I gathered from my momentary interaction with her — she's so laid-back, mellow, and considerably candid that you actually forget she simultaneously plays Piper Chapman in Netflix's hugely successful original series Orange Is the New Black, now going into its fourth season.

When I spoke to Schilling on the phone, she was back in her hometown of Boston to celebrate the reopening of the first freestanding Origins store in Harvard Square. One look at her Instagram and you'll probably gather that she's a lover of the outdoors. She frequently documents her hikes and adventurous trips with her fellow castmates — like when they all toured the Na Pali Coast State Park in Hawaii. (Of the experience she said, "Those girls are some of my best friends. It was very special.") This aspect of her personality factors into her role as brand ambassador for Origins, a brand that prides itself on its natural formulas and just recently planted trees for every selfie posted with the hashtag #KissThePlanet.

Apart from her relationship with Origins, we spoke about achieving her character's no-makeup makeup look, the usefulness of makeup in prisons, and Piper's uncertain fate in this upcoming season.

POPSUGAR: You seem to be a pretty environmentally conscious person. Does that factor into your partnership with Origins?
Taylor Schilling: For sure. I like the idea that I can feel confident that the products I'm using aren't harming the planet — that they're good for me and they're good for the environment. I was so thrilled to be able to help out with their Kiss the Planet campaign. Every time a selfie was posted with the hashtag #KissThePlanet, Origins planted a tree for Earth Day. I really think it's so important and special when a company decides to put their beliefs into action.

Quite thrilled to partner with @OriginsUSA to plant trees for Earth Month! Pucker up, give Mother Nature a 💋 and share your smooching selfie, tagging @OriginsUSA, #KissThePlanet and #DoGoodCampaign. For each kiss shared, Origins will plant a tree!!! This is really good stuff. Here I am canoodling with a beautiful blossom #ambassador

PS: Pivoting to Orange Is the New Black, what is the process like for achieving your character's no-makeup makeup look?
TS: There's not much involved. We go to work and the biggest prep you can get is whether you slept or not the night before. That's kind of the measure of how good you're going to look in prison that day. There's not a ton that the makeup department can do to enhance what you've got going on.

PS: So they don't apply any additional products?
TS: They do. They'll use foundation to even out skin tone and maintain continuity. In those ways, makeup is very important, but it's not really used on the show to enhance beauty. That's not the point, really, of any of these characters. It's used to maintain the canvas of what is already there.

PS: How realistic are the beauty routines of the characters on the show compared to actual prisoners' beauty routines?
TS: In prison, beauty routines are really one of the only expressions a woman has of her own individuality and her own creativity. So makeup, cosmetics, and hair are really utilized as forms of self-expression.

PS: If you could switch makeup looks with any of your fellow castmates, who would it be? For example, Flaca's teardrop eyeliner, Red's lipstick . . .
TS: I'm a fan of Morello's red lips. I'd snag those. She always looks very good.

PS: You can stop me if I'm looking too deeply into this, but I've been thinking a lot about the evolution of Piper's hair. In flashbacks preprison, she's shown with really long locks, then when she arrives at the prison she wears her shoulder-length hair down usually, and then in the previews for this season it's frequently pulled back. I wonder if there's some sort of symbolic meaning behind that gradual change.
TS: Oh, yeah. I don't think that's reading into anything. That's so spot on. Piper's outsides are becoming less and less important. She's kind of moving further and further away from the idea of what she thought she was. She's becoming more practical. She's becoming a creature of the prison, and there's no space for excess. Her only need is for survival, and brushing her hair doesn't really factor into the equation.

PS: In the last season we do see her spiral into becoming a total gangster with her whole underwear operation. For this next season, I'm honestly a little concerned for Piper. It doesn't look too good for her from what I've seen.
TS: Yeah, this is a tough year for Piper.

PS: In one of the photos for the upcoming season, it seems as though she's about to get her hand smashed?
TS: No — you'll see.