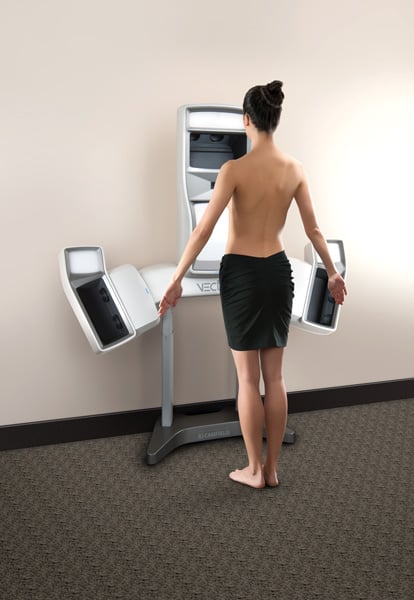 People considering plastic surgery often arrive to their initial consultations armed with pictures of the celebrity body parts they aspire to emulate: Kate Middleton's nose! Sofia Vergara's breasts! Halle Berry's chin! And doctors, aiming to manage expectations, are usually prepared with their own photos of successful results from surgeries they've performed. These pictures can be a helpful but imprecise tool when it comes to schooling potential patients on the kinds of results they can realistically expect to achieve. The big problem with this method? None of those photographs — neither the red carpet snaps patients rip from magazines nor the post-op photos taken in the surgeon's office — are of the patient herself.

This is exactly the problem a relatively new tool called the VECTRA XT 3D Imaging System attempts to solve. The device, which resembles a space-age teleportation machine, creates hyperrealistic 3D models of patients' bodies. A person simply stands in front of the tool, which takes six 2D photographs with six cameras simultaneously. The system also takes precise measurements — including of any asymmetries — to almost instantly generate a 3D model of the body. The resulting image is so high-definition, a doctor can see every freckle and pore if he or she zooms in.

Doctors can then show the patient what they would look like with different sizes and types of implants — the tool adjusts for the thickness of a patient's skin and the effect of gravity — to provide a surprisingly canny preview of the post-op results. It even offers a mini wardrobe of virtual lingerie and clothes, including a leopard-print bikini top, so patients can get a sense of what their new bodies might look like in clothing. (As you can see, the wardrobe options still have a little ways to go to be as hyperrealistic as the body imaging itself.) 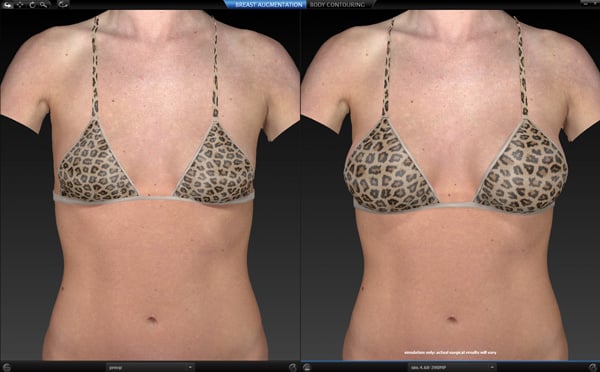 Product Director Dennis O'Neal of Canfield Scientific Inc. — which developed the VECTRA — says the system can pull up every saline and silicone breast implant on the market for a patient to virtually "try on."

"We're using those 3D models, and inserting them into a 3D model of the body," he says, "and we're altering it the same way the implant would be altered."

O'Neal adds that there are also tools that allow surgeons to walk patients through the intricacies of the surgery itself. "We also have a module that will do breast lifts. That's actually done in the software using the 3D images, just like it's done in surgery. They'll actually cut out the sections of the skin, which is pulled together and sewn, to cause the lifting of the breast. It's a very good educational value to the patient."

When the first VECTRA system was first launched in 2009, it could only be used for breast augmentation consultations. Today, surgeons can use different optional modules in conjunction with the tool to help patients seeking the aforementioned breast lift, rhinoplasty, chin augmentation, and even liposuction. A more recently released product, the VECTRA H1, is a handheld camera that merges three photos from three angles to take images of the face. O'Neal says the device has been helpful for a wider range of surgical uses. "We've seen them used in hospitals or taken overseas to third-world countries [to treat] babies with cleft lip," he notes. "It's the same technology, but in a portable way." 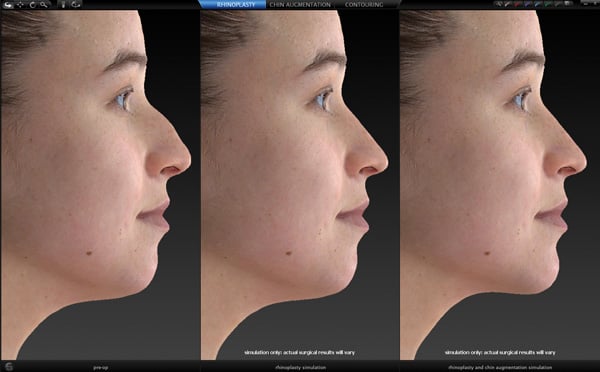 Dr. John Diaz, a Beverly Hills plastic surgeon, has one of some 1,500 VECTRA devices being used in the United States. Diaz says he is currently working on a paper for medical publication The Plastic and Reconstructive Surgery Journal that shares his findings on his patients' satisfaction with the VECTRA XT 3D system, and says the scores he has documented over a three-year span are higher than any scores published in a medical journal before. The median patient satisfaction rate he claims he's recorded since he started utilizing the system? One hundred percent.

The very invention of the VECTRA system, along with Diaz's study, points to a broader trend in medicine: a newfound focus on patient experience and satisfaction. Most measurements of the somewhat fuzzy concept of "patient experience" include confidence that a medical provider can deliver on his or her promises. 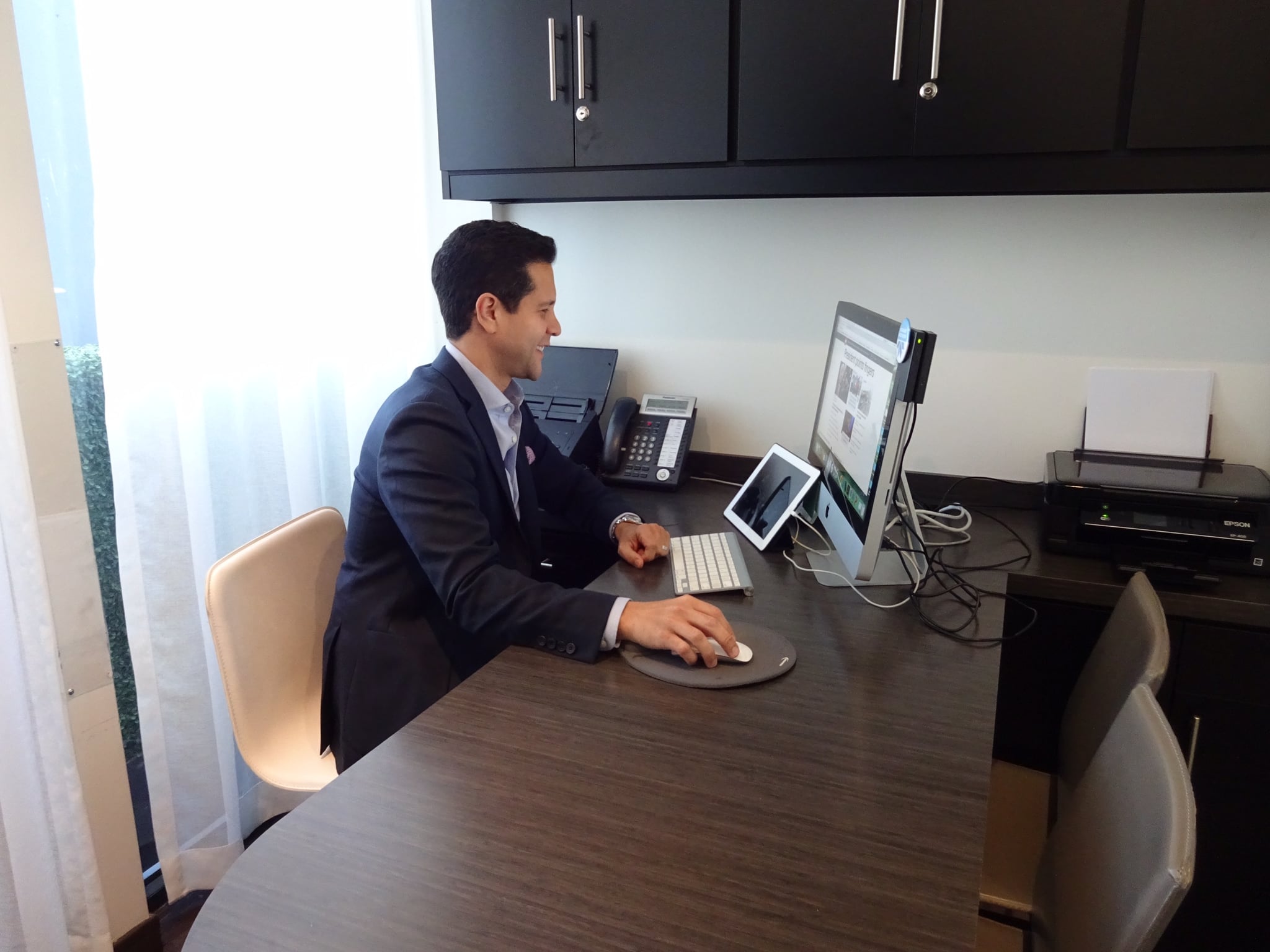 "The biggest fear people have about plastic surgery is not knowing what they're going to look like," Diaz told POPSUGAR. "And this eliminates that fear."

Hannah*, a 23-year-old LA-based model who had a breast augmentation performed by Diaz earlier this year, says she wasn't sold on going forward with surgery when she had her first consultation. She was seeking a smaller, natural-looking result and had some hesitations. "It was scary to me," she told POPSUGAR. "It was a big change to make. But when I could see on the imaging system how it would fit my frame, I was like, 'Oh, that looks good!' And to be honest, I think it came out even better than it looked on the imaging system."

There are other, more low-tech ways surgeons have tried to help guide patient expectations in the past. Many doctors gave women seeking breast augmentation rice bags to wear in their bras in advance of surgery, aiming to help give them an idea of the size and feel of their new breasts. But it was a flawed method — not only did the bags feel heavy and awkward to wear, but they didn't really approximate the real look and feel of implants, which don't feel as weighty or look as pronounced once they're inserted under skin and muscle. (Of course, the VECTRA is similarly unable to help a patient gain a real understanding of what their surgery results will actually feel like.)

Diaz says another upside to the VECTRA system is that it makes surgery itself more efficient and precise. Since asymmetries in the body are often exceedingly subtle and they can't always be detected just by sight. Diaz says this often means doctors undergo trial by error in the operating room.

"[Doctors] are still coming in with a pile of implants, and they don't know which ones are going to help the asymmetries . . . . There are implants that are designed to size in the operating room," he says. "And they're literally popping in and out these sizes, trying different sizes, and judging by sight. Frankly, I don't care how great of a surgeon you are, you're never going to be as accurate as this machine."

Because the VECTRA provides such specific measurements that spell out the volume differences — and even nipple asymmetries — between each of a patient's breasts, he says he goes into surgery more prepared than ever. "If I go in the operating room and the computer predicted that [the patient] is going to need 70 ccs more on one side than the other, I'm already prepared with that implant," he said.

Of course, Diaz admits, there is a downside to the technology: sometimes patients with outsize expectations aren't pleased with the realistic results Diaz shows them on the VECTRA system and choose to undergo surgery with another doctor. In that case, Diaz says, he often sees them again for revision surgery. "It's a common pitfall," he admits. "They'll go with the surgeon who shows them what they want to see."

At least, the first time around.

*Hannah's last name has been excluded to protect her privacy.

Healthy Living
If Your Mind Won't Shut Off at Night, This New Sleep App Will Help You Relax and Sleep Better
by Tamara Pridgett 19 hours ago

Beauty Interview
Dr. Michelle Lee Talks Dr. 90210 and the Challenges of Being a Female Surgeon
by Danielle Jackson 23 hours ago

Lizzo
Lizzo Doesn't Want to Be Associated With the Body-Positive Movement: "Being Fat Is Normal"
by Samantha Brodsky 2 hours ago