When you want the best smile in Hollywood, you head to Dr. William Dorfman, DDS. Dr. Bill (AACD member dentist) is the man behind some of Hollywood's most famous smiles — his clients include everyone from Usher to Katy Perry and Britney Spears to Jessica Simpson.

Dr. Bill founded Discus Dental, the company that launched Zoom Whitening before being sold to Philips. So when I wanted to see what the professional teeth-whitening hype was about, I knew he was the go-to authority.

I went in for my consult, and Dr. Dorfman not only said I was a great candidate for Zoom (although my teeth were fairly white from white strips), but that I would also benefit from another cosmetic adjustment. "Your front two teeth are uneven — one is longer than the other, and one is chipped and jagged. Let me fix that." It was something I've always noticed but never worried about, but I decided to let him work his magic.

Before I hopped into the chair (well, I was already sitting there, just not getting the service yet), I had to know why this was so much better than my at-home white strips, and I had a myriad of other questions, too.

First things first: does it hurt?
No, it doesn't hurt. Not while you're getting it done, at least. There was a slight sensation during the third 15-minute session that dissipated, but nothing hurts while the light is on your teeth.

However, the pain I experienced that night was excruciating. I would randomly feel deep aches and sensations throughout my teeth and gums. I ended up popping two Ibuprofen and going to bed earlier than normal. By the next morning, the pain had completely subsided. 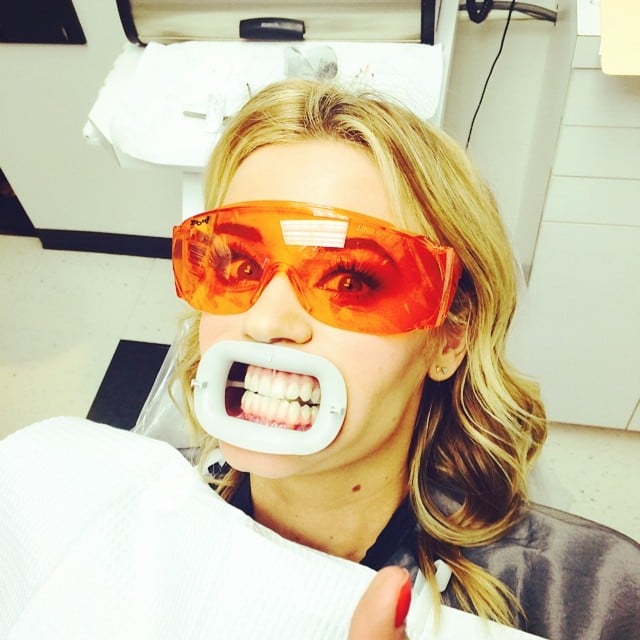 How long does it take?
Each appointment is around 45 minutes to an hour. I had my mouth fitted for personalized take-home whitening trays, then they applied protective gel on my teeth and lips, and then put the light on my teeth for 15 minutes at a time. In between each session, they wiped the gel off and reapplied. You'll go through this process for three 15-minute sessions, then rinse, and you're out the door!

How long does it last?
Depending on your eating and drinking habits, it can last anywhere between six months and a year.

How do I maintain it?
Because I got fitted for the accompanying take-home trays (an optional service), I'll use those to help eliminate any stains from my new pearly whites. There are a few options depending on your needs, but I chose NiteWhite. I'll wear the formula in the trays overnight, two to three days a month, whenever I need a little sprucing up. (I haven't needed it yet; it's been about three weeks.)

Of course, drinking coffee, red wine (God forbid!), or certain juices and consuming balsamic vinegar can stain your teeth over time, and you're advised against consuming any of these items for 48 hours after your appointment. I was so nervous about staining my teeth that I joked about the teeth whitening diet:

Zoom Whitening Diet: don't eat/drink anything (besides water) because you're scared everything will stain your teeth

And Dr. Dorfman shaved down my two front teeth so they were even. He got rid of the jagged edges and chips that I've incurred over time from grinding my teeth at night. After sending her a photo of the results, my mom told me she might cry. That's powerful stuff, y'all.

OK, but seriously: Is it worth it?
As a woman who wants her teeth to look white at all times, I definitely think it's worth it. Pricing varies around the country, but for a couple hundred dollars, your teeth can get up to eight shades brighter than they were originally, and it really does make a huge difference. I've gotten so many compliments on my teeth the past few weeks, and I've even gotten asked if I have veneers. (I love it!) I don't know that I would do it every six months, but once a year is worth it for me. The white strips I use at home work, just not as powerfully as this service.

Further, the cosmetic shaving made an even bigger difference, and getting both services at the same time was the one-two punch I needed to take my smile to the next level. Now if I can just get rid of my affinity for red sangria . . .

You can see the whole transformation in the video, and watch what happens during the process. Based on my reaction, you can tell I'm very pleased with the results!

Daniel Kaluuya
Daniel Kaluuya Explains Crying on Cue on "Hot Ones": "That's When Hot Sauce Could Come In"
by Njera Perkins 3 weeks ago