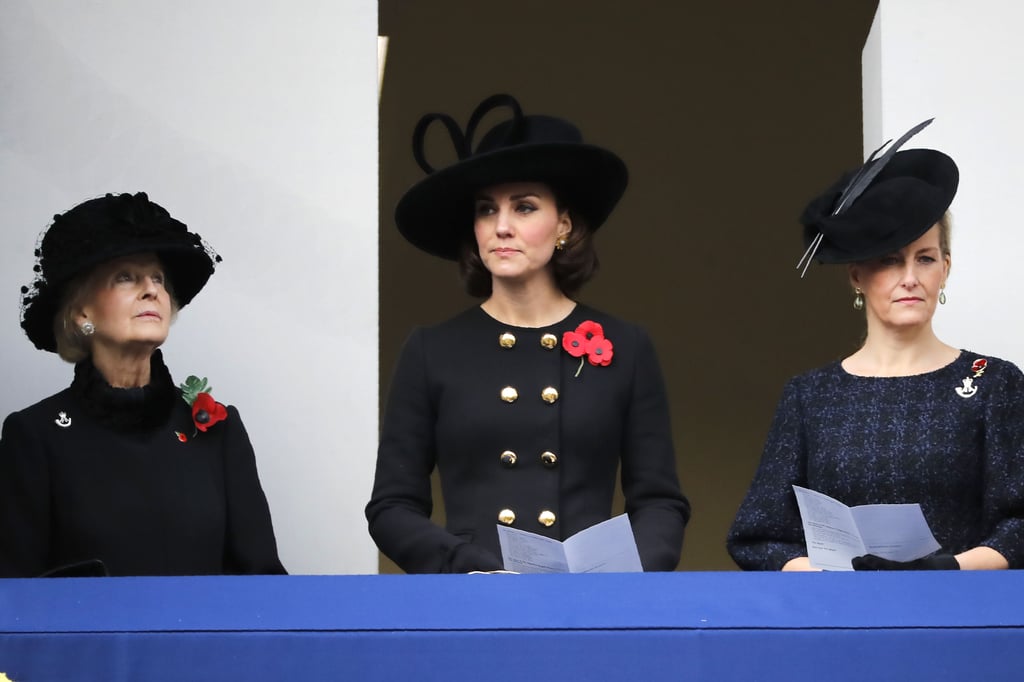 Kate Middleton, Prince William, and Prince Harry all paid their respects at the annual Remembrance Sunday service in London over the weekend. Kate, who is currently pregnant with her third child, donned a faux bob and a double-breasted Dolce & Gabbana coat for the somber event, and William and Harry suited up in their uniforms. Harry and Will both laid wreaths at The Cenotaph at the Whitehall war memorial in honor of soldiers who suffered or died in WWI and WWII, while Kate watched the service from the balcony of the nearby Foreign and Commonwealth Office with Katharine, Duchess of Kent, and Sophie, Countess of Wessex.

Related:
Here Come William, Kate, and Harry! How the Young Royals Have Stepped Up in 2017

The family's outing comes just days after Harry officially opened the Field of Remembrance at Westminster Abbey. The memorial garden honors fallen soldiers, and while there, Harry tried to bring light to somber occasion when a fan questioned him about the whereabouts of girlfriend Meghan Markle. "I took the mickey and asked where his missus was and he said she wasn't here," veteran Matt Weston explained to reporters. "I asked if she would come next time because she's awesome and he said he couldn't hide her anywhere, but I said you wouldn't have to hide her." Meghan is rumored to be moving in with Harry this month, so hopefully we'll get to see them out and about soon.