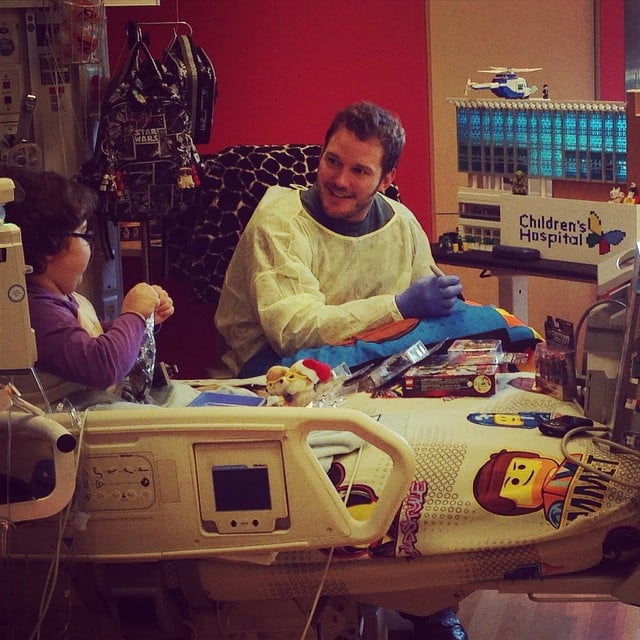 Just when you thought Chris Pratt couldn't be more lovable, he made an adorable hospital visit that is sure to warm your heart. Chris showed up to LA's Children's Hospital dressed as his Guardians of the Galaxy character Star-Lord and met with young patients. The hospital shared its thanks on Twitter, writing, "Star Lord cheered up our patients by sharing #GuardiansOfTheGalaxy! Thanks for making them smile!" Chris was also photographed meeting with 8-year-old Dylan "Lego Kid" Prunty, who is being treated for mitochondrial disease and with the help of the Make-A-Wish foundation recently built his own Lego replica of the Children's Hospital.

It looks like Chris is following through on the promise he made during a July interview with Panzer TV that if Guardians "was a big enough movie to where it would mean something to a kid who's sick in the hospital for Peter Quill or Star-Lord to come visit them, I'll do that. I think that's awesome, man. That would give me real meaning for this movie, you know?" He even planned ahead by stealing "the jacket and some of the wardrobe so that, if this movie comes out and does what everyone hopes it can, I can follow the example of someone — say, like, a Russell Wilson — and go visit kids."

Previous Next Start Slideshow
Chris PrattNewsCelebrity Philanthropy
Around The Web

George Clooney
George and Amal Clooney Pledge $100,000 For Beirut Relief: They "Hope That Others Will Help"
by Monica Sisavat 1 day ago