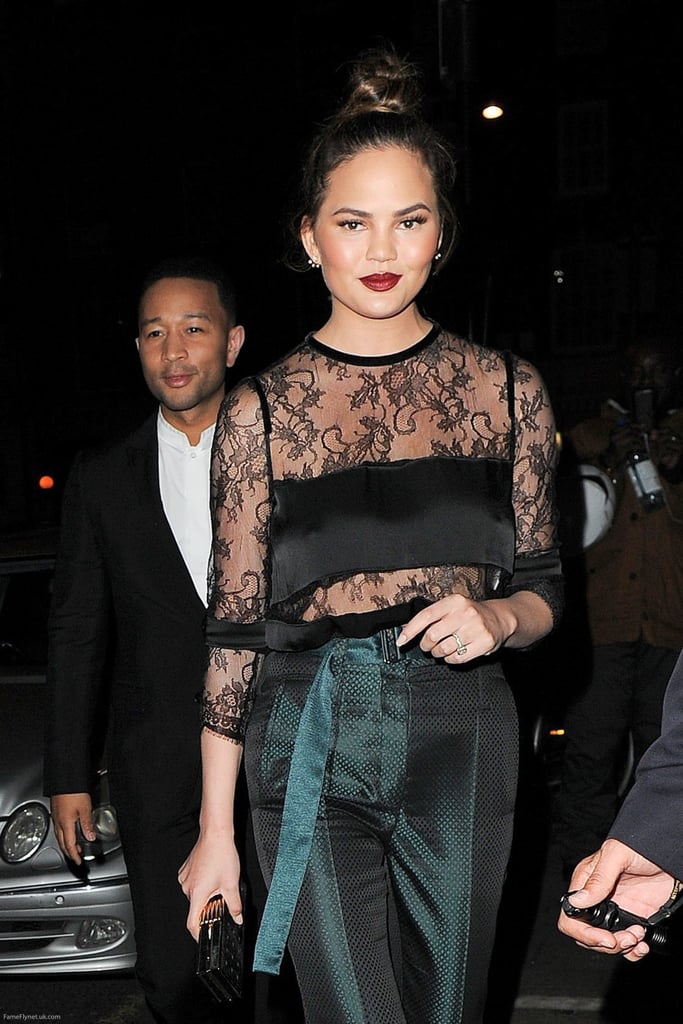 Chrissy Teigen and John Legend are currently overseas, and on Friday, the couple was spotted having a dinner date at Murano restaurant in London. Chrissy practically glowed in a see-through lace blouse complete with emerald green polka-dot pants, while John looked dapper in a black suit. Their latest outing comes just days after Chrissy expertly shut down an internet troll for criticizing the way she held baby Luna. On Wednesday, a Twitter user posted a photo of Chrissy and Luna walking down the street, writing, "@chrissyteigen this is not how a baby is held!!!!" Moments later, the model clapped back, saying, "Really because that's how I'm f*cking holding her." She then replied in another comment, "Photos are literally split-second moments in time that evolve. I despise mommy shamers. I am a proud shamer of mommy shamers."

This isn't the first time Chrissy has been criticized for her parenting choices. Back in May, commenters came down on her for going out to dinner with her husband less than a month after baby Luna was born, to which Chrissy responded by sharing a screenshot of her mentions and saying, "I went to dinner. People are pissed. Good morning!" John also chimed in and defended his wife, writing, "Funny there's no dad-shaming. When both of us go out to dinner, shame both of us so Chrissy doesn't have to take it all. We'll split it." Just another reason to love these two, right?

Celebrity News
Chrishell Stause Calls Out PCAs For Not Allowing Her to Bring G Flip: "I Was Fighting to Get Them In"
by Njera Perkins 18 hours ago

The Royals
Prince Harry Jokes About His and Meghan Markle's NYC "Date Night": "We Don't Get Out Much"
by Noelle Devoe 19 hours ago