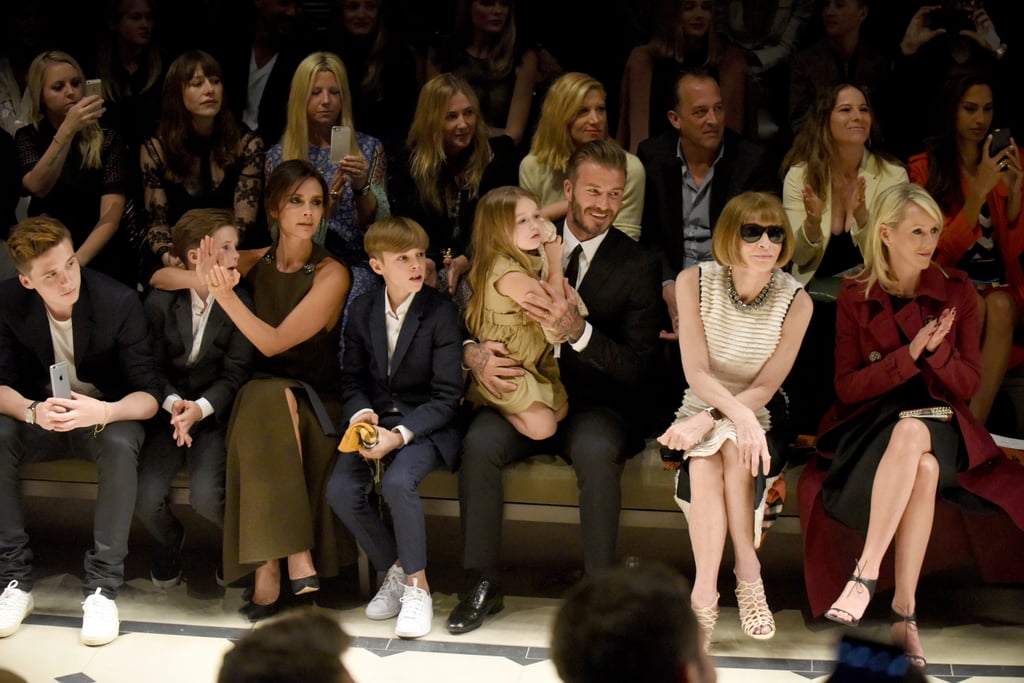 What Fashion Show? The Beckhams Steal the Spotlight From Burberry's Front Row

The entire Beckham family was on hand for Burberry's London in Los Angeles event at the Griffith Observatory on Thursday night. Even though there was lots of spectacular fashion to behold — including a runway show that featured Naomi Campbell, Jourdan Dunn, and The Late Late Show host James Corden — the Beckhams easily grabbed all the attention with their presence at the party. The crew was decked out in designs from the iconic British brand as they sat front row for the festivities; Victoria kept her arm around middle son Romeo while David held little Harper in his lap next to Vogue editor Anna Wintour — how adorable is her tiny Burberry trench dress? Brooklyn, 16, who has become a bit of a star in his own right, took the opportunity to snap photos with some of the party's high-profile guests for his Instagram fans. He posed with Ryan Seacrest, Burberry designer Christopher Bailey, and his godfather, Elton John, and even enlisted his mom to take a photo of him with model Cara Delevingne. The event also brought out Kate Beckinsale, a solo Mila Kunis, and Jaime King, who showed off her growing baby bump in a sexy, sheer dress.

The Beckhams' night out came right before a big milestone for Victoria; the designer and former Spice Girl rings in her 41st birthday on Friday and commemorated the occasion by sharing a sweet collage of photos on social media. We're celebrating with roundups of Victoria's impressive style evolution and an homage to her signature pout. Keep reading to see all the cute photos from the Beckham family's night out with Burberry.