Millie Bobby Brown continued to prove she's cooler than most of us when she met Drake at his concert in Australia on Friday. Millie had a backstage pass to hang with the Views rapper and made sure to make the most of her epic night by posing for adorable photos. "this guy... ❤️," she captioned one photo with Drake, who appeared equally smitten with the Stranger Things star. Drake also mimicked Eleven's signature telekinesis stance in another adorable photo he shared on his Instagram. "Hawkins Very Own," he wrote. Does this mean we might see a collaboration between the two in the near future? After watching Millie's glorious Stranger Things rap, we're keeping our fingers crossed. 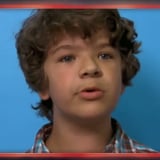 Celebrity Instagrams
James Michael Tyler Dies at 59: Friends "Would Not Have Been the Same" Without Him
by Maggie Ryan 14 hours ago