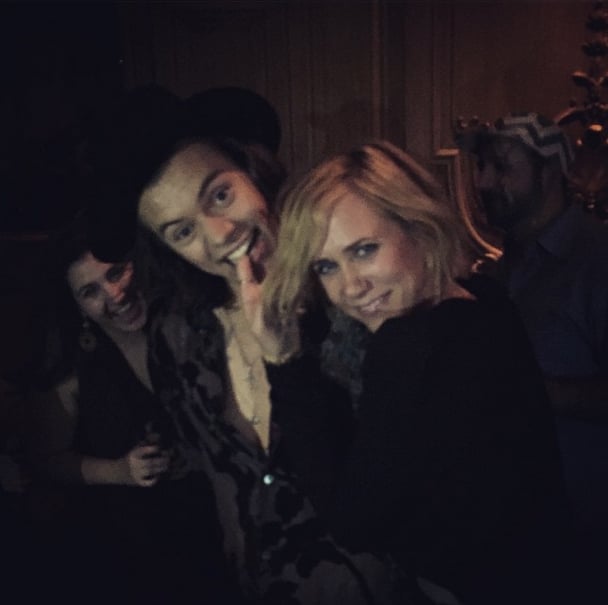 Who knew Harry Styles and Kristen Wiig were such great pals? The stars were spotted having the time of their lives on Saturday night when they danced up a storm at Saturday Night Live's wrap party in NYC. (Harry performed on the show's pre-Christmas episode with One Direction while former cast member Kristen made a surprise appearance.) Harry and Kristen were seen dancing to Bill Medley and Jennifer Warnes's "(I've Had) The Time of My Life," the classic '80s hit made famous by Dirty Dancing. While Harry and Kristen weren't seen trying to re-create the film's climactic dance scene, Harry was seen twirling Kristen around and taking her by the hand for a slow-dance moment on top of a table.

This isn't the first time that the two have had a crossover. Kristen famously "impersonated" Harry during her February appearance on The Tonight Show Starring Jimmy Fallon, where she conducted the entire interview dressed up as the famous British pop star and pretending to be him. Watch another one of the pair's dance videos below.

So the kid from @onedirection and Kristen Wiig got on a table and danced tonight at the SNL after party. So that's a thing.

Storm Reid
Storm Reid Treated Herself to an Inspiring Tattoo For Her 17th Birthday: "I’m So Appreciative"
by Chanel Vargas 4 days ago