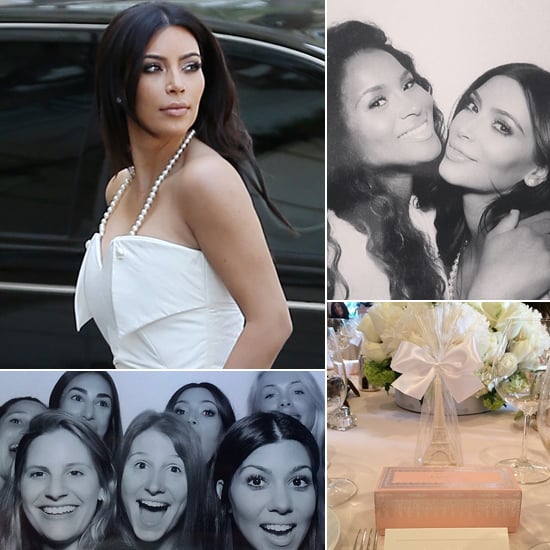 Wedding white ensembles and photo booth smiles were all the rage at Kim Kardashian's bridal shower in LA on Saturday. To celebrate her impending nuptials with Kanye West, the reality star gathered with her nearest and dearest at the posh Peninsula Hotel in Beverly Hills. Before making her entrance inside the party, Kim arrived at the hotel in a white dress adorned with pearl straps and black-and-white stilettos.

The group of women in attendance included Kim's sisters — Kourtney and Khloé Kardashian and Kendall and Kylie Jenner — mom Kris Jenner, and BFFs Ciara and Brittny Gastineau. Kim and the other ladies took to Instagram to share the joyous occasion, posting fun and silly photo booth snaps that featured a custom Kim and Kanye watermark with a heart between their names. Kim's luxe table setting, complete with white roses and white chocolates in the shape of the Eiffel Tower, is on display in one photo.

Despite the picture-perfect results, the party did not go as planned. According to reports, the wedding shower was originally supposed to take place at the Beverly Hills Hotel. E! News on Saturday reported that Kris, Kourtney, and Khloé decided to switch venues after learning that Sultan of Brunei Hassanal Bolkiah, owner of the legendary hotel, has "implemented a law in his country that includes death by stoning of gay people." The Kardashians have in effect joined a long list of celebrities, including Ellen DeGeneres, Jay Leno, and Sharon Osbourne, who are boycotting the hot spot to support LGBT rights.

The gathering comes just one day after Kim and Kanye's wedding invitation was revealed. The parents to North West are set to tie the knot in a lavish wedding in Paris on May 24. Keep reading to go inside Kim's exciting shower, and then check out little-known facts about the bride-to-be that might surprise you!

Fashion News
Is It Hot in Here, or Is It Just Calvin Klein's New Star-Packed Campaign?
by Victoria Messina 1 day ago Kendall Jenner
Kendall Jenner Just Made "Beigefits" a Thing, Thanks to This Amazing Outfit
by Nikita Ramsinghani 3 days ago

Spring Fashion
When Kendall Jenner Wears a Reformation Dress to the Versace Show, You Know It's Up to Par
by Sarah Wasilak 1 week ago

Fashion Designers
Kendall Jenner and Bella Hadid Just Reminded Us: No One Makes a Minidress Like Donatella Versace
by Sarah Wasilak 1 week ago