Guys. When I say I've been waiting for a new routine from the PAC dance team since October, I'm not exaggerating. The students from Walden Grove High School wowed me last year, not only with their viral Harry Potter moves, but with every single performance they gave on America's Got Talent. The team recently returned to the spotlight to compete in the Arizona state championships, and, spoiler alert: they took home the top honor with a PERFECT score. 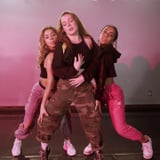 Decked out in their own fraternity-inspired outfits that gave me major Beyoncé at Coachella vibes, they performed to hits like Jennifer Lopez's "Dinero" and Kanye West's "Ghost Town." Prepare yourself to be wowed again, and watch the full routine above. Congrats to the five-time state champions!

Beauty News
What's the 2016 vs. 2021 Makeup Challenge on TikTok? These Looks Will Take You Back
by Danielle Jackson 3/29