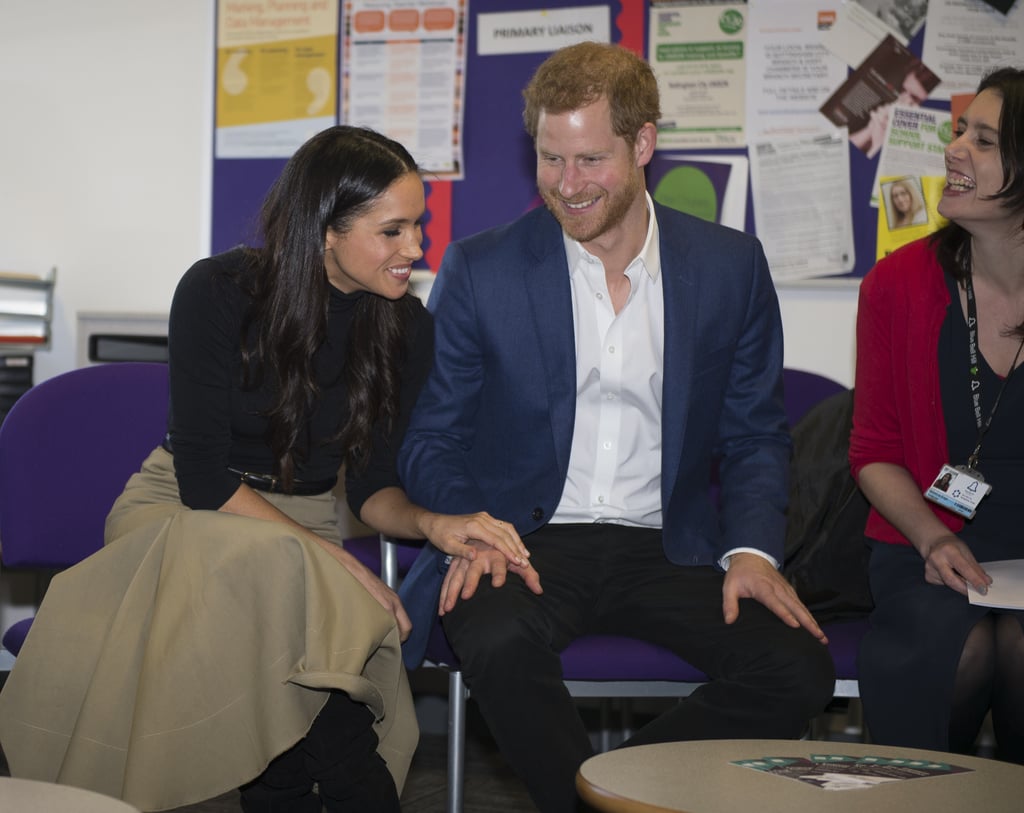 After announcing their engagement on Monday, Prince Harry and his new fiancée, Meghan Markle, wasted no time in getting to work. On Friday morning, they visited Nottingham, England, for their first official appearance together. Kensington Palace tweeted that Harry was "delighted to be introducing the city to Ms. Markle," and she definitely got a warm welcome.

Despite freezing temperatures in the UK, crowds began gathering in the early hours, desperate to catch a glimpse of the happy couple. Harry and Meghan smiled and waved as they greeted the public outside the National Justice Museum, and Meghan gave us another glimpse of her beautiful engagement ring, as she kept cozy in a navy coat and held on to her Strathberry Midi Tote. While greeting the crowd, Harry was asked by a fan what it's like to be with someone like Meghan "as a ginger," to which he jokingly replied, "It's great isn't it? Unbelievable!"

The pair then began the short walk to Nottingham Contemporary, where a Terrence Higgins Trust World AIDS Day charity fair is taking place. They happily chatted with everyone there, and Prince Harry was even gifted with a jersey. Later in the day, they toured more parts of the city, including a trip to see schoolkids at the Nottingham Academy. Harry excitedly shook hands with some of the students, and then the couple watched a kick boxing demonstration. Read on to see highlights from their day!

Video: Hilarious from a red-headed member of the crowd asking Harry how it felt to be with #Meghan 'as a ginger'. 'It's great, isn't it?!' He replied. #Harry #Meghan pic.twitter.com/taPpdytTVJ

The Royals
From Royal Baby to Big Girl: 23 Adorable Photos of Sweden's Princess Estelle
by Murphy Moroney 11 hours ago

The Royals
Prince Harry Speaks For the First Time on Royal Split: "There Really Was No Other Option"
by Britt Stephens 5 days ago