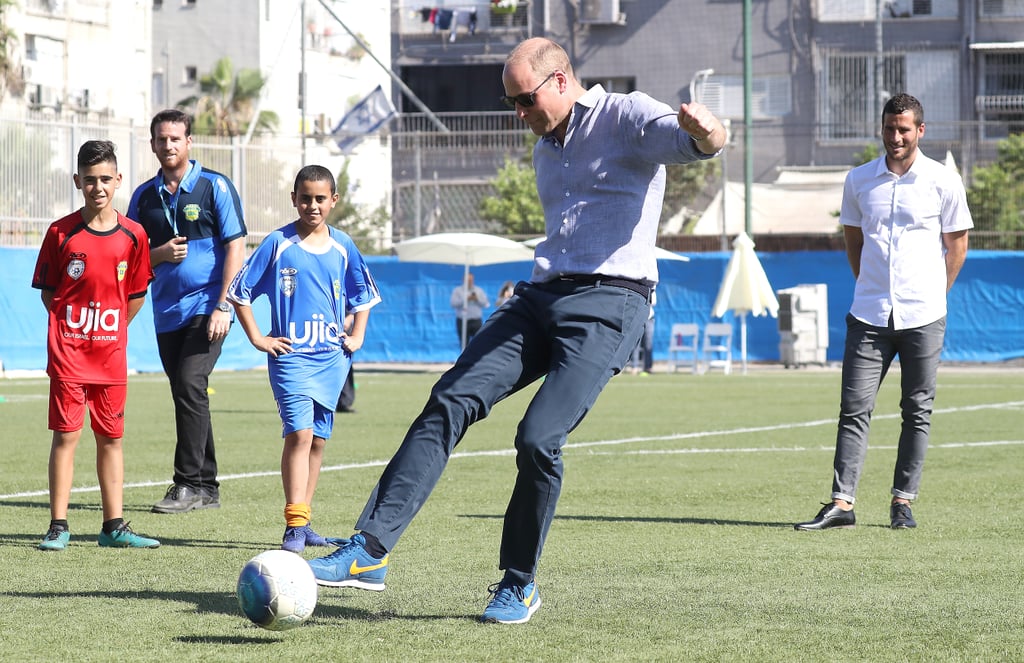 Prince William officially kicked off his five-day tour of the Middle East over the weekend, and from the looks of it, he's having a blast. On Sunday, William was welcomed to Jordan by 23-year-old Crown Prince Hussein, and can I just quickly point out that he is hot? Hussein is the son of Queen Rania and King Abdullah II and will be serving as William's host throughout his two-day visit in the country. "[William] is very pleased that this visit will allow him to begin a relationship with the Crown Prince Hussein that will be important in the decades to come," William's spokesman, Jason Knauf, said in a statement to People. Fun fact: William and Hussein were both students at the Royal Military Academy Sandhurst in England.

William attended a reception at the British ambassador to Jordan's residence in Amman, and according to Hello! magazine, Save the Children's Rania Malki told William that she knew the house where Kate once lived. William reportedly replied, "No way; she will be thrilled. She loved it here, she really did. She is very upset that I am coming here without her." However, William made sure to honor his wife by taking a photo in the same spot Kate and her family had their photo taken back in 1986.

Following his visit to Jordan, the royal touched down in Israel on Tuesday. In Jerusalem, William met with Prime Minister Benjamin Netanyahu and wife Sara Ben-Artzi at Beit Aghion, the official residence of the Prime Minister of Israel. He toured and laid a wreath at Yad Vashem's Hall of Remembrance, then attended an audience with Israeli President Reuven Rivlin. After work, Will got to play: during his visit to a Tel Aviv youth sports program, the noted soccer fan indulged in a game with the kids and was seen scowling at himself after a missed goal.

William's historic tour marks the first time a member of the British royal family has visited Israel on behalf of the UK government. Keep reading to see all the photos so far!