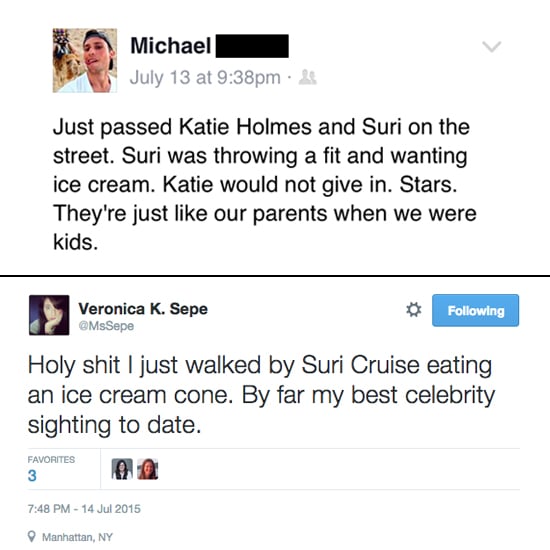 Two people had very different Suri Cruise sightings involving ice cream this week. When told together, these stories perfectly sum up both her dedication to dessert and will to persevere.

It all started on Monday. Michael, who asked to be identified by his first name, spotted Katie Holmes and Tom Cruise's 9-year-old in NYC. "Just passed Katie Holmes and Suri on the street," he wrote on Facebook. "Suri was throwing a fit and wanting ice cream. Katie would not give in. Stars. They're just like our parents when we were kids."

Just one day later, Twitter user Veronica Sepe saw Suri eating the sweet treat. "Holy sh*t I just walked by Suri Cruise eating an ice cream cone. By far my best celebrity sighting to date," she tweeted. Veronica later told POPSUGAR Suri treated herself to chocolate ice cream. "She was with two other girls, and there were no other adults around," she said. "I noticed her little squad at first because I was, like, 'Oh, look at those cute little girls eating ice cream.'"

The fun sightings have us wondering, does Suri have a go-to ice cream parlor she would like to recommend to her fellow Manhattanites?

Suri's 2015 has been nothing short of adorable. In April, the young lady posed for the cutest picture while playing dress-up with her mom. One month before, Suri stole the spotlight at the Nickelodeon Kids' Choice Awards, showing off her sweet smile during a night out with Katie.

Dwyane Wade
Dwyane Wade Shows Off His Fiery Red Hair With Daughter Zaya, and Damn, They Own This Look
by Karenna Meredith 2 days ago

Ciara
Ciara Celebrated Future's Birthday With a Scavenger Hunt, Indoor Camping, and a Sweet Video
by Perri Konecky 14 hours ago

Hailey Bieber
Hailey Bieber and Stephen Baldwin Are 2 of a Kind — See Their Best Father-Daughter Moments!
by Monica Sisavat 5 days ago