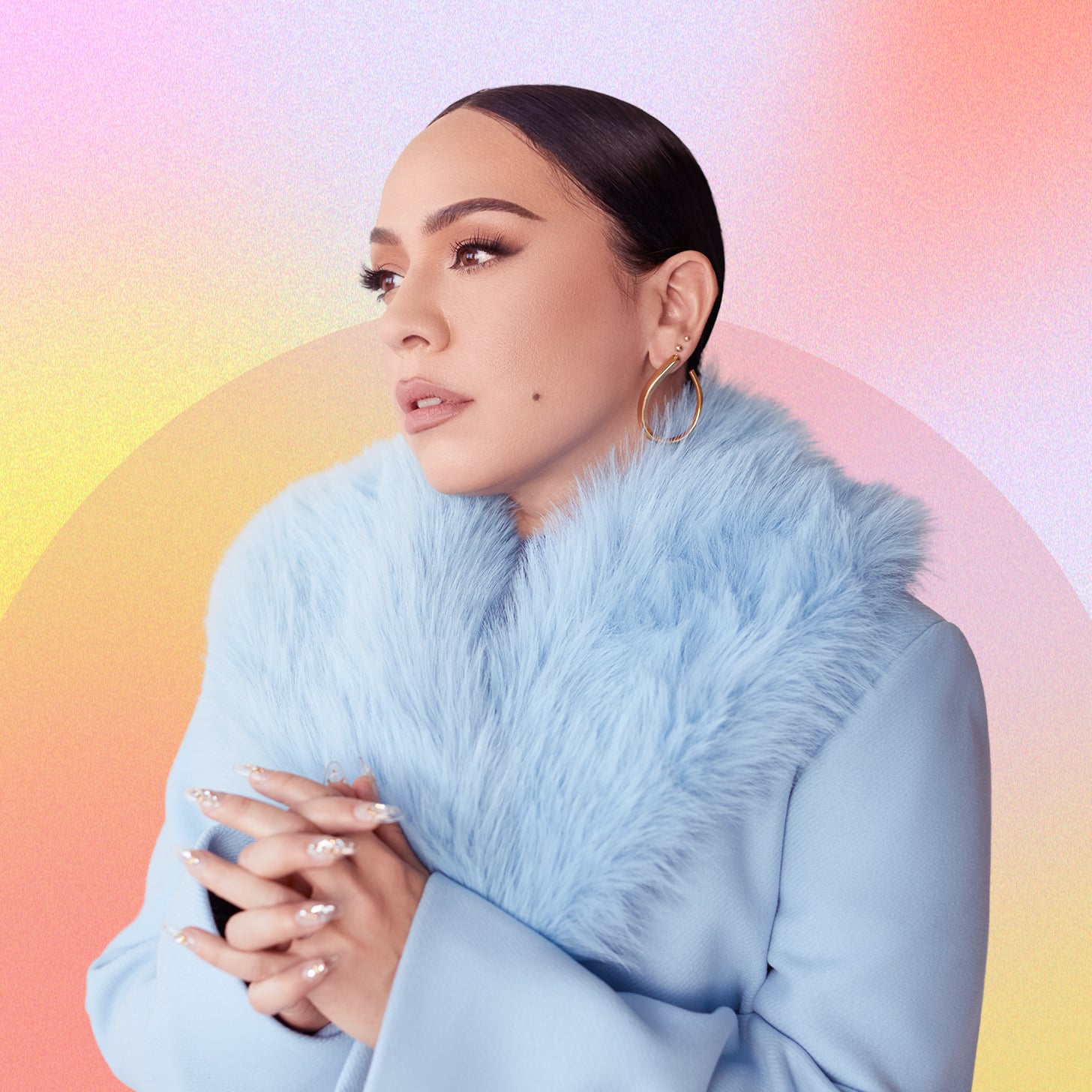 There's this collective belief that the pandemic has birthed the age of agency — what's often referred to as "The Great Awakening." Even as we enter the almost-post-COVID era, many of us have felt inspired to look within to nurture our mental, emotional, and spiritual needs.

For singer-songwriter Carla Morrison, born Carla Patricia Morrison Flores, the past few years have forced her to explore who she is and what she's meant to do in this life. The Mexican-American artist has already enjoyed a successful career — boasting three Latin Grammy Awards and two Grammy nominations for her first two full-length albums, "Déjenme Llorar," released in 2012, and "Amor Supremo," released in 2015 — and became known for her Soprano vocals and mesmerizing songs about love and heartbreak. But while Morrison's songs were capturing our hearts and touching our souls, the singer felt lost. She was anxious, depressed, and unsure if she wanted to continue creating music.

After a decade of building a thriving musical career, Morrison dropped her Mexican management company after her 2017 tour and decided to take a long and much-needed sabbatical for mental health reasons. She relocated from Mexico to Paris with her now-husband and coproducer Alejandro Jiménez in 2019, unclear about what the future held. She was already struggling with her mental health and unsure if she wanted to continue with the music, and things got even harder after she lost her father to COVID-19 in 2021. The bouts of depression led her down a road of self-discovery that inspired her latest album, "El Renacimiento," released in April 2022. It is currently nominated for the Latin Grammys Best Pop Vocal album, and one of the album's biggest singles, "Encontrarme," is nominated for Song of the Year. "El Renacimiento" is not only the first complete album the artist has released in five years but also one of her most vulnerable projects yet.

"Before I set the goal of writing the album, I was really hesitant about coming back to music during my hiatus. I didn't know if I had the mental health tools to confront everything that comes with being in this business, being an independent artist, and publicly sharing my own emotions through my music. I thought I needed time," the artist shares with POPSUGAR via an email interview. "Once the pandemic hit, I was confronted with the question if I would even be able to do this again in my life — if I would actually let it go. But no, I wanted to make music. Music gave me purpose." The 36-year-old shares how she quickly realized that music is how she connects with people.

Once she overcame the thought of never returning to music and realigning with her purpose, Morrison was able to birth the new album — "El Renacimiento" (which translates to rebirth or renaissance in Spanish) as the working title and concept.

"As we all collectively experienced the pandemic, it became crystal clear that I wanted to call it 'El Renacimiento,'" she adds. "I wanted the songs to make sense of my journey. Now, anyone in the world going through something similar can listen to the album and maybe relate."

The album addresses mental health, grief, rebirth, and the joy we can experience once we push through life's hardest lessons. The themes of recovery and coming back to herself are prevalent in the album's tearjerker single, "Encontrarme," with lyrics like, "Ya no quiero seguir/Dejé de Sonreir/Entre todo perdí/Toda razón para vivir/Quiero Volver a mi/La persona que fui." That translates to, "I don't want to continue on/I've stopped smiling and in all of it I lost/All reason to live/I want to return to me/the person I was."

One of the most powerful tracks on the album is "Ansiedad," which translates to anxiety in Spanish. With this song, Morrison wanted to depict what a panic attack is really like. She sings raw and powerful lyrics like, "Quiero hablar y no puedo/Respirar y no puedo/Caminar, olivar, enfrentarlo y no puedo," translating to "I want to talk but I can't. Breathe but I can't. Walk, forget, confront but I can't."

"My music has always focused on love and heartbreak. Sometimes I would touch on personal struggles or feelings of loneliness. But I had never addressed my relationships to mental health."

Morrison says that her anxiety "has always been there," and that it's been a part of her since she was 9. "My whole life has been a journey of self-discovery because I've always looked everywhere for help. I attended therapy sessions. Reiki sessions, healing sessions, ketamine infusion sessions — so many places," she says. "My music has always focused on love and heartbreak. Sometimes I would touch on personal struggles or feelings of loneliness. But I had never addressed my relationships to mental health." The artist shares how confronting her mental health became a new and big chapter in her life that began after she turned 30. "At 30, my own life crisis made me question everything," she adds. "I realized I had to take a stand for myself and really fight for that in order to begin feeling better."

For Morrison, putting out this album was her way of supporting her community of Latinxs who feel alone when it comes to mental health issues. According to the Pew Research Center, Latinx communities are just as vulnerable to mental health issues as their non-Latinx counterparts, but face disparities when it comes to access and quality of treatment. Morrison's intention was to put out an album that makes listeners feel seen and validated in their struggles.

"Older generations did not prioritize mental health. They were never taught to pay attention to that part of their being."

"In the US, we have been talking more about mental health within our communities in Mexico and Latin America. However, many of us still live or have close contact with our families," Morrison says. "Older generations did not prioritize mental health. They were never taught to pay attention to that part of their being. Consequently, they minimize these kinds of struggles."

Morrison adds that she believes that people are now "more inclined to have open discussions about mental health." Still, she says, "there is a lot of judgment and talk of being loco/loca," with older-generation Latinxs still associating mental health issues or having to see a therapist with being "crazy."

Therapy and holistic modalities — along with creating music — really helped the singer get through one of the hardest periods of her life. But it took feeling like she hit rock bottom to realize how healing music is for her, she says. Rediscovering herself in this way hasn't just brought Morrison closer to her to music; it's also changed her music. And it's clearly resonating: fans have lauded the new sound that landed her with two Latin Grammy nominations this year.

"I think 'Encontrarme' is one of the best songs I've written in a long time, and I'm very proud of the album . . . But I think what makes me happy is the people that feel seen from it."

"Since there's so much new music right now, I was not at all expecting to be nominated," she shares. "I think 'Encontrarme' is one of the best songs I've written in a long time, and I'm very proud of the album . . . But I think what makes me happy is the people that feel seen from it. That's what's really important to me. Of course, being nominated and having the Grammys make me and my music feel so special."

In choosing herself, Morrison has also found herself. She's made dietary changes toward her physical health, like reducing her sugar intake. She nurtures her mental health and takes CBD supplements to help with sleep or sometimes cope with her depression, anxiety, or overwhelming emotions. She works out regularly, practices yoga, and makes time for meditation. She goes on nice long walks in Los Angeles, where she currently resides and leans into her support system of family and friends, and prioritizes creativity. Today, she feels peace, joy, and tremendous gratitude for it all. One thing she's clear on is that music will always be in the picture.

"My music has been my partner," she says. "I will always be grateful for the creation of music and its existence [and] the way it chose me to do this style of music with my voice."