Ding, ding, ding! We have a winner, folks. Ciara just took on the viral dance challenge for Cardi B's latest single, "Up," and she didn't just crush it — she absolutely destroyed it. Did you expect anything less from the reigning queen of dance videos?

In a new clip posted to Instagram and Twitter on Wednesday, the singer nails every single move like a boss, repeatedly dropping it low without missing a beat and proving she has knees of steel. Oh, and let's not ignore her enviable surroundings: she's on top of a megayacht in the middle of the ocean, presumably off the coast of Mexico, based on her recent social media posts. We can totally picture Russell Wilson operating the drone to capture all the footage from the top deck, just watching his wife in awe as she breaks it down. 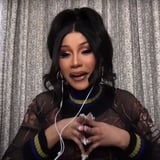 Of course, when Ciara shared her take on the "Up" Dance Challenge, plenty of fellow stars hyped her up in the comments on Instagram. Kerry Washington summed up our initial reaction with a simple "YAAAAAAAS🔥," and La La Anthony wrote, "Challenge OVER," along with a string of supportive emoji. Plus, Cardi B herself reposted the video on her Instagram Stories, thus giving it her virtual seal of approval. Best of luck to whoever else attempts this one in Ciara's wake.