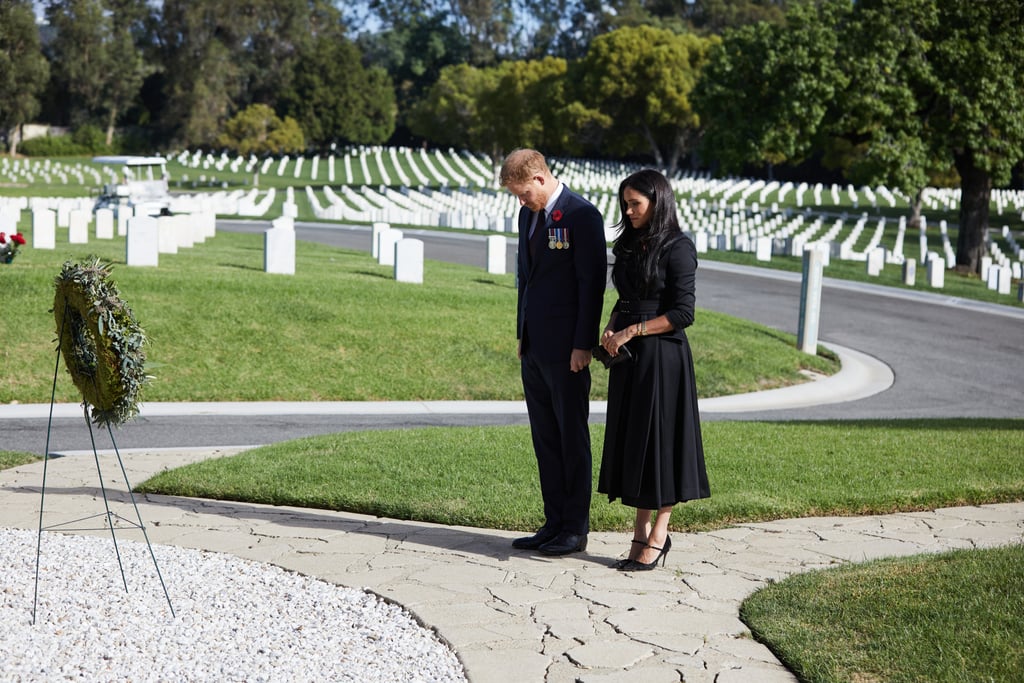 Meghan Markle and Prince Harry recognized Remembrance Sunday in their own way on Nov. 8. Hours after the rest of the royal family participated in the traditional Sunday service across the pond, the Duke and Duchess of Sussex made a private visit to the Los Angeles National Cemetery to pay tribute to those who have served and those who have fallen.

The couple — who wore masks around other visitors — laid flowers that Meghan picked from their garden at the graves of two Commonwealth soldiers, one from the Royal Australian Air Force and one from the Royal Canadian Artillery. They also left a wreath, as is traditionally done on the holiday, inscribed with a plaque that reads, "In Memory of the Men Who Offered Their Lives in Defence of Their Country." Harry also attached a personal note to the wreath. "To all of those who have served, and are serving," he wrote. "Thank you."

Although Harry did not attend the services with his family in the United Kingdom, he did make a surprise appearance on the Declassified podcast for a special Remembrance Day episode. As a former member of the British Armed Forces, Harry explained that he feels an important bond with other veterans. "Being able to wear my uniform, being able to stand up in service of one's country, these are amongst the greatest honors there are in life," he said. "To me, the uniform is a symbol of something much bigger, it's symbolic of our commitment to protecting our country, as well as protecting our values. These values are put in action through service, and service is what happens in the quiet and in the chaos."

See more from Harry and Meghan's Remembrance Sunday tribute ahead.