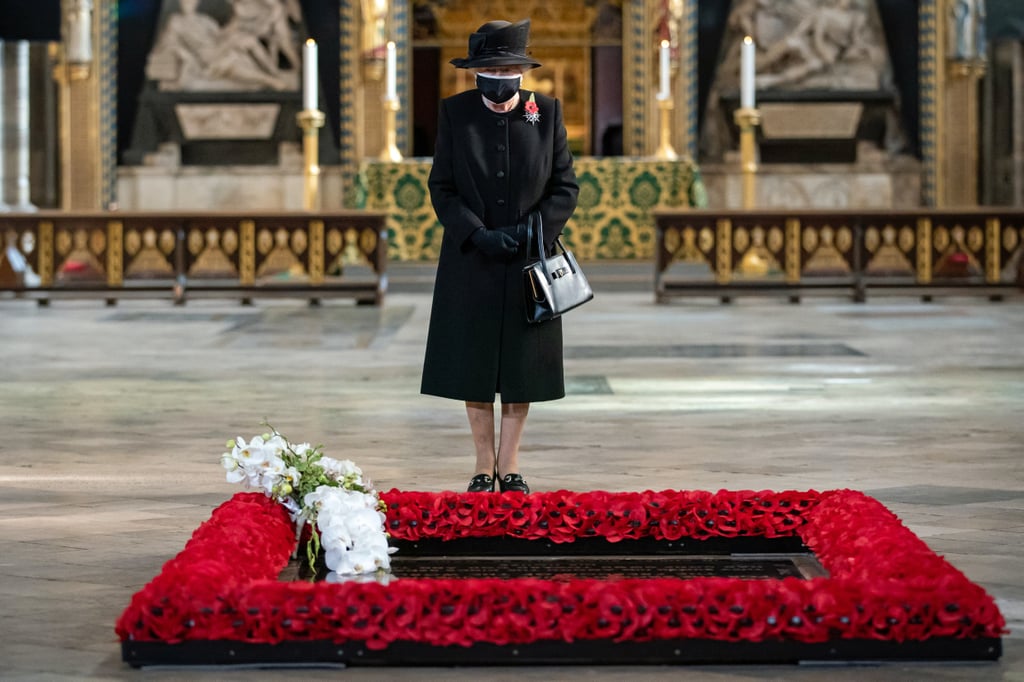 For the first time in history, the service itself took place behind closed doors this year due to the coronavirus pandemic. However, the royal family still took part in the two minutes of silence followed by wreath-laying at the foot of the Cenotaph — an annual tradition that this year was closed to the public and rather broadcast live, with people encouraged to take part in the two-minute silence at home. During the socially distanced ceremony, Prince William, Princess Anne, and the Earl of Essex all laid wreaths at the Cenotaph, as did Prince Charles, who laid a wreath on behalf of his mother, the queen. Prime Minister Boris Johnson, who was accompanied by fiancée Carrie Symonds, and Labour Party leader Keir Starmer also laid wreaths.

Due to social-distancing measures, the rest of the family were not able to watch the wreath-laying all together. Instead, they stood in pairs separated across three balconies of the Foreign, Commonwealth, and Development Office building. Queen Elizabeth II looked down on the proceedings from the middle balcony accompanied by her lady-in-waiting Mrs. Susan Rhodes; Camilla, Duchess of Cornwall, and Kate Middleton stood to the queen's right; and Sophie, Countess of Wessex, watched from the third balcony to the queen's left with Princess Anne's husband, Sir Timothy Laurence.

Prince Harry and Meghan Markle were not in attendance, as they have stepped down as working members of the royal family and are currently living in California. However, that didn't stop the Duke of Sussex from honoring the important day in his own way. The former member of the British Armed Forces made a surprise appearance on a military podcast called Declassified, which had a Remembrance Day special episode. Speaking alongside other veterans, Prince Harry said, "Being able to wear my uniform, being able to stand up in service of one's country, these are amongst the greatest honours there are in life. To me, the uniform is a symbol of something much bigger; it's symbolic of our commitment to protecting our country, as well as protecting our values. These values are put in action through service, and service is what happens in the quiet and in the chaos."

Ahead of the wreath-laying, the queen — spotted wearing a mask in public for the first time — took part in a brief ceremony inside Westminster Abbey to commemorate the 100th anniversary of the interment of the Unknown Warrior. See more photos from the royals' appearance ahead.