In case you were wondering how Hugh Jackman and Ryan Reynolds's feud was going . . . it's still on. On Saturday, Hugh posted a tribute to his wife, Deborra Lee-Furness, for their anniversary, and it didn't go unnoticed by Ryan. While other celebs left the couple their congratulations, Ryan decided to go a . . . different route. To be honest, it just wouldn't have made sense had Ryan, the man behind Deadpool, said anything else besides the comment ahead. I mean, doesn't everyone need to be told to hang in there every now and again?

Despite a short truce in 2019, Hugh and Ryan have shown over the years that the true test of friendship is whether or not they can one up the other. No matter the occasion, the pair have consistently shown up to give the "warmest" of well wishes, complete with a surprisingly well-done political ad on Ryan's part. See Ryan's hilarious comment ahead. 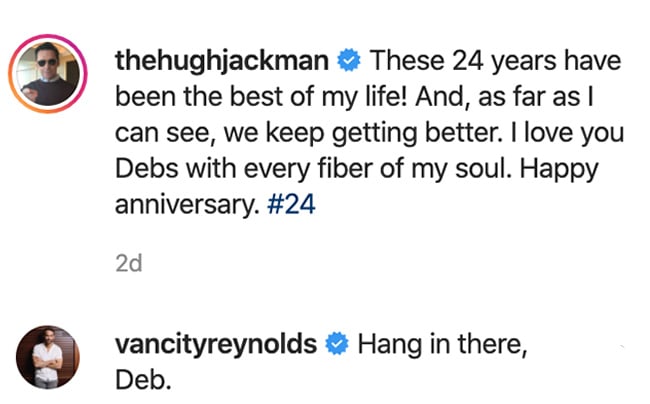