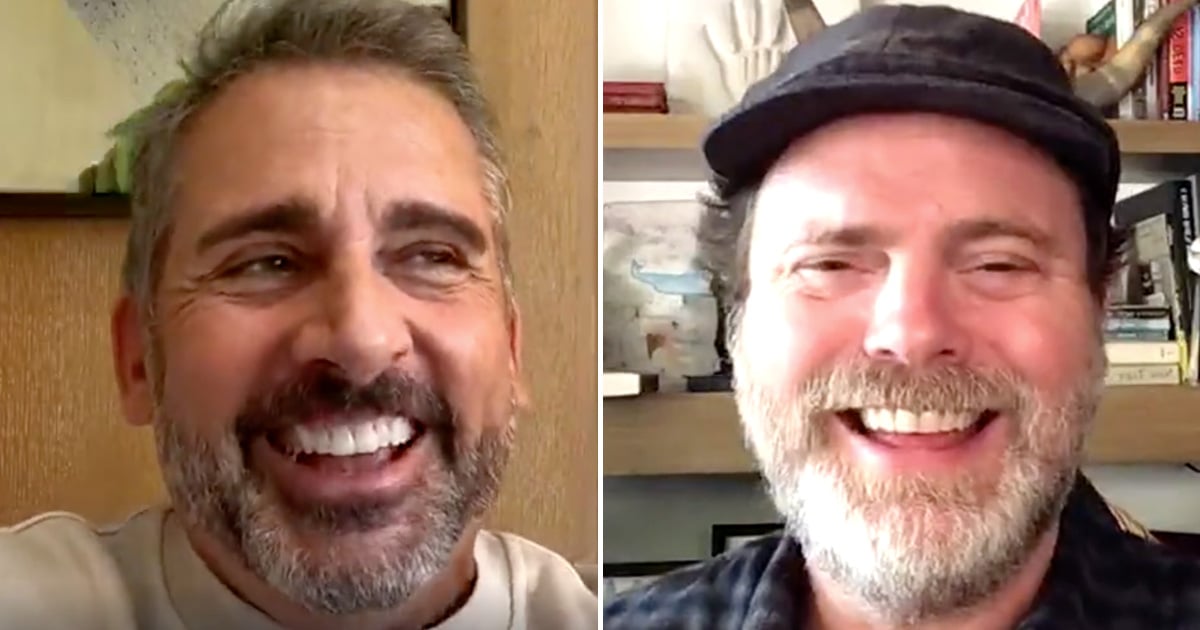 To the conference room! Steve Carell and Rainn Wilson reunited two of Dunder Mifflin's most famous regional managers in the most recent episode of Wilson's Instagram series Hey There, Human on Thursday, and the wholesome video has me smiling like Pam when Michael made it to her art exhibit. During the virtual reunion, Steve and Rainn — with their shelter-in-place beards on full display — discussed how they've been handling the stay-at-home orders and how The Office has made this time a little easier for the both of them.

"The thing that's been really gratifying for me is, during this really dark time, I mean, I've heard from so many people that they've really appreciated having The Office there," Rainn said. "That it has a warmth and humanity to it, kind of a family feel that makes it a special thing and that it's helped them during this time, even helped their mental health." Rainn and Steve also discussed their time on The Office and how impressive it is that their fans know more about the show than they do.

"There's a level of annoyance that seems to be percolating right below the surface of a lot of people . . . Try to counteract it with kindness."

"If you find something that makes you laugh, it is therapeutic. It just is," Steve added. "And, I've said before, when something really makes me laugh hard, there's no better feeling in my book than that pure joy of finding something funny. Again, [The Office] might not be for everybody, but the fact that some people, certainly more than we could have ever imagined, have become fans of it and have immersed themselves in it, in a way, it's really gratifying. I think it's something we should all be proud of."

Steve went on to explain the increased tension he's noticed in the people around him and said that it's important not to brace yourself for confrontation during these times of high anxiety, but to understand that everyone is feeling more on edge than usual. "There's a certain brittleness to people right now and you can feel it," Steve said. "There's a level of annoyance that seems to be percolating right below the surface of a lot of people. And, one of the things that we've tried to be cognisant of is — exactly what you were talking about before — forgiving people for that, accepting that it's hard for everyone . . . Try to counteract it with kindness."

Related:
Rainn Wilson's Home Is a Whooole Lot Nicer Than Schrute Farms — Take a Look Inside

Steve also told the story of his time as a waiter in Chicago, during which he came home from a long day at work only to find that his roommate had eaten the food he was looking forward to all day. "I really thought we'd get into a shouting a shouting match," Steve explained. "He did something — I'll never forget it — he just backed away and said, 'Are you all right?' Like, he reached out. It was such a significant moment for me because I was expecting him to lash back at me . . . It completely disarmed me . . . Disarm people with joy, with kindness . . . Even when you don't want to, putting some kindness out there is never a bad thing."

At the end of their chat, Rainn and Steve jokingly discussed the possibility of an Office reunion where they switch roles. To Rainn's suggestion, Steve said, "I think you could do a great Michael Scott; I don't think I could ever even get close to your Dwight Schrute . . . There is no Schrute but your Schrute." Watch the wonderfully wholesome reunion video here.

Lori Harvey
Lori Harvey Rocks a Sheer, Tiger-Print Catsuit For a Night Out
by Shelcy Joseph 16 hours ago