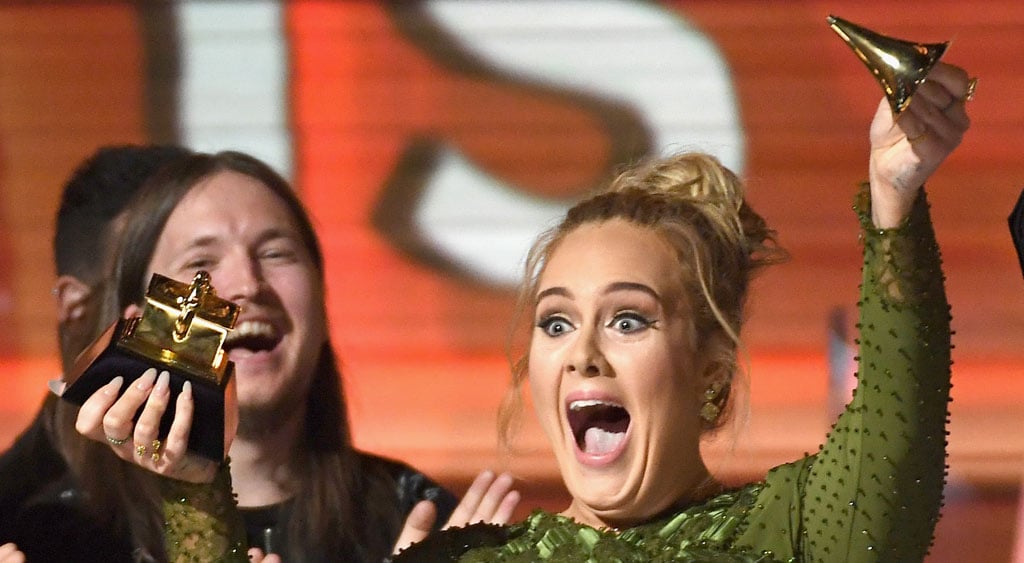 It's no secret that Sunday night's Grammy Awards were all about Adele. Not only did she open the show with "Hello" and pay lovely tribute to George Michael, but she also swept the awards for album of the year, song of the year, and record of the year, plus more. Perhaps the most noteworthy aspect of her night, though, was how much of it she spent focused on Beyoncé. When she won song of the year, Adele spoke to Bey on the way to the stage. Then, during her acceptance speech for album of the year, she again dedicated the award to Beyoncé and called her a dream. She even broke her Grammy in half to presumably share it with Queen Bey.

Back in the press room, Adele followed up on her bittersweet win and gave even more praise to Queen Bey. "My album of the year was Lemonade," Adele said. "A piece of me did die inside as a Beyoncé stan, I'm not going to lie. I was completely rooting for her. I voted for her." Later on in the press Q&A, the subject came up again, and Adele said, "I felt like it was her time to win. What the f*ck does she have to do to win album of the year?" No disrespect to Adele, because she's a legend and she's one of a kind, but we're wondering the same damn thing. And for what it's worth, the internet wants to know, too.

Red Carpet
Mj Rodriguez Celebrates Historic Emmy Nod Ahead of Ceremony: "I Am Testimony That It Is Possible"
by Monica Sisavat 15 hours ago

SZA
Oh No! SZA's Award-Winning VMAs Night Started by Being *Too* Fashionably Late to the Red Carpet
by Perri Konecky 5 days ago