The new American Horror Story teaser might be the sixth season's most perplexing entry yet. Titled "Blind Date," it features a blond actress screaming as some kind of sea monster proceeds to pull her into a body of water. "I have to get back to my sorority," she yells between screams. The thing is, the new teaser positively reeks of vintage Hollywood vibes: the swelling horn-filled music, the classic "Hollywood bombshell" look, and what appears to be a direct homage to The Creature From the Black Lagoon. It's hard not to imagine that we're on a Hollywood film set. Then it hit us: we've been seeing plenty of allusions to classic horror films all along, and this new teaser could be a dead giveaway.

The new season of American Horror Story could take us back to classic horror-based eras in Hollywood. The gilded age of Tinseltown has plenty of fodder, between classics like Nosferatu, Frankenstein, The Mummy, and Psycho. Think American Horror Story: Cinema. This offers a wide range of possibilities. If we headed to a haunted horror movie set, we could see something akin to the story of the Poltergeist curse. We're not the only ones speculating, either. Tons of fans on Facebook, Twitter, and even the AHS subreddit have noted the tropes and running threads through the teasers. We've decided to take it a step further and flesh out every hint we've gotten so far.

Related:
All the Actual Facts We Have About American Horror Story Season 6

The First Round of Teasers, and Their Horror Movie Tropes

At the end of July, the first of all the American Horror Story season six teasers hit the web. There were six in total: "Sunset Stroll," "What's Cooking?", "Descent," "Lullaby," "Milli Crossing," and "Post Op." Two things seemed to be immediately obvious: the teasers really didn't seem have much to do with one another and they were riddled with classic horror movie references. In this group alone, we saw traces of The Texas Chainsaw Massacre, Rosemary's Baby, The Hills Have Eyes or Deliverance, and even perhaps Frankenstein. We were confused, of course, but excited to finally get anything having to do with the new season. Especially since the news pertaining to the season had hitherto been awfully sparse.

On Aug. 9, FX CEO John Landgraf gave a hint about the theme during the Television Critics Association press tour. He said the AHS marketing team "went out and created many more trailers than you've actually seen for hypothetical seasons of American Horror Story, in different genres, different places. One of them is accurate, and the others are all misdirects." He confirmed, though, that "there is a theme and a setting and a place and time . . . but we're not going to reveal it because we think it will be fun for the audience to have the surprise this year." Huh. We started to take the statement at face value: maybe only one teaser is real, and the rest are fake.

The Next Wave of Teasers, and Where It Gets Self-Aware

By mid-August, we'd already fleshed out theories for a forest theme, the return of the Antichrist, and a season focused on a cult. Of course, it was all speculation. Then, a new wave of even more perplexing teasers dropped. We got "The Mist," which could literally be a reference to the Stephen King adaptation of the same name. We got "Wind Chimes" and "Camp Sight," the latter of which hearkens back to alien abduction cornerstones like The Fourth Kind, The Thing, and Invasion of the Body Snatchers. And then . . . there's "Shadow." 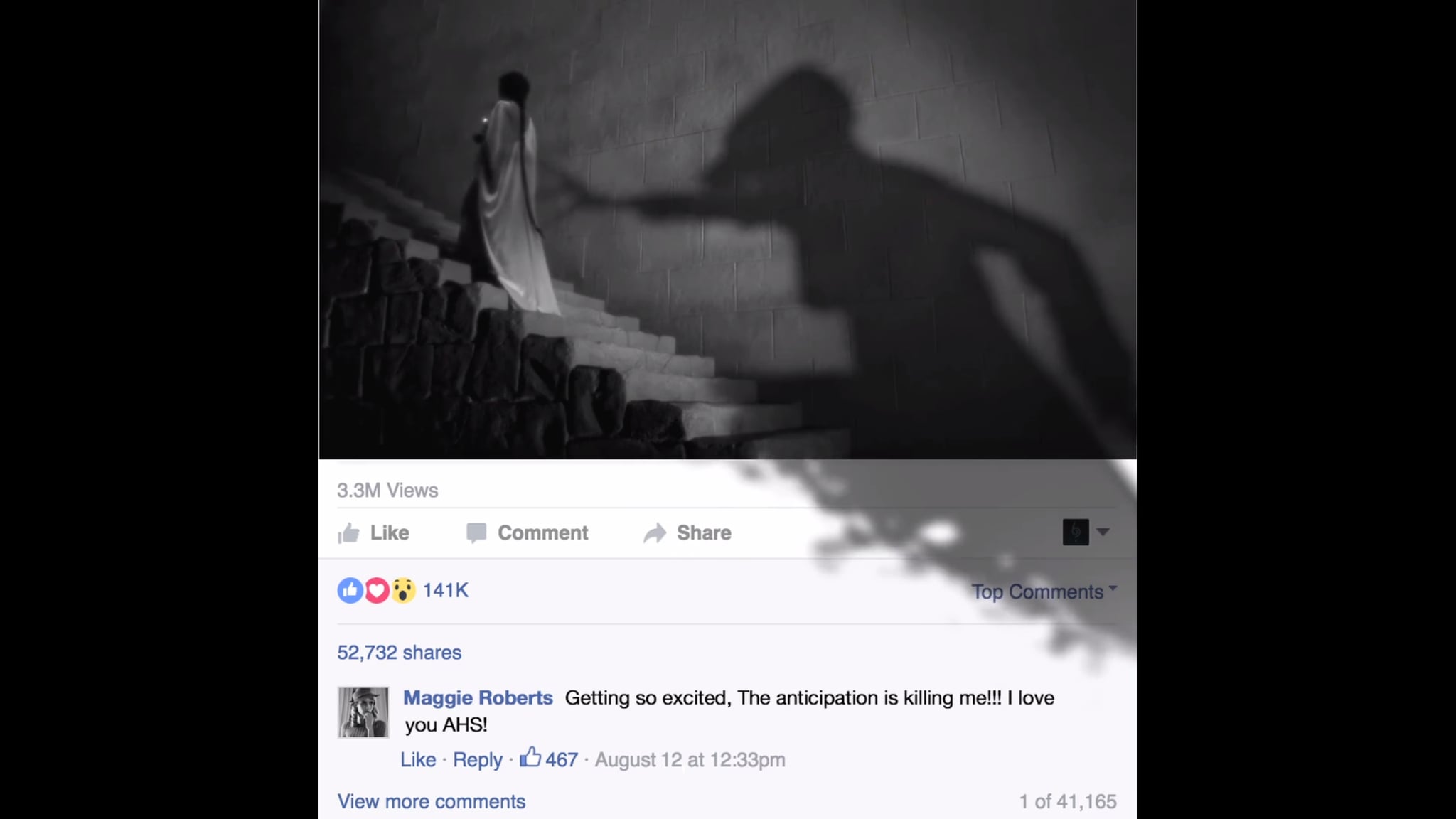 This teaser really breaks the mold: it features a post within a post, as in the video clip actually contains a Facebook comment thread. A certain "Maggie Roberts" has left a comment, and we've discerned the moniker is a mash-up of AHS: Freak Show character Maggie Esmerelda and actress Emma Roberts. Not only did this meta-teaser seem to be a hint in and of itself, but it was impossible not to draw a comparison to Nosferatu. This brings us to our final stop: the aforementioned monster movie teaser.

The "Blind Date" Teaser, and How It Ties Everything Together

And, well, here we are. Not only is this trailer so obviously a reference to classic Hollywood monster movies like The Creature From the Black Lagoon, Frankenstein, Dracula, and The Mummy, but it once again paints the picture of a movie within a movie. This is where we land at AHS: Cinema.

If the season takes place on a horror movie set, all the teasers could have been "produced" as possible projects, while the real horror occurs behind the scenes. In this context, FX CEO Landgraf's comments still make sense: all the "misdirects" are merely fake horror movies, and the "real" teaser refers to the actual theme of what's happening in real life. Even the meta "Shadow" teaser could be considered supporting evidence: the "thing within a thing" model could be an implicit hint about the season's "horror movie within a horror movie" aspect. To me, the "Blind Date" teaser seems like the final nail in the coffin. They're waving a cinematic theme right under our nose.

We know, we know. We can theorize 'til the cows come home, and we still won't know anything for sure until the Sept. 14 premiere. But, hey, you have to admit this one's pretty legit.