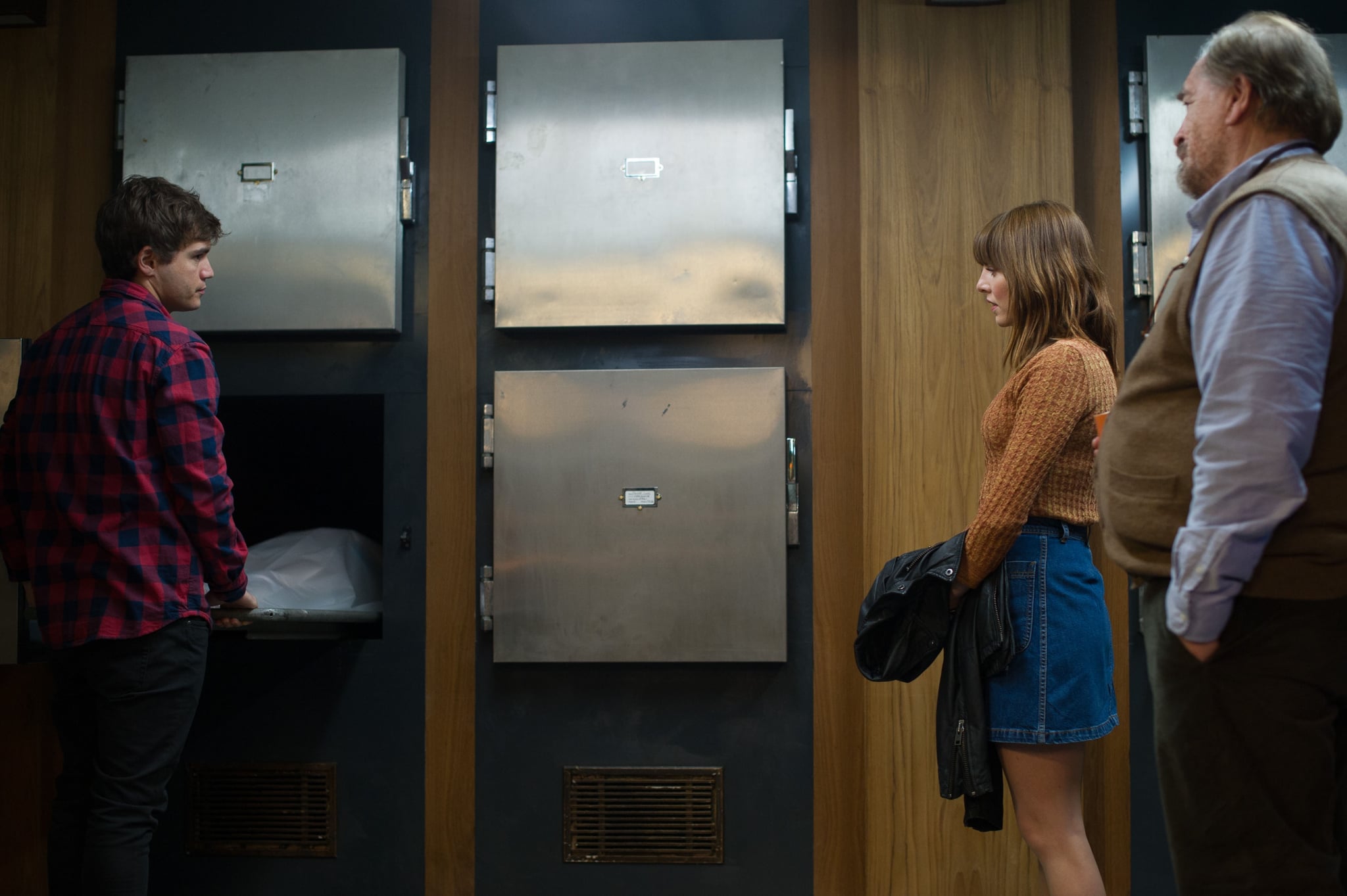 If you've already taken our friendly advice and watched André Øvredal's The Autopsy of Jane Doe, then you know that the supernatural horror film ends on a fairly dismal note. If you haven't taken our advice and watched it, but you want to know what happens anyway, then steel your nerves and proceed with caution while we break down the ending in this simple, deceptively brilliant movie.

An unidentified woman's naked, perfectly preserved corpse is found half-buried in the basement of a home where a brutal, bloody triple-murder occurred, and the body is brought in to the mortuary of father-son coroners Tommy and Austin Tilden (Brian Cox and Emile Hirsch, respectively), who run their business out of the basement of their home. Although Tommy has already wrapped up for the night, the sheriff pleads with him to perform the autopsy that night since the case is high priority and he needs a cause of death by the next morning.

Austin, who has just finished showing his girlfriend Emma (Ophelia Lovibond) a few corpses in the morgue (one of which has a bell tied to its toe like coroners used to do back in the day, just in case the person were to wake up), reveals that he hasn't yet worked up the courage to tell his father that he's made plans to move out and do something else with his life. Emma asks him to go to the movies with her, but feeling guilty about his secret, Austin chooses to stay and help his dad with the autopsy of Jane Doe, telling Emma to come back in a few hours so they can catch a late showing at the movie theater.

That Doesn't Sound So Bad — Is the Body Haunted or Something?

That's what Austin and his father gradually realize they have to find out. They begin the autopsy like they would any other; Jane Doe is placed on a table in the middle of the room, and a video camera is set up to record everything that happens while Tommy narrates his actions. An intense storm begins raging outside, which kills the power to the morgue's elevator (a generator is keeping the lights in the exam room running) and knocks a large tree onto the cellar doors, effectively trapping them in the basement until it passes. The corpse's fingerprints are nowhere in the system, so they begin an external examination of her body to look for clues as to how she died. They find peat soil underneath her fingernails (which is only found in the Northeast). They also notice that her body has suffered grievous trauma despite no outward marks: broken wrists and ankles, a ripped out tongue, mutilated genitals, a missing tooth, severely burned lungs, and internal organs covered in scar tissue (consistent with stab wounds).

The more they uncover within Jane Doe, the weirder their outward surroundings become. Their phones stop working, the radio in the morgue turns on by itself, their cat is mysteriously (and fatally) injured, and three other bodies go missing from their storage chambers. Once they find her missing tooth wrapped in a cloth covered in Roman numerals in her stomach, and see similar symbols tattooed on the inside of her skin, the lights in the morgue explode and they race to Tommy's office for safety. Outside of the office door they hear a bell (presumably the now-animated corpse with the bell tied to his toe), and something attacks Tommy, leaving him with bad internal injuries.

They decide to burn her body, but the fire doesn't harm her. All it does is spread across the examination room and destroy the photos they'd taken of her corpse and the video camera. They hear the elevator come back on and are followed by the animated corpses as they rush to get in. One of the bodies attacks Tommy, so he uses an ax to hack it apart. When the dust settles, they realize that the living corpse was actually Emma, Austin's girlfriend. He's devastated, and Tommy is flooded with guilt.

They return to the exam room to finish it once and for all, and Tommy cuts open her skull. Austin puts her brain tissue under a microscope and sees it's still alive, undoubtedly due to some kind of supernatural force. Upon further inspection of the cloth they found in her stomach, they deduce that the Roman numerals read '1693,' and find the name of a Bible passage, Leviticus 20:27. Tommy looks up the corresponding passage and finds that it condemns witches.

Is She a Witch, or What?

Although Austin thinks she obviously has to be a witch who was executed during the Salem trials in the late 1690s, Tommy disagrees, saying that the women who died were merely the victims of mass hysteria. He also notes that the corpse's extreme injuries are at odds with the methods used to suss out a witch during the trials. This leads the elder Tilden to deduce that Jane Doe wants revenge for what was done to her, so he leans down and whispers that she can have him, as long as she leaves Austin alone. Tommy is then sacrificed to her, graphically enduring each of the injuries her body suffered. Jane Doe appears to be sucking his life force into her own body, with color returning to her skin and her eyes becoming clear. Austin kills his father to put him out of his misery and stop her.

The lights finally come back on, and Austin can hear the sheriff outside saying how they're working to get the tree off the cellar doors. He runs up the stairs to where the doors are, realizes that the sheriff's voice is simply another one of the witch's hallucinations, and turns to see a very dead Tommy standing next to him. Startled, he trips backward over the railing and dies after breaking his neck in the fall. The sheriff actually arrives not long afterwards, coming upon Emma and the Tildens' remains and the perfectly intact body of Jane Doe. They zip her back up and put her in a van to transport her to a neighboring county, where it's suggested her cycle of carnage will start again.

So We Never Get a Definitive Answer About What She Truly Was?

No, and it works. Whether or not she was a straight-up witch, like Austin thought, or Tommy's theory that Jane Doe became supernaturally vengeful after being horrifically tortured was correct, the ending keeps things vague. Shocking horror movie twists are great, but a bleak-as-hell ending where the heroes don't prevail can be just, if not more, affecting.

Idris Elba
A New 007? Idris Elba May Replace Daniel Craig as the Next James Bond
by Njera Perkins 3 hours ago