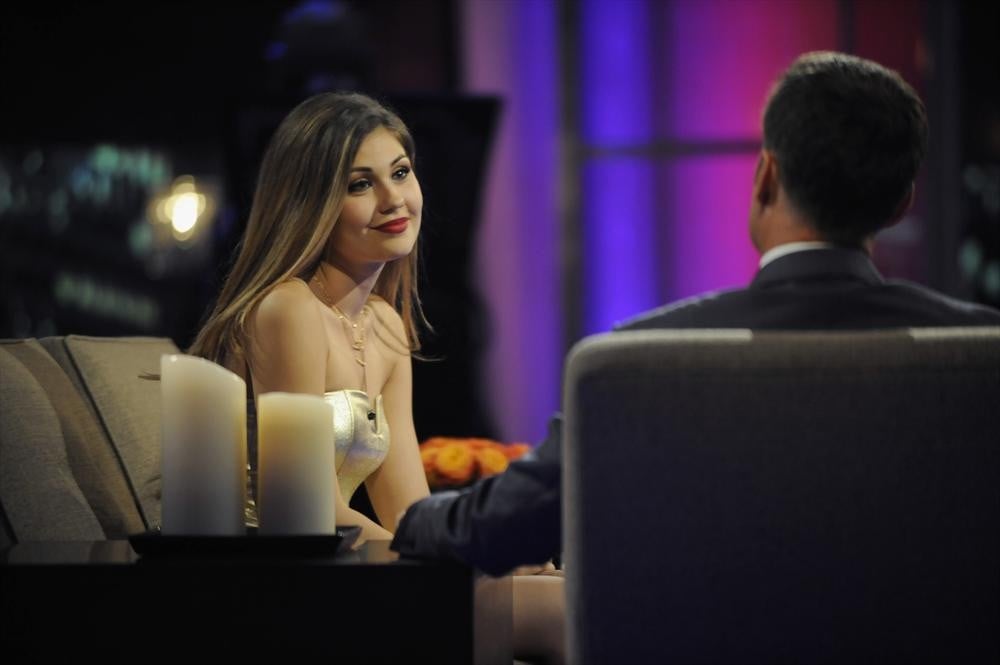 Britt Nilsson, the beautiful LA waitress who received Chris Soules's first impression rose on this season of The Bachelor, has been one of those contestants you either love or hate. And if you watched Monday's "Women Tell All" episode, it's clear that the other women felt the same way. Britt had an emotional night in the hot seat, squaring off against Carly about accusations that she was lying to Chris and being fake. I sat down with a very tearful Britt immediately following the episode's taping, and she opened up about everything from if she'd consider being the next Bachelorette to if it's possible to be friends with women you're sharing a boyfriend with. Read the interview below.

POPSUGAR: That was tough. How do you feel?

Britt Nilsson: I'm glad it's over; that's a major emotion I'm having right now. There are tiny parts of me that wanted more questions answered, but it's really not in my nature to go hard on people, so you know I asked Carly, "Why did you fake and pretend to be my friend?" but she didn't give me an answer. But that means she wasn't going to, and I just had to leave that at that. It's not my job to prove her intentions because I think they were fairly clear, and people will make up their own minds.

It was hard. For whatever reason, people really think negatively of me, and I just never thought I would be that person coming on this show. It's still pretty painful, because I didn't really understand it, and I still don't understand it after this. But at least I got to speak up for myself, because I feel that the last couple episodes I'm living my life and then someone's narrating over it, and that's how people have been viewing me — just kind of these spiteful narrations over my life. I'm glad I got to — now knowing what they've been saying — speak out and defend myself. I hope the damage hasn't been totally done. I'm glad we had it, but it was not fun, really.

PS: Was it tough to see Chris?

BN: It was good to see Chris. It was kind of hard and weird, but I'm glad it happened because the way we ended was not how I wanted to end things, and I don't think that's how he wanted to end things. I think he has more clarity too after watching it so that was nice to hear. We hugged it out again — kind of came full circle.

PS: Why do you think you had a target on your back?

BN: The thing that's still confusing to me is I still don't feel that anybody gave me an answer as to when I was fake or what I did. So that is just so hard — I feel like if I had an example I would either own up to it or say "no," but there were just no real, solid examples.

PS: What has been the reaction since you've come home?

BN: People that are in entertainment come up to me and say, "We think you're great, we get what's going on," and that's fine, but the housewife in the Midwest is probably like, "She's the devil!" So that's why I'm trying to cling to who I know I am and the way I know I did the show and just kind of let other things fall away because I know the truth.

PS: How did your family and friends react to watching the show?

BN: They were shocked. My roommate wants to break the TV while she's watching it; she freaks out. We've lived together for seven years. She's my favorite person ever, and she's being a bigger-sister type and wanting to chase these people down and say, "Why would you say that about Britt? It's not true." My mom is just crying, of course, but my family has been very cool and very supportive, and they just keep saying, "It's all going to be OK. You are who you are and that will shine. Even if everybody doesn't see it, there are people that will and that's what this is about. And you know how you lived it," which I do, and so I have peace about it. It's just more shocking than anything.

PS: Would you consider being The Bachelorette, or are you sort of over it all now?

BN: If you had asked me right after I left, I would say, "There's no way I'm ever doing this again." It was so raw at that moment. But looking back, even as bad as it was, I still learned a lot about myself and I still really did develop feelings for somebody. As crazy as it is, it worked, and I feel like it could have worked even better had the cards been rearranged differently. So, of course I would do it. I don't think Chris regrets doing it, and it was emotional for him. Falling in love is emotional.

PS: What did you learn about dating from the experience? Anything you will or won't do in your next relationship?

PS: Do you think you can really be friends with people who are all dating the same person?

BN: Well, you hang out with the other women, which is why it's so inconceivable to me that they say one thing and act the other because we were in such close quarters. You're living on top of each other, so you play cards, you braid each other's hair, you paint your nails a lot, you make up silly road-trip-type games, and that's it! And you eat a lot. There's nowhere else to be. So that's why it was so hard to watch people being totally different in their private interviews because I was so close to them.

PS: Was there anything annoying about yourself you noticed while watching the show?

Netflix
Dismantling Maggie's Big Mystery on Space Force: Why Is She in Prison?
by Hedy Phillips 2 hours ago